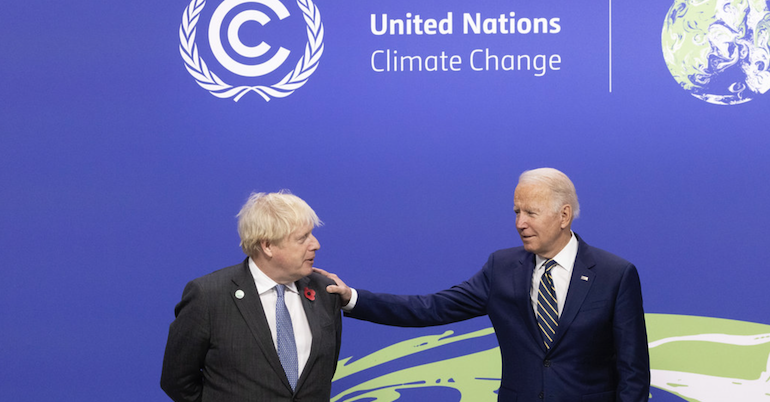 The next climate conference – COP27 – is taking place in Egypt between 6 and 18 November. Recently, Rishi Sunak has faced a lot of flak for choosing not to attend the event, before ultimately u-turning on the issue.

But should world leaders like Sunak attend the event? According to a climate academic, the answer to that is ‘no’. Here’s why.

Save the emissions, and the COP27 bullshit

Dr Jennifer Allan is senior lecturer in international relations at Cardiff University. She describes her focus as global environmental politics, including climate, chemicals, and waste. In a thread on Twitter, the lecturer laid out why world leaders specifically shouldn’t attend the COP27 climate conference:

Does Rishi Sunak really need to go to #COP27? Does any world leader?

In a word. No. And frankly they shouldn't.

Allan noted that the gathering of leaders at the conference is supposed to raise awareness of environmental issues. But she pointed out that such understanding is “pretty high already”. She also highlighted that although leaders are supposed to report on the headway they’ve made and make new pledges at the event, this doesn’t necessarily equate to meaningful progress:

The hope was bringing them all to Glasgow would lead to better pledges.
Only India, China, and South Korea upped their game.

Moreover, the academic said that leaders don’t even have a particular role at the upcoming COP27, compared to some previous gatherings:

No new pledges are due.
Only 24 countries put forward something new or updated after all agreed to revisit their 2021 pledges.

So nothing to announce.

Critically, she suggested that the event provides leaders with a platform to make grandiose pledges that they rarely live up to. We need action not words, she concluded, so leaders are better off “sav[ing] the emissions of their private flights”:

If leaders have nothing to to say, and haven't lived up to past promises, then maybe they shouldn't be at #COP27.

We don't need more speeches. We need action. The leaders can save the emissions of their private flights.

As the United Nations Framework Convention on Climate Change’s (UNFCCC) primary decision-making body, the climate COPs are a critical space for governments to come together to thrash out how to make good on the treaty. The events also provide a vital space for civil society to make its voice heard.

But Allan’s argument on whether world leaders specifically should attend is compelling. The events do give these individuals – and corporations – a rather large megaphone to trumpet about what excellent environmental saviours they are, which they regularly fail to deliver on.

The academic highlighted a recent case in point. The UN released its emissions gap report on 27 October. The report essentially identifies the chasm between leaders’ rhetoric and their pledged efforts on reducing greenhouse gas emissions.

The 2022 report showed that current climate pledges from governments lump the world with a temperature rise of around 2.4 to 2.6 degrees by the century’s end. There’s wide consensus that 1.5 degrees is the level of global heating beyond which impacts would be cataclysmic. The warming level is currently between 1.1 and 1.2 degrees.

The UN further pointed out that, since COP26 in Glasgow, country pledges have pitifully knocked less than 1% off projected greenhouse gas emissions for 2030. We need a 45% reduction to stand a chance of achieving the 1.5 degrees warming limit.

No wonder the UN general secretary, António Guterres, decried the lack of climate leadership as “criminal” earlier this year. Perhaps Allan is right that we shouldn’t be giving world leaders time at a very public pulpit to claim otherwise.