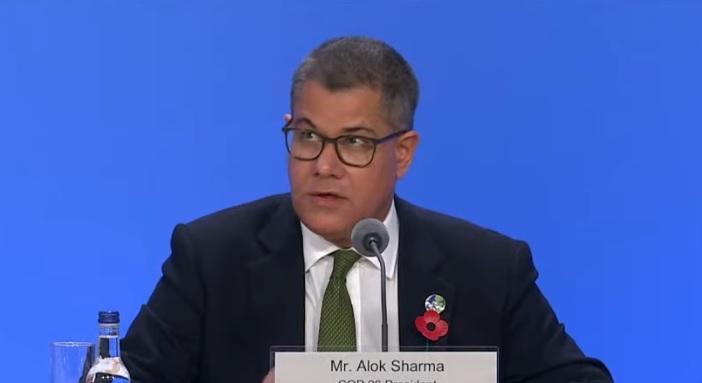 As the COP president was delivering more ‘blah, blah, blah’ on 6 November, nature showed up with force.

He was making his comments in the makeshift, cavernous press conference room that the never bashful COP26 officials had named the Giant’s Causeway. This sterile space for alleged giants was no match, however, for nature. She whipped at it and thundered down on it with wind and rain, making an enormous ruckus at times, as Alok Sharma and other officials tried to hold court – and the attention of journalists – inside.

Not one of these humans acknowledged nature’s wrath. At one point Sharma paused and cast his eyes skyward in fear or annoyance – maybe both. But that was it. That’s all the attention the special guest got.

This non-reaction was bizarre because we were all there to discuss nature. It was ‘nature day‘ at COP26. But when she came banging at the roof, perhaps hoping for a seat at the decision makers’ table, she was not welcome.

The Global Alliance for the Rights of Nature (GARN) held a two-day tribunal during COP26. As you’d expect, it functioned like a trial, with prosecutors, witnesses, evidence, and judges ruling on two cases. But they weren’t your bog standard, anthropocentric (exclusively human-focused) proceedings. Instead the tribunal centred around the Universal Declaration of the Rights of Mother Earth. This is an initiative that emerged from the 2010 climate conference in Bolivia. The declaration and the tribunal effectively place the worldview that many Indigenous peoples have held for millennia in a legal framework.

The first tribunal day took on “false solutions” to the climate crisis, namely the sort of things that policymakers are promoting. On the second day, the “threatened living entity” that is the Amazon was front and centre.

As GARN pointed out, its aim was to:

bring maximum visibility to the current key struggles to protect the world’s ecosystems and confront the false solutions that are being presented in the face of these crises as well as the solutions emerging from civil society, and to offer legal rulings and precedents that may aid communities and activists in their struggles to protect and restore these ecosystems, and advance the legal recognition of Nature as a rights-bearing entity.

Defending and conversing with the sacred Earth

People from around the world gathered for these events, both in person and virtually. Unlike COP officials, they didn’t leave nature out in the cold. In fact, they came together to demand respect for her rights, and the rights of all her living inhabitants – including their own.

In his submission for the false solutions tribunal, the Indigenous Environmental Network’s (IEN) Tom Goldtooth insisted that “we have to protect the sky” against “CO2 colonialism”. He also argued that we have to “defend that sacredness of Mother Earth for future generations” of human beings and “all life”.

President of the Huni Kuí Federation of the State of Acre chief Ninawa gave testimony at that event too. He spoke about the violence wrought by extractive industries against both his people and nature. Earlier, he had explained that “indigenous people don’t speak for nature, we speak with nature” and that maintaining their traditional knowledge systems is needed “precisely to be able to continue that dialogue”.

Indigenous people who spoke at the tribunal and elsewhere regularly highlighted the reciprocal relationship they have with nature. As the Citizen reported, Sônia Guajajara, executive coordinator of Brazil’s Indigenous People Articulation (APIB), commented that:

Our lives are inextricable from the natural world. The creatures of the rainforest protect us, and in turn, we protect them.

Meanwhile, at another COP26 side event titled Protecting Mother Earth: Sacred Guardianship and Ecocide Law, founder of the Juma Institute Juma Xipaia highlighted that its not just indigenous peoples who are “guardians” of nature. All people have a responsibility to take care of “the forests, the oceans and all the nature around the world”, she said. Xipaia told the event crowd that “we are the same human beings, we live in the same Earth, the same planet we share together”.

Ask not what you can do for her

These assertions were a far cry from what was coming out of the mouths of officials – and what was plastered on screens and stands – in the main COP venue. Don’t get me wrong, nature was a major focus there too. But the general narrative was ‘here’s all the wonderful ways we can use nature to solve our problems!’ Daniel Voskoboynik, author of The Memory We Could Be, summed this up well:

So much of the mainstream conversation around climate change remains lodged in a worldview that has led to this crisis: a vision of nature as a thing that can be controlled, negotiated, remodelled, manipulated, and accounted for. /2

The other talking point on offer was ‘we must protect nature because it does stuff for us‘. In this narrative, the value of reciprocity was attributed solely to utility and prioritised the ‘us’ in the equation.

I sometimes strap myself into a similar narrative straitjacket when writing about nature. I find myself feeling like I need to explain what nature offers to people in order to legitimise any plea on her behalf. That’s not a difficult task given that nothing – and I mean nothing – exists in any homo sapiens’ life that doesn’t come from or involve nature. But it’s an alienating one. It places ‘us’ on one side and nature on the other. It also only prescribes value to the latter for serving the former.

The elites of the world I was born into, however, worked for centuries at making this just so.

Jason Hickel details one significant period in the transformation from European peoples having a “reciprocal” and close relationship with nature to being – and feeling – severed from her in his book Less is More: How Degrowth Will Save the World. The transformation involved both physical and psychological changes that elites imposed on populaces, largely in the 16th and 17th centuries, so that they could profit from overexploiting the Earth.

They stole peoples’ land and fenced off the commons, transforming nature into their ‘property’, in a process known as enclosure. This is still very much the norm in modern England. The elites also traversed the seas to do the same – and much, much worse – abroad.

They brainwashed people to think of nature not as a life-giving mother but as a “common harlot” who needed to be “restrained” and “bound”. And they worked to ultimately characterise this dangerous ‘harlot’ as an ‘it’, ensuring that people imagined themselves as “fundamentally separate from the rest of the living world, and to see other beings as objects”, Hickel wrote.

The spoils of kinship

But in the tribunals, this severing wasn’t present. Quite the opposite was true. A spirit of kinship with the Earth and its living inhabitants filled that room. The sense of belonging, not separation, reigned supreme.

In terms of planetary health, its pretty clear that this sort of worldview is better for everyone involved. Although indigenous peoples’ make up around 5% of the world’s human population, their lands are home to as much as 80% of the Earth’s remaining forest biodiversity.

Moreover, people who have succeeded in getting this way of thinking reflected in state law, through recognition of the rights of nature, are better able to fight against destructive activities.

Cutting through the corporate crap

One of GARN’s over-arching objectives is to get such recognition into legal systems at large, precisely because that “is one of the most transformative and highly leveraged actions that humanity can take to create a sustainable future for all”.

The verdicts for the Glasgow tribunals illustrate the potential such a system has. By recognising the rights of nature, and all peoples, the tribunal judges found that the vast majority of climate crisis ‘solutions’ proposed by officials, such as carbon offsets, carbon capture and storage, and geoengineering, represent continued violations against the Earth that will do little to stem the emergency. They said:

A number of these so-called solutions to climate change are not in fact solutions, but simply ways to keep the fossil fuel industry in business for decades to come, continuing to pollute and destroy.

Ultimately, the judges concluded that meaningful international action lies in the prohibition and closing of extractive industries such as oil and mining, particularly those of high impact, and their associated activities. Extraction for green technology can also be destructive.

The judges further called for a de-commodification of the Earth in their recommendations.

Rethinking life itself on the planet

In the Amazon-focused tribunal verdict, judges condemned those responsible for the crimes of “ethnocide, ecocide, and genocide against our Amazon and its peoples”. They named banks, corporations, and states as the perpetrators of these crimes. They called for the eradication of violence against indigenous peoples and the recognition of their territories, among many other measures to protect the Amazon. The judges highlighted that:

the struggles of resistance and re-existence of these peoples are the main action against the effects of climate collapse worldwide; struggles that, moreover, offer powerful options to rethink life itself on the planet

This ‘rethink’ – to a worldview that recognises nature (and all the lives contained therein) as a rights-bearing entity – was integral to the tribunals. But it was absent from official discourse at COP.

That policymakers aren’t generally found arguing for recognising the rights of nature comes as no surprise. Because in many cases, they are cut from the same cloth as the elites who enclosed commoners’ land and violated people and their territories in the wider world in centuries past. And a worldview that recognises the Earth’s rights and the rights of all her living inhabitants disempowers the elite. It’s a direct threat to a system that takes the Earth’s abundance and funnels it to the benefit of the few.

That’s one of the many reasons why I think people should embrace this worldview and, in the words of an indigenous speaker at a rally in Glasgow, “reforest our minds”. It’s an act of rebellion against a system that’s benefitted the few but is destroying us all. It’s an up yours to the divide and conquerors who’ve robbed the majority of a sense of belonging with the Earth.

I’ll leave you with one final thought. The fossil fuel industry emerged from COP26 relatively unscathed, despite being largely responsible for the climate crisis. This industry trades in death, literally. It has colonised ancient matter, the decayed bodies of past animals and plants, that belongs with the Earth. Corporations burn this matter, and having convinced the rest of us that they ‘own’ these fossils, they sell this death back to us as fuel at a very tidy profit. It is this trade in death that is killing us.

Recognising the rights of nature offers an alternate path to that. It’s a chance to stand with the living.