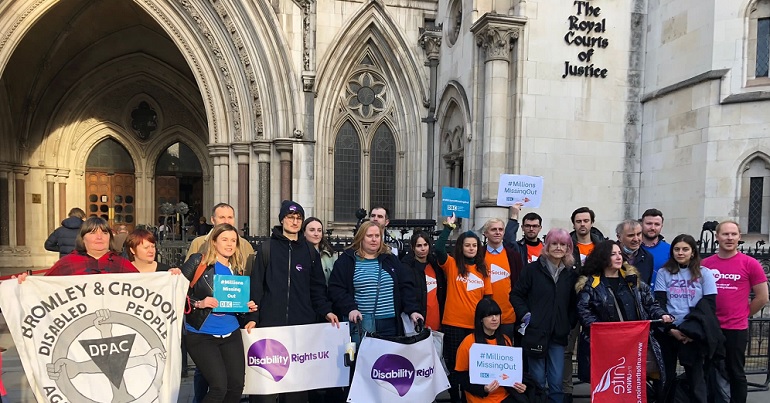 The Department for Work and Pensions (DWP) was in court on Wednesday 17 November. It was over its failure to support chronically ill and disabled claimants during the coronavirus (Covid-19) pandemic. But campaign groups ensured that the case against the DWP did not go unnoticed.

During the pandemic, the DWP increased Universal Credit by £20-a-week. But it did not do the same for people on so-called legacy benefits. This included social security like Employment and Support Allowance (ESA). Disability rights activist Paula Peters previously told The Canary:

the Tories completely overlooked and ignored legacy benefit claimants during the pandemic. Many of these 2.2 million claimants are disabled people. Some were also shielding. Living costs rose and disabled people couldn’t afford the most basic standard of living…

But the DWP wasn’t going to get away with this that easily.

As The Canary previously reported, two disabled people are using legal aid to mount a judicial review. This is over the DWP’s failure to uplift legacy benefits in line with Universal Credit and Working Tax Credits. Firm Osbornes Law is representing them, and it’s looking at the government’s decision not to give an uplift to ESA. The case will argue that this is discrimination under the European Convention on Human Rights, because the claimants are disabled people.

So far, things have gone far from smoothly. Because of a shortage of judges and a backlog of cases, the High Court pushed the claimants’ judicial review hearing back from the end of September to 17 and 18 November. Then, at the last minute, the court changed the date of the second day to 19 November.

The case is important, because it could affect millions of claimants. As the Mirror reported, people could be entitled to up to £1,500 in payments if the DWP loses the case. So, campaign groups and politicians were outside the High Court on 17 November in solidarity with everyone affected.

Team @mssocietyuk out in force at the Royal Courts of Justice to support the appeal to rectify the unfair decision to not give legacy benefits the £20 uplift #MillionsMissingOut #20More4All pic.twitter.com/RykDEjidHk

This morning I joined activists outside the High Court to support the two disabled people starting their legal challenge.

It was wrong that the Government refused to apply the £20 uplift to nearly 2 million disabled people during the pandemic. #20More4All #MillionsMissing pic.twitter.com/6D7z6HWvUh

Proud to stand in solidarity with disability rights campaigners outside the High Court today. The British Government’s decision to exclude legacy benefit claimants from the £20 uplift was shameful and I wish the litigants every success. #MillionsMissingOut #20More4All pic.twitter.com/RtSGRnAiFI

It’s unlikely the outcome of the case will be known by 19 November. But either way, the strength of feeling among some campaign groups and MPs is clear. The DWP would do well to listen.

If you have a case relating to social security or housing, Osbornes Law may be able to help. Find out more here.