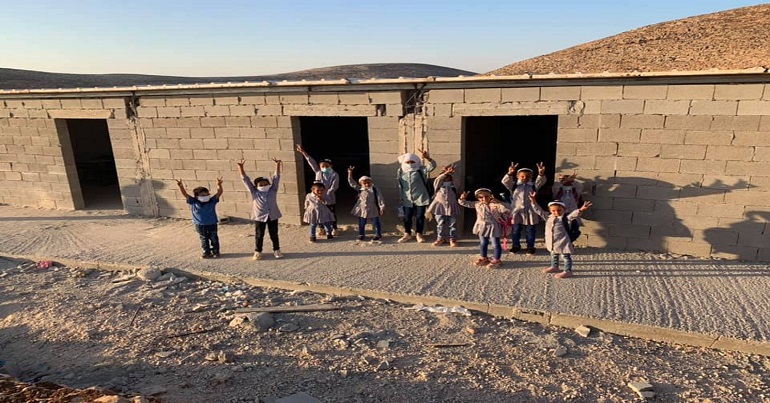 It says local campaigners are currently defending these schools from demolition and fighting:

back against Israeli illegal settlement expansion and ethnic cleansing.

Denying Palestinians the right to education

The Jordan Valley is in Area C of the West Bank, which is effectively under complete Israeli control. STW says Israel is using that control to deny the local Palestinian Bedouin communities a right to education. It does so by demolishing existing schools and stopping the building of new schools and kindergartens.

Israel weaponizes the denial of education to Bedouin communities in the Jordan Valley as a coercive measure to ethnically cleanse them from their lands.

As of 2019, the Israeli occupation has given over 42 schools in Area ‘C’ orders to be partially or totally demolished. The following schools which particularly serve Bedouin communities in the Jordan Valley are among the threatened schools by demolition.

One of the five schools under threat is the Al-Maleh school. It was built at the end of 2020 with four classrooms. In September 2021, STW and the Middle East Children’s Alliance started adding another classroom. On 13 September, Israeli soldiers issued a demolition notice. A campaigner told The Canary:

the demolition was supposed to take place at any moment especially if the construction continued… we refused to stop the construction… so, once the construction was finished, Israeli soldiers raided the school and confiscated the property belonging to it on [October] 25.

at 5 PM Israeli occupation soldiers raided the school in Khirbet Al-Maleh and confiscated a classroom… and an awning from the grounds of the Al-Maleh school. Khirbet Al-Maleh is a small Palestinian community in the northern Jordan Valley in the occupied West Bank.

STW says the remaining classrooms in Al-Maleh and four other schools in nearby Bedouin communities are all facing destruction. A campaigner named Darraghmah explained:

This school is tremendously important for the existence and the steadfastness of the residents here.

The Israeli occupation has a long and violent history of destroying schools and kindergartens serving Palestinian Bedouin communities throughout the Jordan Valley. These include the kindergarten in Khirbet Makhoul (2013), the school in Khirbet Samra (2012), and the school in Ras Al-Tin (2020).

As of 2019, the Israeli occupation had given more than 42 schools in Area C orders to be partially or totally demolished.

It believes Israel is trying to displace them to annex that region. As a result of these school demolitions, Palestinian children have to walk long distances to get to school. Campaigners claim this journey leaves them at the mercy of Israeli army and Israeli-settler violence.

On Tuesday, 24 August 2021, Israeli troops trained with heavy machinery close to homes and to the school at the entrance to the village of Tayasir in the northern Jordan Valley. pic.twitter.com/jiaFMRjmOO

"Students attending Ibziq Mixed Primary school in the northern Jordan Valley face danger and instability due to Israel's military trainings and activities in the area." pic.twitter.com/s4p1kCViEg

And that’s in addition to reported attacks from Israeli-settlers:

Today, more than 50 illegal Israeli settlers raided Khirbet Ibziq in the Jordan Valley, mainly its only [overcrowded] school serving the Palestinian community there. Intimidating students is part of the Israeli practices to deny Palestinians there the right to education. pic.twitter.com/tW7jlGgzkA

The crime of apartheid

STW says Israel’s system of oppression amounts to apartheid. In particular it cites Article II (c) of the international convention on apartheid:

the term ‘the crime of apartheid’… shall apply to the following. …

So, STW is calling on people to get involved to stop these demolitions and protect Palestinians’ right to an education. It wants people working in education to:

Featured image with permission of Stop The Wall