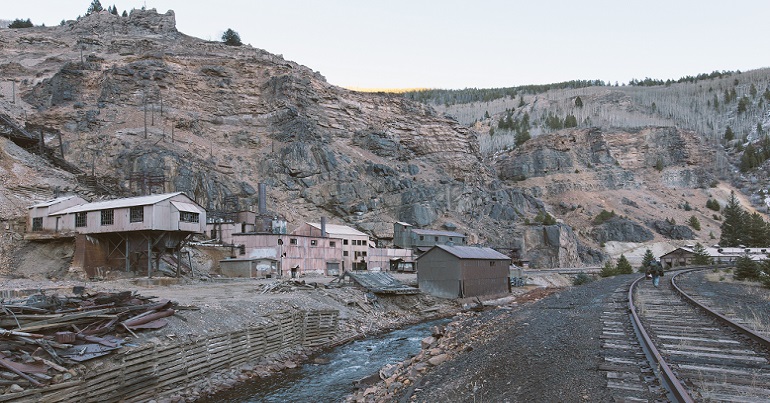 Just as the dust is settling on the underwhelming COP26 climate summit, it’s noteworthy how often the topic of greenwashing – the pretence of being environmentally friendly – raised its head in Glasgow. Campaigners who spoke to The Canary at the global day of action last weekend put the solutions greenwashing presents among the many “false solutions” being discussed in COP26.

But in fact the word “solutions” is somewhat generous. Because from conversations with people whose communities are being ravaged by mining – in particular gold and copper mining – they feel companies mining for these minerals are trampling on their rights. Yet gold and copper have been earmarked as minerals that could help the transition to a more environmentally friendly economy.

The Canary spoke to representatives of an Indigenous community in British Columbia, Canada, and community activists representing the Dominican Republic (DR) and Haiti. Their fight against gold and copper mining highlights the environmental destruction mining these minerals can bring. So, however we transition from pollutant fossil fuels to something much cleaner, the voices and rights of these communities must be at the forefront

Nuskmata from the Nuxalk Nation in British Columbia, Canada told The Canary she’s been campaigning against mining since around 2014. She got involved around the same time as the Mount Polley gold and copper mine disaster that happened on Indigenous land. A tailings pond (that stores mine waste) spilled:

That’s the equivalent of 2,000 Olympic swimming pools. Nuskmata says mining continues on Indigenous land today without consent. So she came to COP26 to make people aware that:

While at COP26, she met Indigenous people from Russia, the Philippines, Chile, Guyana, Indonesia, Fiji, Canada, and the USA among other regions. She found it was the same story all over:

We’re dealing with the systemic resource extraction, without consent of Indigenous peoples, and our lands and our health and our lives are being impacted. People around the world are being murdered and disappeared for these corporations to continue to make money and mine at all costs.

So we wanted to raise the awareness around the human rights violations that are happening, every day. 75% of the world’s mining companies are registered and headquartered in Canada. And so it’s a Canadian problem that we need to be holding the Canadian government to account for this

She said following this disaster, there were no fines nor was the mine shut down. Instead, according to Nuskmata, the mining company (Imperial Metals) got permits to stay in production. The company said it needed the permit to complete a clean up operation. But Nuskmata says it only cleaned the parts they needed to continue mining and left rest.

Contaminated slurry got into local lakes and waterways and a drinking water ban was in place for a number of weeks. According to 2013 mining records, there were:

In August 2021, the most senior engineer at that time just received a fine of C$25k (£14k) in addition to paying costs.

On 16 August this year, on the coast of British Columbia, the Nuxalk Nation served a notice of eviction on mining company Juggernaut Exploration Ltd. Nuskmata claims that immediately after the eviction notice Juggernaut’s share prices fell. She said the company is going after gold in the de-glaciated areas on coastal mountains without the Nuxalk Nation’s consent:

And so we’re still dealing with this gold rush that was the foundation of colonisation. So these mines are playing a very integral role in continued colonialsation of our lands, without our consent. So that’s what we’re pushing back on

Nuskmata adds that mining companies are also extracting copper to use in solar panels and electric cars. But she says we can’t just be “blindly allowing” mining companies to mine even more when this pollutes “local water, local air and local land ecosystems” which can’t recover. She believes mining is not at all sustainable because:

people [are] getting sick and people are being murdered around the world for the sake of a green transition. It doesn’t make sense. We can’t be sacrificing Indigenous peoples in these forests for the sake of just more electric cars without making a major systems change shift towards mores sustainable solutions.

In terms of electric cars as an alternative to fossil fueled cars, Nuskmata thinks:

it’s about shifting the awareness around what it takes to make these electric cars. And I think it’s not a matter of simply providing more electric cars but making a system shift to more public transportation, to more recycling to looking to options that don’t sacrifice people and sacrifice essential requirements like water for these things. There’s going to be nobody driving around electric vehicles on a dead planet!

So people need to be thinking about their own consumption and their own responsibility and be aware of how these materials are being sourced and who’s profiting and who has to suffer for those in rich countries to be driving electric vehicles.

But people also need to:

have these conversations with indigenous peoples… We can’t be dong that any more.

Expanding a goldmine in the Dominican Republic

The Barrick Gold Corporation (BGC) wants to expand its gold mine in Pueblo Viejo in the DR. An NGO told The Canary BGC is already mining lower to get to the gold. Heriberta Fernández and Dario Solano work with Centro Montalvo in the DR as well as Haiti. Their organisation works with communities opposed to BGC’s mine expansion.

She claimed BGC wants to expand in an area where there are rivers that supply water to 3 million DR citizens. Both Fernández and Solano believe, as things stand, BGC’s impact on the environment has contaminated the water and led to fish kills. So the communities have had to rely on bottled water that BGC initially supplied once a week. An NGO told The Canary that the government then began supplying this water as it looked bad for BGC to be doing it.

Fernández and Solano said the living environment became so uninhabitable that families agreed to move out. However, the promises of new accommodation haven’t yet materialised. They believe the “current model”, which sees corporations cosy up to government, is a threat to their ecosystem because BGC is taking advantage of it. Moreover, they feel one of the major threats is to their “food sovereignty”. They said:

Where mining happens the quality of life decreases

However, they believe the local community stands united. They claim the divide and conquer strategy the company used has failed. That’s because there’s a:

collective consciousness to oppose these mega mining industries even if the government is supportive.

So, in the absence of “evidence of responsible mining”, they believe gold should stay in the ground.

Further potential risk to the community

The Canary spoke with Jan Morril of NGO Earthworks and a representative of NGO MiningWatch Canada. They’ve worked in the field in the DR and believe there’s broad opposition to the mine. This was clearly on display when thousands marched in an anti-mine protest on 19 September in Santo Domingo.

The NGOs explained that the current tailings pond (mine waste water storage) is 114 metres high and stores 52 million cubic metres of waste:

That’s 28 metres higher than the tailings dam that collapsed in Brazil in 2019 and killed almost 300 people. So, it is posing potentially a very big threat if it were to become unstable. Barrick’s own documents they classify it as an ‘extreme hazard classification’. If it were to collapse it could kill over 100 people cause major environmental destruction and have major economic consequences… So now they’ve run out of space for that dam and they need to build a second one which has become the focal point of community opposition. The community has been very very clear, they don’t want a new tailings dam.

They believe it’s extremely risky as tailings dams are particularly susceptible to flooding and earthquakes. And the DR is in a highly seismic area and an area of heavy rainfall. Additionally, the area they’ve identified for the tailings pond is rich for watersheds and important for cacao farming. So if there’s a collapse or even leakage from the pond it compromises water resources and farmer livelihoods.

In the race to save the planet, it’s understandable people would try to find quick solutions. But we’ve got ourselves into an unbelievable mess that capitalism and the desire to consume more has played no small part in. That same system and desire most certainly won’t get us out of this mess.

And not only is further exploitation of the Global South and Indigenous communities morally corrupt and a continuation of the evils of colonialism, it’s literally digging us into a bigger hole, and possibly an earlier grave. Transitioning away from dirty fossil fuels is clearly a priority. But in whatever steps we take in that transition, these community voices must be front and centre.