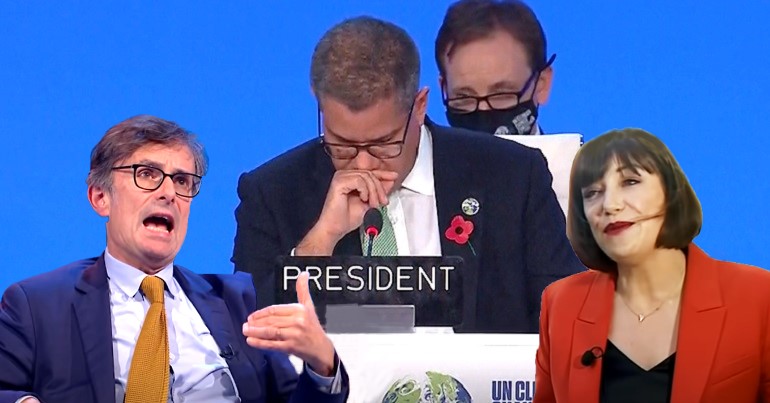 The corporate journalist press pack fell dutifully into line with the Tory government over the outcome of COP26. But their pushing of government propaganda should be seen for what it is: the wilful whitewashing of a disastrous summit and the rich’s destruction of our planet.

COP26: what a shitshow

The COP26 climate change conference ended on Saturday 13 November. It was led by Tory MP Alok Sharma, and the conference was nothing short of a shitshow. As The Canary previously reported, it was attended by fossil fuel lobbyists. And COP26’s own carbon footprint was expected to be twice as much as previous summits. As for its action on the climate crisis, as Greta Thunberg said:

Moreover, as The Canary‘s Tracy Keeling wrote, Net Zero is a nonsense anyway:

Net Zero is a plan to keep on polluting, at least up until 2050. …instead of ending pollution, Net Zero ‘climate action’ generally focuses on ploughing money into finding “fairy tale compensatory mechanisms” to miraculously cancel it out.

All things considered, COP26 was a waste of time, money, and carbon emissions. So, enter the corporate press pack to churn out propaganda on behalf of the Tory government.

Spinning for the Tories

A big moment. The cover declaration, that in theory keeps 1.5 alive, and much of Article 6 of the Paris Agreement is also approved. We are almost there. Amazing. #COP26

Many people rightly called out his bullshit. In short, it looks like he was spinning for the Tories and Western governments more broadly. As one Twitter user said:

Amazing? You sure? I know our media is mostly shit, but this is shitter than shit. It’s a total cop out, with greedy rich nations shitting from a great height because they don’t care about those for whom this is a desperate emergency right fucking now. #COP26 https://t.co/zKAZdd3J6N

The corporate press pack also seemed intent on raising up Sharma as some sort of climate saviour – not least after he made out he was crying at the end of the conference. Sky News‘s political editor Beth Rigby pushed that Sharma was ‘holding back tears’:

COP President Alok Sharma holds back tears as he speaks of his deep sorrow after a key last-minute changes to the Glasgow deal around phasing out coal. ‘Phase out’ of coal resolution weakened to ‘phase down’ after a proposed revision by India https://t.co/2tlAqjVsQz

Matt Hancock forgot the golden rule of pretending to cry on national television, which is to produce at least one discernible tear pic.twitter.com/NQZSNj9M2H

The point being that Sharma and Hancock’s feigned emotion, coupled with the corporate media buying into it, gives the impression that these monsters do actually care about anyone besides themselves and their mates. This is demonstrably false. Hancock presided over a government pandemic response which failed to protect society’s most vulnerable people. Sharma was a Department for Work and Pensions (DWP) minister. On his watch, people were dying either waiting for, or after being denied, social security by the DWP; people like Steven Smith:

12. Stephen Smith was declared 'fit for work' by the DWP despite being terminally ill and weighing 5 stone. He died while appealing his stopped benefits from his hospital bed. The DWP apologised to his family. pic.twitter.com/jXhaYs83B4

As we’ve seen repeatedly over the years, the corporate press pack are acting as “client journalists”. Peter Oborne described them as:

A client journalist is a journalist who sees his job as decorating power, or legitimising power, and talking the language of power rather than challenging power, [and] running stories which make power accountable

We saw it throughout the pandemic. A similar thing happened in the run up to the 2019 general election. And now, client journalists are propping up the government – as it presides over rich people’s destruction of our planet.

Corporate journalists are pushing the line that the UK government did all it could during COP26 (to the point of breaking down in tears) – and that if it fails, its the fault of our perceived enemies like China and developing nations like India.

The reality, of course, is that Western countries are more responsible than the rest of the world for the position we’re in. By protecting the UK government’s credibility (when it has none) and interests (keeping wealthy, Western people rich), corporate journalists must share some responsibility for the catastrophe our planet is facing.