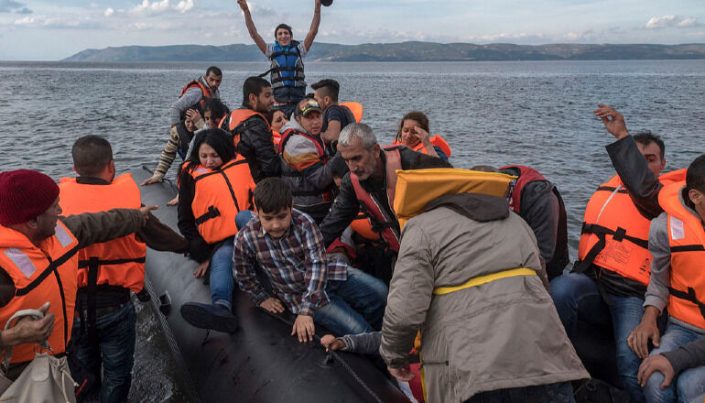 On 18 November, 24 human rights activists are on trial for saving refugees’ lives at sea. They were arrested on the Greek island of Lesbos in 2018, held in pre-trial detention for 100 days, then released on bail. Now, almost three years later, the Greek state will finally begin its prosecution.

Among those in the dock are Sarah Mardini, Nassos Karakitsos, and Irish man Seán Binder. They volunteered for the now defunct Emergency Response Centre International, and they’re accused by the Greek authorities of people smuggling, being part of a criminal organisation, money laundering, and espionage. Mardini herself reached the shores of Lesbos by dinghy after fleeing Syria in 2015. She made headlines at the time, when she and her sister – both competitive swimmers – saved the lives of the others in their dinghy after the engine broke down.

The trial, although shocking, is perhaps unsurprising as European states continue to crack down on those who help refugees. Free Humanitarians, which advocates for criminalised human rights defenders, states that:

In 2019, 171 individuals across 13 European states faced criminalisation and between 2020 and 2021 at least 44 people in Greece faced similar accusations like those against Sarah, Seán and Nassos. Criminalisation coincides with the securitisation of borders and worrying instances of pushbacks and collective expulsion, especially at sea.

A ‘pushback’ is when state authorities literally push back refugees from their border, both at land and sea, after people have successfully crossed. Pushbacks can violate international law.

Free Humanitarians went on to argue:

The humanitarian assistance of people like Seán, Sarah and Nassos has been essential as at least 1,675 people have lost their lives or gone missing on the East Mediterranean sea since 2015. Since their release from pre-trial detention, they have campaigned tirelessly against the criminalisation of solidarity and for refugee rights. If found guilty, their case could set a worrying precedent with adverse implications for humanitarian assistance far beyond Greece.

The prosecution of the activists comes at a time when so-called ‘democracies’ are becoming more and more right-wing and fascistic, making hostile immigration policies, or attempting to criminalise those who dare to help our fellow human beings. Instead of spending money on saving refugees, the EU continues to strengthen fortress Europe, paying agencies like Frontex to prevent people from arriving, essentially leaving them to drown.

Sea Watch, which actively rescues people from sea, argues that:

By 2027, the EU is letting Frontex’s work cost 5.6 billion euros without spending a single euro on saving human lives.

The EU actively prevents legal and safe entry routes by strengthening the border police and outsourcing further border controls through cooperation with third countries. It thus de facto not only abolishes the fundamental right to asylum but bears direct responsibility for thousands of deaths at its borders.

At the same time, some European countries refuse to face the fact that the refugee crisis is largely due to their policies, as they have actively participated in invasions of Afghanistan and Iraq, provided weapons to destroy lives in Syria, and meddled in politics around the world.

Support the activists on trial. There are a number of events taking place in Europe in support of those facing prison, including a demonstration at the Greek Embassy in London on 17 November.