Now COP26 is over, it's time to listen to real climate solutions - Canary Workers’ Co-op 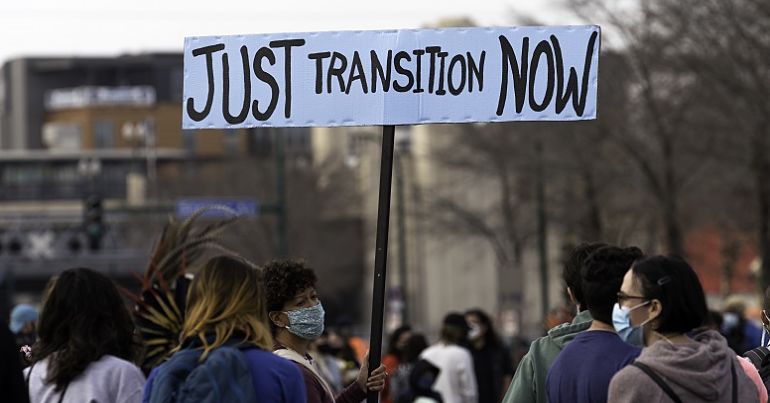 COP26 is over. The world leaders at the UN climate summit didn’t come anywhere near agreeing what is needed for the sake of our planet and were too busy throwing the fossil fuel industry a lifeline,

It’s therefore time for community-based organisations to take centre stage. And at an event at the COP26 Coalition Summit on 8 November, community groups discussed how they might save the planet.

Jose Bravo from the Just Transition Alliance (JTA) spoke at that event. He explained to The Canary that the JTA is:

an alliance between labour and environmental justice organisations in the United States, Canada and Mexico

Building a solidarity economy in Jackson, Mississippi, anchored by a network of cooperatives and worker-owned, democratically self-managed enterprises.

These organisations, and others like them, are providing real potential solutions to the climate crisis and show what we can do when we focus on people and planet and not corporations and profit.

The writing is on the wall

made everything from a pellet to a nuclear weapon and 90,000 types of chemicals. So there were things that they produced as workers that literally don’t belong on the face of the planet.

According to Bravo, Mazzocchi could see “the writing on the wall” in terms of workers’ jobs in the fossil fuel industry. Mazzocchi believed those jobs were no longer sustainable. So, as workers, they needed to have a conversation about:

switching over production to safer more sustainable jobs in a way that’s just for workers and for the environment.

From there the JTA was born, and Bravo later got involved. He believes that creating “good paying union jobs” in the community is key.

Bravo said there are already JTA projects in inner cities and tribal communities where people manufacture solar panels for their community. Additionally, farm co-ops have been established where workers now have an investment in that farm and can access good food.

The JTA also partners with other organisations. One such organisation is the Indigenous Environmental Network (IEN). This is a coming together of Indigenous Peoples that empowers them to work towards sustainable livelihoods and environmental protection. The IEN hosts conversations on Indigenous feminism, produces Indigenous media, and offers grants to communities affected by mining.

Another partnership is with the Farmworker Network for Economic and Environmental Justice which:

serves nine agricultural worker membership organizations from the US, the Caribbean and Mexico.

One of the other organisations represented at the COP26 Coalition Summit event, Cooperation Jackson, says its:

basic theory of change is centered on the position that organizing and empowering the structurally under and unemployed sectors of the working class, particularly from Black and Latino communities, to build worker organized and owned cooperatives will be a catalyst for the democratization of our economy and society overall.

And its mission is to:

advance the development of economic democracy in Jackson, Mississippi by building a solidarity economy anchored by a network of cooperatives and other types of worker-owned and democratically self-managed enterprises.

Cooperation Jackson runs a number of successful initiatives from its base at the Kuwasi Balagoon Center. From this centre it wants to develop:

‘new and sustainable’ forms of economic activity and social living that will lead a just transition from the extractive and exploitative economy, Cooperation Jackson is committed to creating a Center that is “green” as a model for Jackson, MS.

One such initiative is the Sustainable Communities Initiative. This initiative’s aim is to:

help stabilize rents, provide affordable “green” housing, create quality living wage jobs, and lay a foundation for the sustainable transformation of Jackson’s economy through cooperative enterprise and solidarity economics. We know this is related to and will serve the practice building towards self-governance models, community control and self-determination.

To achieve this it bought vacant premises in their neighbourhood as a “Community Land Trust”. This model enables it to look after the land, keep it in the hands of the community, and to provide affordable housing in harmony with the environment.

Additionally, an initiative known as the Community Production Initiative aims to turn Jackson:

into an innovative hub of sustainable manufacturing and fabrication that will help build and expand ‘community wealth’ in the city.

The centre will work as a training centre and:

a multi-stakeholder cooperative, a coding and digital programming innovation hub, a maker space and the city’s first hub of community production.

The solutions are right in front of us

These examples alone show us what’s possible when people work together. And it’s even more remarkable when organisations like these operate on a voluntary basis supported by donations. Contrast that with costs predicted for COP26, and it makes you wonder about society’s priorities.

The resources are clearly there to make a transition away from fossil fuels that serves both people and planet. And while at the government level there appears to be a lack of will, some communities are more than ready to do what’s needed.