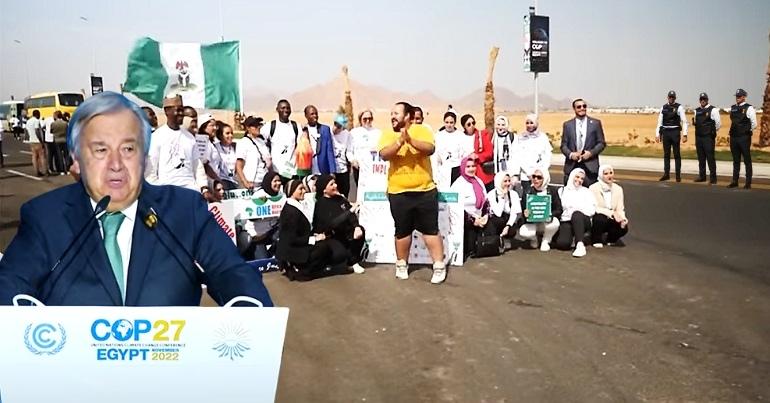 At the COP27 climate summit, the UN boss has called for “climate solidarity” as the world faces a global disaster. However, at the same time, the authoritarian Egyptian state is cracking down on protesters at the conference.

As AFP reported, on Monday 7 November UN chief Antonio Guterres gave a stark warning to world leaders at COP27. He said that humanity is in “the fight of our lives” as climate change intensifies droughts, floods, and heatwaves. Guterres also said the international community faces a stark choice. He told leaders at the COP27 summit in the Egyptian resort of Sharm el-Sheikh:

Cooperate or perish. It is either a Climate Solidarity Pact, or a Collective Suicide Pact.

We are on a highway to climate hell with our foot still on the accelerator.

Guterres called for a “historic” deal between rich countries and emerging economies that would aim to reduce emissions and keep the temperature rise to the more ambitious Paris Agreement target of 1.5 degrees Celsius above the pre-industrial era.

He said the target should be to provide renewable and affordable energy for all, calling on the top emitters in particular, the United States and China, to step up their efforts.

A ‘war on nature’

Guterres summed up by saying the climate fight:

will be won or lost in this crucial decade on our watch.

However, for all Guterres’s talk of solidarity, the Egyptian government isn’t letting ordinary people show it – because it is heavily cracking down on protests at COP27.

No COP27 protest unless it’s standing around doing nothing

have banned activists at the UN’s COP27 Climate Summit from mocking the heads of state and government officials taking part. Anyone violating the banned list will be punished, they warned. The details were provided on the website of the Egyptian presidency of the summit

The website states a load of rules around COP27 protests. These include that people cannot use:

the flow of movement of individuals or vehicles.

They have also said that people cannot do anything:

derisory to the UN, any of their Member States, organizations or any individual or criticism that would go against basic rules of decorum

So, it’s unclear what kind of protest Egyptian authorities will let you do – apart from standing around quietly.  As Middle East Monitor noted, this is hardly unsurprising from the authoritarian Egyptian government, though. As it wrote:

Human rights organisations have criticised the deterioration of human rights in Egypt, with prisons “filled with tens of thousands of prisoners of conscience and defenders of human and environmental rights” held in extremely harsh conditions.

Little wonder, then, that climate rebel Greta Thunberg refused to attend COP27. So, for all Guterres’s talk of climate solidarity, clearly this can only be on the Egyptian government’s terms. This is not climate action. As Thunberg said, this is “greenwashing” – and it’s ignoring Egyptian human rights abuses in the process.