The Irish parliament delivers a blow to privatising welfare - Canary 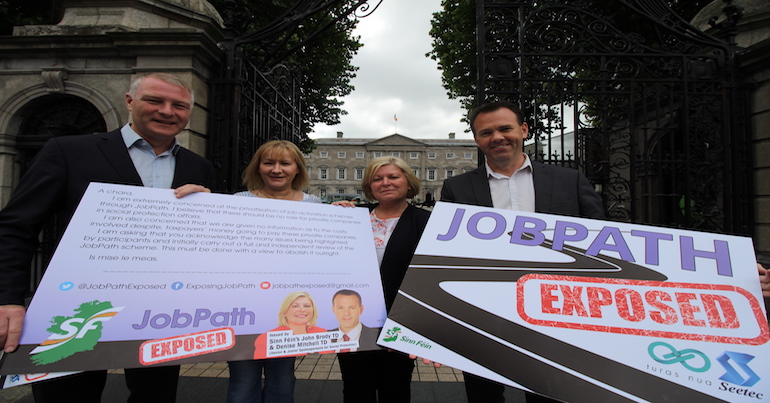 A motion has passed in the Irish parliament that calls on the government to end JobPath. John Brady, Sinn Féin spokesperson for employment affairs and social protection, tabled the motion. Brady said JobPath “has cost the taxpayer millions and it has caused untold damage to existing community based schemes”.

Fine Gael and the Labour Party founded JobPath when in government in 2015. Their intention was to get people who were long-term unemployed back into work. They then outsourced the scheme to two private companies: Seetec and Turas Nua.

In the debate about the motion, Brady revealed that both companies have received €149 million since 2015. Seetec and Turas receive income – up to €3,718 for every person that ends up in employment for a year or more through its services.

“We did not encounter any positive experience”

In 2015, Clare Daly of Independents 4 Change pointed out that Seetec was at the time under investigation in the UK. Daly stated that in the UK “persons were harshly sanctioned resulting in suicide and human rights violations”. Other criticisms of JobPath since it came into being are similar.

A research group based at the Waterford Institute of Technology (WIT) recently gave evidence to a government committee about its investigations into the scheme. Doctors Ray Griffin and Tom Boland interviewed 121 people about their experiences with Seetec and Turas Nua. They pointed out:

In our interview data, we did not encounter any positive experience that we could report to the committee today.

They described JobPath as “a system that actively and capriciously patronises, cajoles, threatens, manipulates and, at times, bullies”. Seetec and Turas Nua can apply sanctions on those who do not follow the rules set by the two companies. This can include a reduction or freezing of a person’s welfare payment. The researchers highlighted the case of one woman  JobPath sanctioned. As a result, she “ended up relying on a food bank and on high-interest debt.”

Boland and Griffin also pointed to a case of a pregnant woman whom JobPath forced to accept employment in a call centre. JobPath told her “to accept work at a call centre in a location some distance away which she had absolutely no means of getting to”.

In another case, an architect had her search for jobs “micromanaged”. Boland and Griffin said:

She was directed to reduce her expectations and accept other types of work.

The Canary has previously reported on the use of sanctions against unemployed people in the UK.

Brady has now called on the minister for employment affairs and social protection Regina Doherty “to act upon this motion immediately and scrap the Jobpath scheme”. He also demanded that the government invest in employment schemes that work.

The Irish Times has previously reported that only 18% of people who go through JobPath end up in full-time employment.