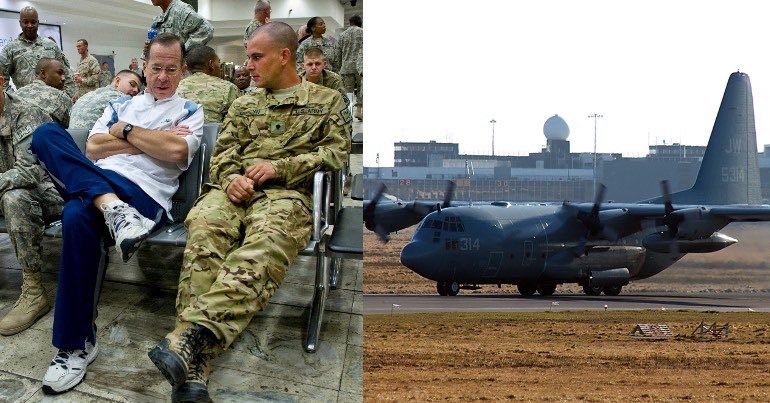 On 17 March, Irish police arrested two US military veterans at Shannon Airport in Ireland. The two men, Ken Mayers and Tarak Kauff, along with five others, came to Ireland to protest the US military’s use of the airport.

The US has used Shannon since at least the 1950s for refuelling and as a stopover for its aircraft. This continued usage has been an issue for many years. In 2014, for example, Margaretta D’Arcy tried to block a runway at Shannon in protest and a judge sent her to prison for three months. At the time, she was 79 years old.

Mayers and Kauff are both members of Veterans for Peace (VFP) and were previously in the US military. VFP said the police arrested the men because they had “entered Shannon air field for the purpose of inspecting and investigating” an aircraft used by the US military. It said:

The two walked across the air field with the intent of inspecting the plane for weapons or munitions, but were apprehended by airport security and Gardai [police]. [They] were detained and interviewed at Shannon Garda [police] station and held overnight for arraignment on charges of trespass and criminal damage.

The judge denied them bail and remanded them to Limerick Prison.

The men initially offered to stay in Ireland until their trial takes place. Their trial might not take place for another two years, though. And their solicitor pointed out that both men needed to return home to the US. Instead, the men offered to “sign a sworn undertaking to return for trial”. But:

the prosecution opposed this and continued to oppose the granting of any bail.

Their solicitor has said he will be making an appeal to the High Court against the denial of bail. Ed Horgan of Irish Veterans for Peace said denying the two men bail:

is a clear attempt to punish the two [VFP] activists before any trial takes place.

Even though Ireland is a neutral country, the US military has used Shannon Airport as a stopover for many years. This has included the CIA also using Shannon as a stopover for its rendition flights. In 2013, the Open Society Foundation published a report about these flights. It identified Ireland as one of 54 countries that cooperated with the CIA in some way. It also pointed out that, in 2010, Ireland’s then-minister for foreign affairs was “convinced” that the CIA had used Shannon as a refuelling point for a number flights “involving renditions”.

The CIA has also used British airports as stopovers for rendition flights.

55% of Irish people have said they do not want the US military to use Shannon, according to a 2016 poll. And 60% said they wanted Irish neutrality included in the constitution.