'Egg Boy' shows, yet again, what a true hero he is - The Canary 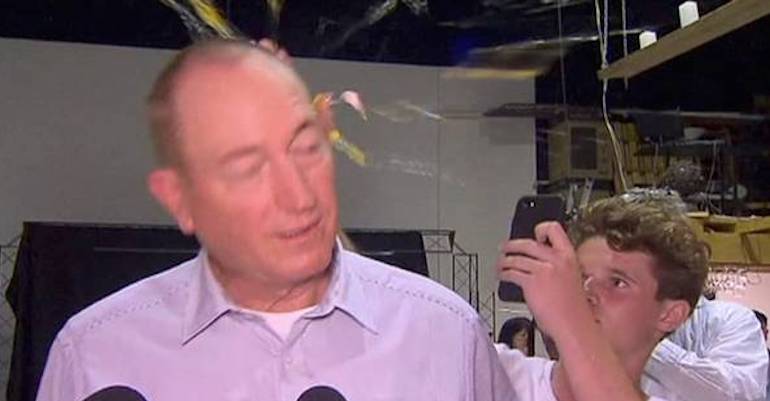 On 16 March, a 17-year-old boy egged far-right Australian politician Fraser Anning. Now, the so-called ‘Egg Boy’ has again shown the world what a hero he is.

Will Connolly took the internet by storm and earned the nickname ‘Egg Boy‘ for taking a stand against Anning’s racist comments. Following the recent Christchurch atrocity, Anning issued a vicious and racist attack, blaming Muslim people for the murder of at least 50 people in two New Zealand mosques. A white, far-right terrorist has since been charged with murder.

So when Connolly egged Anning, many people around the world celebrated:

And now, Connolly has asked for money raised in a crowdfunder for legal costs to go directly “to the victims of the Christchurch terrorist attack”.

After being egged, Anning punched Connolly in the face, twice. Then, about five or six of Anning’s far-right supporters pinned him down in a choke hold.

“Terrorism has no religion”

It’s been clear from the start that Connolly is a principled and intelligent young man:

#eggboy thanks for standing up when the world is showing double standards. pic.twitter.com/w8FpBtFo1G

And now, there’s even more reason to love him. The crowdfunder raised over $62,000 in just three days. And although it was originally set up to cover legal costs and buy “more eggs”, Connolly wants the majority of the money to go to the families of the atrocity.

‘Egg Boy’ has become a symbol of hope in the face of a racist atrocity:

He is a terrorist, he is a criminal, he is an extremist. But he will, when I speak, be nameless.

As the world respects and mourns those killed, Ardern and Connolly truly have shown that ‘not all heroes wear capes’.