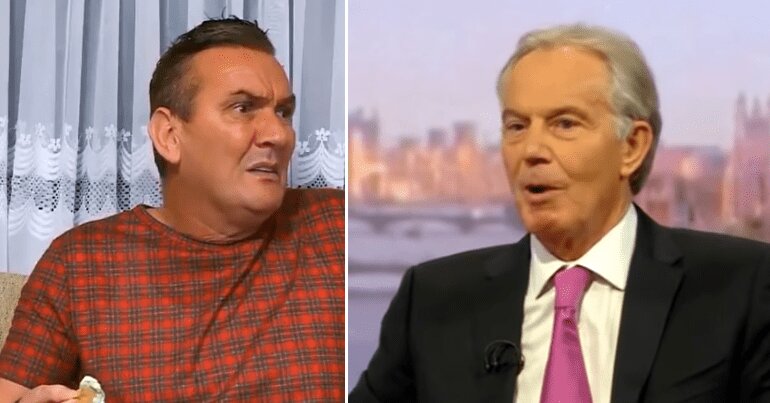 In the show Gogglebox, people recently gave frank opinions on an appearance by Tony Blair on the Andrew Marr Show. Marr was interviewing Blair about the Labour and Conservative MPs who splintered from their parties to join a new ‘centrist’ parliamentary faction.

If you’re fed up with the Westminster bubble simpering over Blair, the comments from Gogglebox participants will restore your faith in humanity:

My faith in the people of Britain has been restored. Thank you GoggleBox. pic.twitter.com/MnKioJMNNm

The opinions aired on Gogglebox chime with Blair’s 72% disapproval ratings. Taken together, they suggest that Labour’s fundamental shift away from Blairism under Jeremy Corbyn is key to its newfound success. The party increased its voteshare by more than at any point since 1945 in the 2017 election.

On Gogglebox – where we watch others watching TV, one participant put the notion of returning to Blair’s era to bed:

Back to what? This is why… we’re in the shit like we are.

Responding to Blair talking about himself, another epitomised how most people are done with personality politics. She ridiculed the former prime minister, singing:

The Iraq war seems to overshadow Blair’s investment in education and healthcare. And rightly so. Approximately one million Iraqi people died because of Blair and George W Bush’s neo-colonial invasion in order to privatise the country’s oil reserves. The war also provided fertile ground for the rise of extremist groups such as Daesh (Isis/Isil). It was based on Tony Blair’s “dodgy dossier” – a fabrication paraded across the corporate media that has allegedly made the former prime minister a fortune.

The Gogglebox clip is further evidence that Labour should continue to distance itself from Blair. It certainly helps that Corbyn – a man who opposed the Iraq war and Blair’s capitulation to Thatcherism – is the Labour leader. The only people who still treat Blair as a serious voice, meanwhile, are political and media elites.