It looks like that was Theresa May’s last PMQs. France just rang the death knell for the prime minister. - Canary 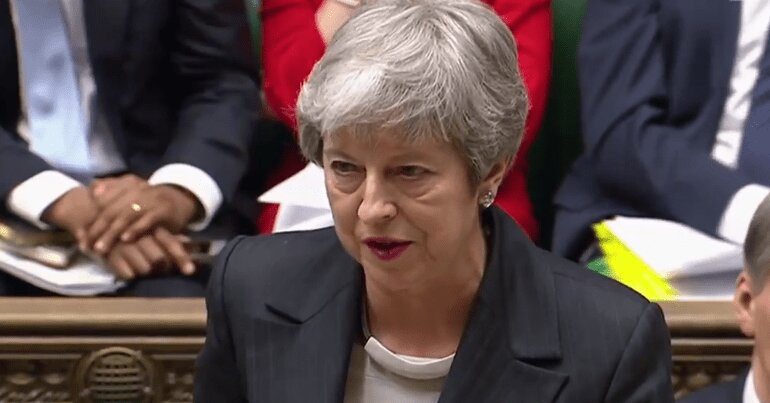 During Prime Minister’s Questions (PMQs) on 20 March, the opposition benches repeatedly called for Theresa May to resign. And after an announcement from France, that looks increasingly likely.

May has requested an extension to the Brexit process until 30 June from the EU. But France has said that it will oppose any extension that merely kicks the can down the road, which seems to be May’s current position:

For Macron, it is decided: we must … refuse to allow the British to postpone the Brexit, scheduled for 29 March. In any case, this is the position he will express on Thursday at the European council.

PMQs demonstrated that May has no significant changes to make to her withdrawal agreement. Indeed, the PM made no hint of changing her position in her letter to president of the European council Donald Tusk requesting an extension.

In the Commons, there was uproar when May tried to blame parliament for the Brexit mess:

The outcome of the long extension would be endless hours and days of this house… carrying on contemplating its navel on Europe and failing to address the issues that matter to our constituents… This house has indulged itself on Europe for too long.

To which Jeremy Corbyn said:

To describe the parliamentary process as one of indulgence doesn’t show much respect for the democratic process that sends us here in the first place. The house… has twice rejected the prime minister’s deal, she’s trying to come back for another attempt on Monday. Further to your [the speaker’s] ruling last Monday, she’s got to come up with something a bit different… What significant changes will there be… that will even allow the prime minister to table it on Monday?

In response, May had no changes to offer:

The 27 EU states would also need to agree unanimously to any extension to the Brexit negotiation process. And France has already echoed Tusk’s assertion that there must be a proper reason for any delay. A spokesperson for Tusk said:

But May just seems to be trying to extend the Brexit process in order to run down the clock even further. And the country, the EU and the opposition parties have had quite enough.

Parliament has already rejected her Brexit deal in the first and fourth greatest governmental defeats in history. May should resign immediately.