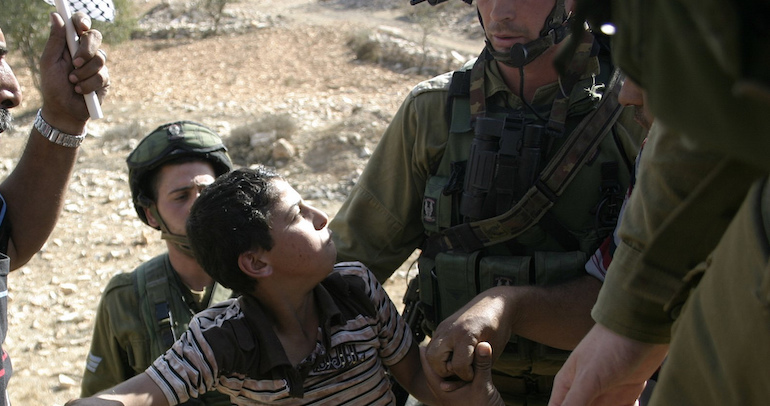 One of Israel’s leading newspapers has condemned the abuse of hundreds of Palestinian children by the Israeli military (IDF).

“Abused and manipulated” on an “endless trip to hell”

On 16 March, Haaretz reported that Israel sends Palestinian children, mostly boys, on an “endless trip to hell”. These children are:

seized in the dead of night, blindfolded and cuffed, abused and manipulated to confess to crimes they didn’t commit. Every year Israel arrests almost 1,000 Palestinian youngsters, some of them not yet 13.

According to the report: “At any given moment, there are about 270 Palestinian teens in Israeli prisons”. The IDF arrests “about half” of these children in their homes. Soldiers usually “burst into the house in the middle of the night”.

The Haaretz report gathered testimonies from many of these children.

“The most frightening places”

Soldiers handcuff children, even those whose “hands are too small”, and blindfold them. As one lawyer who represents Palestinian children said:

When your eyes are covered, your imagination takes you to the most frightening places.

Once taken away, these children “are completely cut off” because they don’t speak Hebrew. Soldiers move handcuffed and blindfolded children “from place to place” before interrogation. They leave children outside in “discomfort and the bewilderment”, often without food or water. And as the testimonies revealed:

In the meantime many acts of violence, in which soldiers beat the detainees, take place and go undocumented.

Lawyer Farah Bayadsi called this the “endless trip to hell”. She also noted that the experience stays with these children long after the arrest to create “an ongoing feeling of a lack of security”.

Eventually, soldiers interrogate children. By this time, most are “tired and hungry”. They might be “in pain” from violence; most are “frightened”; and few understand why they are even there. Without an instant confession, soldiers issue “a barrage of questions and threats”.

The testimonies revealed a common pattern to interrogations.

Soldiers threaten children directly, warning “You’ll spend your whole life in jail”. They also threaten the child’s family: “I’ll bring your mother here and kill her before your eyes”. Or they may make other threats: “If you don’t confess, we’ll take away your father’s permit to work in Israel – because of you, he’ll be out of work and the whole family will go hungry”.

Many children sign confessions written in Hebrew (rather than Arabic), which they don’t understand. Most have no contact with parents until they reach court. Israel arrests more boys than girls, but there’s no separate jail system for the girls. So it locks girls up with adults.

According to Bayadsi, this “system shows that the intention… is more to demonstrate control than to engage in enforcement”.

As Haaretz reported, in 2012 “British legal experts concluded” that the treatment of Palestinian children amounts “to torture”.

In 2013, meanwhile, UNICEF investigated the treatment of Palestinian children in the Israeli detention system. Its report condemned the “cruel, inhuman and degrading treatment or punishment… of Palestinian children”. It concluded that mistreatment “appears to be widespread, systematic and institutionalized”. Israel also tries children in the world’s “first and only juvenile military court”. But this “uses the same facilities and court staff as the adult military court”. The UN said children need “distinct, child-centred staff, personnel, policies and practices”.

UNICEF recorded a “pattern of ill-treatment” that mirrors the Haaretz testimonies, including:

arrests of children at their homes between midnight and 5:00 am by heavily armed soldiers; the practice of blindfolding children and tying their hands with plastic ties; physical and verbal abuse during transfer to an interrogation site, including the use of painful restraints; lack of access to water, food, toilet facilities and medical care; interrogation using physical violence and threats; coerced confessions; and lack of access to lawyers or family members during interrogation.

As UNICEF stated, these practices violate “international law” to protect children. Yet as the Haaretz report shows, Israel failed to implement the UNICEF recommendations.

In October 2018, the Parliamentary Assembly of the Council of Europe insisted “all forms of physical or psychological abuse” of Palestinian children must end.

This abuse continues as Israel also continues to shoot and murder innocent children.

When even an Israeli newspaper shares news about further abuse of children, that says everything. We must insist that this inhumane torture ends.