Amid Assange's ongoing censorship, all leftists must learn from Ecuador's hostile takeover - Canary 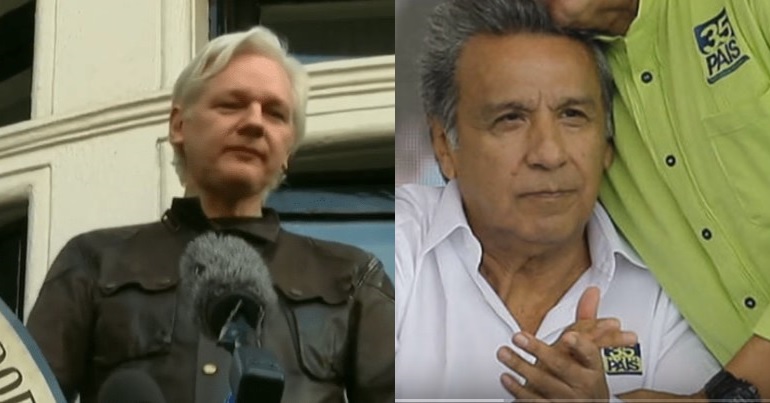 As Ecuador continues to censor WikiLeaks founder Julian Assange, a documentary has taken a close look at the government behind the censorship. And it explores the lessons all left-wingers must learn from the drastic about-turn in Ecuador.

Chilean journalist Patricio Mery Bell made the documentary La Traición Cuántica (‘The Quantum Betrayal’). It sets out to convey the cynicism of current Ecuadorian president Lenín Moreno. Politicians who break campaign promises may be very common, but Moreno’s case really is stunning.

Imagine Jeremy Corbyn, the day after he takes office in the UK, announcing that the Conservative Party manifesto is what he had really supported all his life. That would approximate what Moreno pulled off in Ecuador.

Moreno ran for president in 2017 with the backing of Rafael Correa, Ecuador’s former leftist president who had been in office for ten years (2007-2017). Moreno had been Correa’s vice president for the first six years of his government, and a UN envoy for the remaining four. For ten years, Moreno had also been vice president of Alianza País, the political party Correa founded.

Who could have anticipated his betrayal?

To say Moreno ran as a Correa loyalist in 2017 would be an understatement. During the campaign, he called Correa’s administration “legendary” and Correa personally “the best president Ecuador ever had”. He also led cheers of “Rafael! Rafael!” during the 2017 campaign.

But within three months of taking office, it was obvious that Moreno had been an impostor. He quickly devoted himself to stuffing the pockets and restoring the political dominance of the elites who hated Correa. Moreno has just signed a deal with the International Monetary Fund (IMF) which will further entrench his elite-friendly policies.

To do all this, Moreno had to turn fiercely against the man he had lavishly praised for ten years. He quickly ensured that both public and private media depicted Correa’s government as corrupt and authoritarian. (The private media, of course, just had to keep doing what it had always done.) Moreno ensured media uniformity by removing “Correa loyalists in state-owned media outlets”, as a writer for the right-wing Atlantic Council described.

Moreno and his right-wing allies have also jailed former vice-president Jorge Glas based on a very flimsy case, in proceedings that made a mockery of due process. Correa, meanwhile, has been similarly pursued in a ridiculous manner. Journalists seen as “Correaist” have been imprisoned on trumped-up charges.

If Julian Assange were not a hate figure in the Western media, the fact that Moreno has brutally punished Assange for political speech would have produced howls of outrage. Correa and his allies have also been blocked from registering a new political party. Only through an informal alliance with another party are Correa’s allies participating at all in upcoming local elections (in only about 30% of Ecuador’s 221 municipalities).

Patricio Mery Bell’s documentary draws parallels between Moreno and Osvaldo Romo, who infiltrated Chile’s left and then helped the Pinochet dictatorship round up and torture people after the 1973 coup.

The lesson of the documentary? When leftist movements are too preoccupied with weeding out opportunists, they can make themselves ineffective. But they should avoid complacency regarding potential traitors.