Jewish people in Germany are being smeared as antisemites... by people who aren't Jewish - Canary Workers’ Co-op 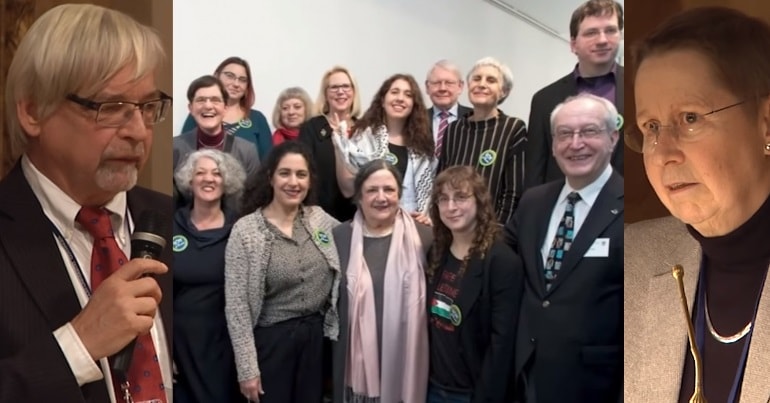 Non-Jewish German people have been smearing Jewish people (from both Germany and Israel) as antisemites. Why? Because of their activism for Palestinian human rights.

The Canary spoke to Shir Hever, an Israeli political economist who lives in Germany and is a board member of Jewish Voice.

Hever, who recently authored The Privatisation of Israeli Security, told The Canary:

The accusations [of antisemitism] are also used against attempts to commemorate the Nakba [ethnic cleansing of Palestine], against participating in the Freedom Flotilla to Gaza, against anyone supporting one democratic state [for Palestinians and Israelis], the Right of Return of Palestinian refugees or referring to [Israeli] apartheid.

The bizarre logic of a German mayor

Hever explained how the mayor of Göttingen had said:

I’m not going to allow the Jewish Voice for Peace to receive any prize in any state-owned building… [stressing] ‘Oh, you know that my father was in the SS. And that’s why I have to boycott you.’

[The mayor is] a Social Democrat, but very conservative and religious. And for him, the State of Israel is a holy thing. He doesn’t like it when Jews consider the State of Israel as belonging to them (for example, Israeli citizens criticising their government) because he feels it belongs to him.

Josef Schuster, of the Central Council of Jews in Germany, also participated in the smears. Hever explained that the council:

struck a deal with the German government to stand as the representative organisation for German Jews, although most German Jews are neither members nor particularly supportive [of the council].

Josef Schuster has… said that antisemitism [was] imported into Germany in 2015 by refugees from Syria… a very Islamophobic statement. But in addition to that, it’s also a statement that denies the antisemitism that existed in Germany in the last decades. He just glosses over the murders of Jews by neo-Nazis and that kind of underground culture.

[The far-right party] Alternative for Germany is quoting from Josef Schuster and taking his position and saying, ‘well, we’re not antisemites because even a Jewish person made those statements’; and ‘we just hate Muslims, but we don’t hate Jews’. But of course, this is a very Christian party, and Jews will come next after this party manages to get rid of the Muslims.

There is now a situation in Germany in which speaking out for equal rights of people is considered an antisemitic act. And the Holocaust has been manipulated and instrumentalised by right-wing groups – even right-wing Jewish groups, pro-Israeli Jewish groups – in order to protect the State of Israel and the interest of the Israeli government, at the expense of the memory of the victims of the Holocaust.

Anyone familiar with the smearing of the anti-racist left in the UK, or in the US, will see clear parallels.

“Never again for anyone”

the only way to protect the memory of the victims of the Holocaust, and more important than that, to protect people who live today from persecution and from racism, is to make a universal statement; that it’s not just that we have to say never again for the Jews, but never again for anyone.

UPDATE: This article was amended on 20 March 2019 at 15:26 GMT to reflect the fact that Jewish Voice, part of the coalition that makes up European Jews for a Just Peace Germany, won the award; and a quote that was misattributed to Joseph Shuster has been removed.

Disclaimer: the author of this article and Shir Hever were colleagues at The Real News Network.