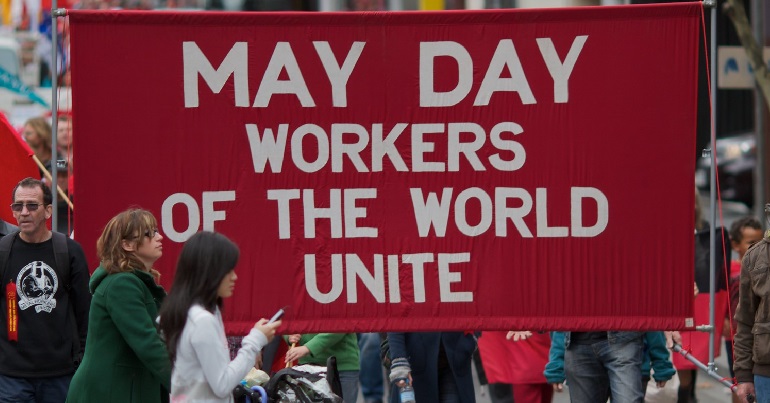 A May Day 2019 message from the International Trade Union Confederation (ITUC) stresses that “we need to fix the rules of the global economy”. And one key reason, general secretary Sharan Burrow says, is that “record inequality and economic insecurity are threatening democracy”.

The current system has “left billions of people behind”

Workers everywhere are increasingly living on the edge as corporate profits skyrocket.

“Recent decades of corporate globalisation”, she says, “have destroyed” the International Labour Organization’s (ILO) 1919 vision of a “social contract” to ensure the “social and economic conditions which would guarantee prosperity and peace”. In the process, she argues, the current system has “brought the world to the brink of environmental destruction and left billions of people behind”.

To fix this situation, she insists, we need to “liberate the trillions of dollars being hoarded in tax havens and the bank accounts of the oligarchs of corporate globalisation”; and we need to “harvest the promise of rapid technological change for the many, rather than the few billionaires who today control people’s destiny without accountability or conscience”. She also stresses that:

If we don’t get it right this time, we may never get another chance.

“A story of desperation, deprivation and rising anger”

Burrow then shares some statistics that “tell a story of desperation, deprivation and rising anger”, describing how:

Today there are 300 million working poor in the world, 190 million officially unemployed and 60% of workers in informal jobs. Every 11 seconds, someone somewhere dies because of hazardous and dangerous work.

Workers’ rights, she says, “are the foundations of social and economic justice”, but:

These rights are under attack in every region of the world, and the rules of global trade and finance have to change to stop the race to the bottom.

She explained this in more detail in a previous interview with The Canary.

The need for a ‘new social contract’

Burrow, therefore, stresses the need for a “new social contract”. And according to an ITUC petition, the ILO’s upcoming Centennial Declaration in June is a “once in a generation opportunity to let us fix the global economy”. For that reason, it says people should put pressure on the ILO to include in its declaration support for workers’ rights, “fairer wages”, “more oversight over their bosses”, and “building justice into the climate and technology transition”. The petition concludes:

Some bosses would rather continue with business as usual. If we raise our voices together, we can make them and governments listen.