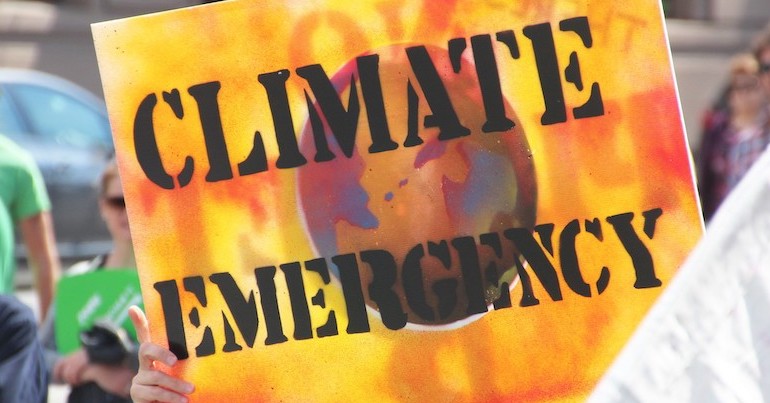 On 1 May 2019, parliament voted to declare an “environment and climate emergency”. This makes the UK the first country in the world to formally recognise the climate catastrophe that the planet is facing.

Labour called the vote in parliament. Theresa May reportedly “decided not to whip her MPs against” the motion. It passed unanimously. During the debate, Green MP Caroline Lucas said:

The world is warming at an alarming rate. Wildfires, droughts, heatwaves, and flood[s] are becoming more common. Ecological breakdown is not some distant problem – the climate emergency is now our ever-present and collective challenge…

This is a unique moment in history and the decisions we make right now matter. So yes, let’s unite to declare a climate emergency. And let’s also be honest – responding to this crisis cannot be done by maintaining the status quo.

We have a very small window to reverse things and declaring a climate emergency is the first step.

He hoped that the move would “set off a wave of action from parliaments and governments” globally. And he said that, as well as working “closely” with other countries to enact change, Labour would make it “clear to US President Donald Trump that he cannot ignore international agreements and action on the climate crisis”.

“But this is not just about words, it is about actions.”

Huge crowds gathered outside parliament to hear news of the vote:

Labour has just forced the UK Parliament to declare a #ClimateEmergency.

Real politics comes from the ground up, and that's what today has shown.

An emergency does not have to be a catastrophe – we now need a Green Industrial Revolution that will reprogramme our economy. pic.twitter.com/jbY0ywB3YU

The Green Party also celebrated the news, six months after calling a climate emergency itself.

But the UK Youth Climate Coalition (UKYCC) made a powerful point. This vote, it said, can’t be just “words” – it must be “about actions”:

But this is not just about words, it is about actions. We'll be right here until that happens. pic.twitter.com/RAy1LFz0mX

Lucas also insisted that change must now come in the form of action:

But words are cheap – we need urgent action

So to be clear

Looking ahead, writer George Monbiot listed some of the changes that are urgently needed:

The UK Parliament has declared an “environment and #ClimateEmergency”. Now we must act on it. It means:
No 3rd Runway at Heathrow
No fracking
Leave fossils in the ground
Retiring fossil fuel based infrastructure
Encouraging a shift to a plant-based diet
An end to economic growth

Right now, big finance is driving climate breakdown. The Bank of England has a key role to play in tackling climate change.The debate has started on how to use the power of the bank to unleash green investment. Join @PositiveMoneyUK & @FossilFreeLondon on Thursday to #GreenTheBoE

Whilst this move is great news, it’s also bittersweet. Because time is running out.

In October 2018, the UN Intergovernmental Panel on Climate Change (IPCC) released a devastating climate report. This concluded that global warming must be kept to 1.5°C at the most, half a degree hotter than right now, if we’re to limit the severest effects of climate chaos. According to the report, we don’t have much time left. It says:

So far, the strongest voice of reason in this crisis has come from children. As 16-year-old Greta Thunberg told the UN in 2018: “We have run out of excuses, and we are running out of time”. Children across the UK joined others around the world by walking out of school to demand that leaders take action to limit an impending climate breakdown.

Support then gathered momentum. And finally, adults began to rise to the challenge. Now, we must keep up the pressure to make sure real change comes.