In securing a climate emergency, Jeremy Corbyn has proved the people will lead his government - The Canary 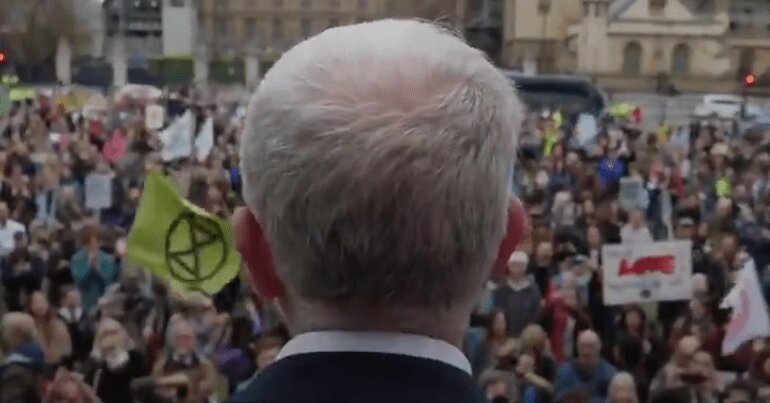 On 1 May, Jeremy Corbyn secured the status of a ‘climate emergency’ in the UK, making it the first country to do so. Labour’s rapid response to ongoing grassroots climate protests proves the people will lead his government.

Since Corbyn became leader in late 2015, corporate lobbyists have voiced concerns about their newfound lack of access. As one lobbyist told BuzzFeed at the time:

There’s nobody listening to us now. Who do you ever email if you want a meeting with Jeremy Corbyn?

This marks a significant break from Tony Blair who welcomed corporate lobbyists to the party. Instead, grassroots power, which has put the climate on the top of the party’s agenda, now characterises Labour:

Now it's about what we do next. #ClimateEmergency pic.twitter.com/V3nk4N5eXk

“The future is decentralised”

In a speech to a 2018 conference on alternative model’s of ownership, Corbyn provided some colour to Labour’s plans:

A green energy system will look radically different to the one we have today. The past is a centralised system with a few large plants. The future is decentralised, flexible and diverse with new sources of energy large and small, from tidal to solar.

Smart technologies will optimise usage so that instead of keeping gas plants running just in case there is a lull in renewable generation the system fulfils needs by identifying the greenest, most local energy source.

There will be much more use of local, micro grids and of batteries to store and balance fluctuating renewable energy.

In public hands, under democratic control, workforces and their unions will be the managers of this change, not its casualties.

The growth of green energy and green tech offers huge opportunities for job creation. Our publicly owned energy system will ensure a smooth transition and protect workers and communities, seizing those opportunities for the many, not the few.

And with the mass climate protests, these plans are now front and centre for the party. In parliament on 1 May, Labour’s Clive Lewis MP laid out the “biblical” threat of climate change and the Conservatives’ support for the dirty energy industry:

WATCH: The superb @labourlewis goes all biblical with the list of global afflictions. Oddly enough, this stuff is man made and just as reversible. For now. Certain doom is not an inevitability. #ClimateEmergency pic.twitter.com/U9fAIZKod7

Despite public opposition, the Conservative government has been rolling out fracking at sites in the UK. With the sitting government pushing ahead with fossil fuels, Corbyn’s Labour stands in stark contrast. The party’s responsiveness to people-powered movements is encouraging. And the stakes are too high to waste any more time.