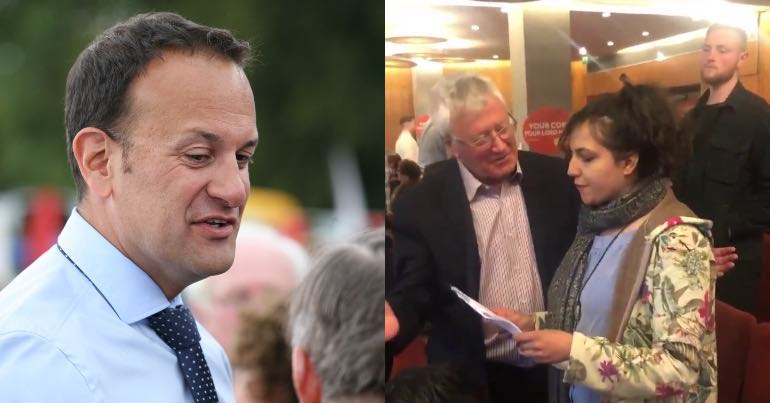 Left-wing protesters have interrupted an event hosted by Irish prime minister Leo Varadkar and his Fine Gael party. The deputy prime minister and minister for foreign affairs, Simon Coveney, was also present. Both men were in Cork for a public meeting to tell people about an upcoming vote on directly electing a mayor. But members of the socialist Connolly Youth Movement (CYM) cut in to point out Fine Gael’s poor record in government.

This record, they noted, includes a rise in homelessness in Ireland and a continuing crisis in the Irish health system. In the last week, two homeless people have died on the streets of Cork.

The group began the protest when one of its members asked for a minute’s silence in remembrance of the deaths of the two homeless people. When the chair of the meeting ended the silence early, the CYM member began a speech calling out the government. The crowd attempted to shout her down. Another member of the group stood up and also began criticising Varadkar and the government.

Activists disrupted a meeting by Fine Gael today as a form of protest. Fine Gael are not welcome in Cork and never will be.Disrupt their meetings and question them everywhere and all the time. AGITATE EDUCATEORGANISE

Posted by Connolly Youth Movement on Wednesday, 1 May 2019

Two more speakers then stood up, one of whom was confronted by an attendee.

Don’t ever listen to anyone who tells you politics is boring kids!! Fine Gael meeting stormed by protestors who say they are part of the Connolly Youth Movement. pic.twitter.com/IKWUtdb33g

An Ireland for everyone

CYM chair Alex Homits also stood up and began speaking along the same lines. He argued that:

And he asked for “sympathetic people to join us” in the battle for equality and justice.

Many people took to Twitter to voice their support for the protesters.

Terrible to think that a Fine Gael meeting would be disrupted by discussion of "health, housing, economy and other matters" 😳.

Another argued that it was a “splendid way to celebrate” May Day:

Well done @ConnollyYM
Connolly was there in spirit with you today. What a splendid way to celebrate May 1st

And when a local Fine Gael politician implied that CYM’s figurehead James Connolly “wouldn’t be impressed at their behaviour”, people were quick to show him his blunder:

Members of Connolly youth movement attempted to stop meeting. We live in a democracy & the man they claim to represent wouldn’t be impressed at their behaviour.

The man who lead an armed insurrection wouldn't be impressed with the shouting?

He spent the night before the Rising convincing Volunteers that it was a patriotic act to kill policemen. Do you think he’d jib at interrupting a meeting?

Homits later defended his actions and those of his fellow CYM members. In an interview with Red FM, he said their goal “was to draw maximum attention” to the problems in Irish society. He insisted that they “consciously” chose to protest in the way they did “to actually express our anger”.

Speaking to The Canary, Homits responded to Varadkar’s “anti-democratic” comments. He said:

Members of the Connolly Youth Movement understand democracy to be the public management and ownership of all aspects of society. As it stands, we have limited functions, provided to us via a ballot box.

And he pointed out that:

What is ‘anti-democratic’ is the fact that we have no recall functions for any of our elected officials and, despite the mantra that we can ‘hold them to account’ at election time, they continue to do what they want.

With homeless figures on the rise and the health system slowly falling apart, Varadkar and his government should face the consequences of their inaction. As a result, people must not stand idly by. The protest by the CYM is a step in the right direction. Hopefully, there is more to come.

If there isn’t, Ireland will continue to be pillaged by the forces of neoliberalism. These same forces occupy the highest political positions in the country. Their actions and policies must be fought whenever they appear and no matter what form they take. And that includes confronting them head on.