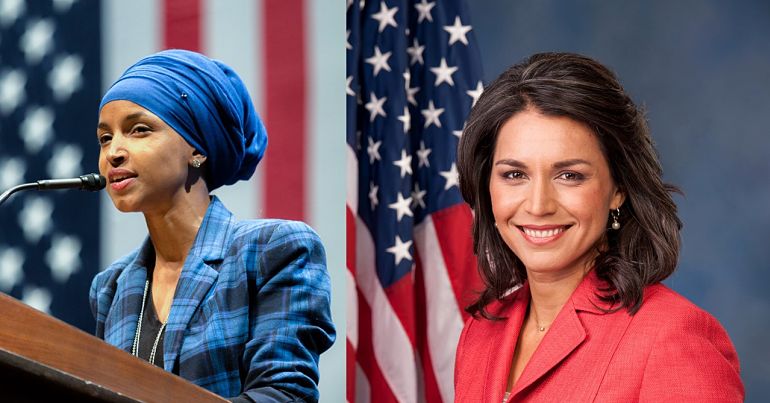 After another failed coup attempt in Venezuela, Washington appears to be seriously considering military intervention as a final resort. Venezuelan opposition leader Juan Guaidó has consistently failed to find either military or popular support for his repeated attempts to topple the elected government, suggesting his only chance of seizing power will be with the help of the US war machine.

And what better way to invoke the spirit of war in the US than mentioning Russia? As today’s front page of the Times read:

The United States has warned Russia to stop interfering in Venezuela as it raised the possibility of military action to remove President [Nicolás] Maduro from power.

Washington’s intensifying threats aren’t going without domestic resistance, though. Because key US progressives continue to raise their voices.

Ilhan Omar, one of the first two Muslim women to ever be elected to congress, has an outstanding record on condemning US intervention abroad. In February, for example, she asked special envoy to Venezuela Elliott Abrams:

Would you support an armed faction within Venezuela that engages in war crimes, crimes against humanity, or genocide if you believed they were serving US interests – as you did in Guatemala, El Salvador and Nicaragua?

A recent paper published by US economists Jeffrey Sachs and Mark Weisbrot estimated that US sanctions have killed 40,000 Venezuelans since 2017. And Ilhan Omar is among the very few US politicians to recognise the immense damage of US sanctions on Venezuelan society. Speaking to Democracy Now! about US involvement in Venezuela on 1 May, she said:

a lot of the policies that we have put in place [have] kind of helped lead the devastation in Venezuela. And we’ve sort of set the stage for where we’re arriving today. This particular bullying and the use of sanctions to eventually intervene and make regime change really does not help the people of countries like Venezuela; and it certainly does not help and is not in the interest of the United States. And I think, finally, we have folks in congress that see what Prof Sachs was referencing.

Omar also did what much of the Western media has not simply by mentioning the study, which also suggested that hundreds of thousands more Venezuelans could die due to intensifying sanctions. She then outlined the blowback which happens from :

Presidential hopeful Tulsi Gabbard, meanwhile, spoke to Fox News about the situation in Venezuela. She explained that relations between Venezuela, Russia, and China are nothing new. However, the US is using their presence with:

Sabre-rattling intentions, saying the United States needs to send in the US military now to wage yet another wasteful, counter-productive, regime-change war. And once again, it’s being done under the guise of humanitarianism.

If the US truly cared about ordinary Venezuelans, she suggested, it should try (in good faith) to broker conciliatory talks between the Venezuelan government and opposition forces. And she added:

When we look throughout history, every time the United States goes into another country and topples a dictator or topples a government, the outcome has been disastrous for the people in these countries…

I can tell you, as a soldier… I’ve seen first-hand the high cost of war, and pushing for this civil war – pushing for the use of military force – will only end up with more suffering and death and disaster for the Venezuelan people.

As activist Jorge Martin argues, the idea of negotiations at this stage is “utopian”; because the Venezuelan opposition has consistently backed out of talks at the last minute. In the last round of talks in 2017, for instance, the Venezuelan opposition crumbled under pressure from Washington and Colombia not to sign a deal with which both sides already seemed satisfied. Martin continued:

Whether or not negotiations could actually happen (or work) considering the highly aggressive approach of the Trump administration and its allies in Venezuela, Omar and Gabbard nonetheless provide important rays of hope. Because they know full well the damage that US interventions abroad have caused in the past. And crucially, Gabbard looks set to be on the podium for the Democratic Party’s presidential primary debates; so she has a real possibility to shift the debate in a truly humanitarian, anti-imperialist direction.