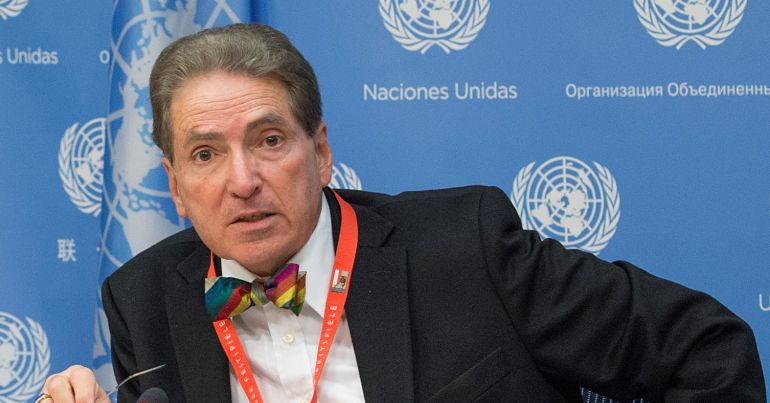 Over recent weeks, Alfred de Zayas has been one of the most prolific and high-profile critics of ongoing US intervention in Venezuela. And now, he has spoken exclusively to The Canary.

Between May 2012 and April 2018, de Zayas was the UN independent expert on promoting a fair and democratic global order. He also worked as a senior lawyer at the Office of the UN High Commissioner for Human Rights; and he’s written and lectured widely on issues ranging from Guantanamo Bay and the invasion of Iraq to nuclear pollution and extreme poverty. Last year, he became the first UN special rapporteur to visit Venezuela for 21 years.

He spoke to The Canary about: the legality of US intervention in Venezuela; the role of the mainstream media in preparing public consent for intervention; and how the UN can mediate the intensifying conflict.

US national security adviser John Bolton is the man currently leading the charge for regime change in Venezuela. He famously declared in 1994 that “if it [the UN building in New York] lost ten stories, it wouldn’t make a bit of difference”. And in 2018, he called the International Criminal Court “illegitimate”, threatening it with sanctions.

US interference in the internal affairs of a sovereign State violates customary international law, the UN Charter, articles 1 and 2, and the OAS [Organization of American States] Charter, articles 3, 18, 19, 20 etc.

Thus the unilateral coercive measures taken against the people of Venezuela constitute a grave violation of international law.

“Sanctions are the direct cause of death”

De Zayas then spoke about US sanctions, which have cost the Venezuelan economy billions of dollars since 2017, saying:

Article 20 [of the OAS charter] stipulates that:

‘No State may use or encourage the use of coercive measures of an economic or political character in order to force the sovereign will of another State and obtain from it advantages of any kind.’

War propaganda is illegal. But that’s not stopping either governments or the mainstream media.

Sabre-rattling and agitation… violate article 20(1) of the International Covenant on Civil and Political Rights, which stipulates: ‘Any propaganda for war shall be prohibited by law.’ The government is engaging in such propaganda – as is the mainstream media.

On 24 February, for instance, US senator Marco Rubio appeared to threaten Venezuelan president Nicolás Maduro with the death and destruction which Libya faced in 2011. US secretary of state Mike Pompeo has elsewhere claimed that Maduro’s “days are numbered”. The US government, meanwhile, continues to state that “all options are on the table” – a crude euphemism for military action in Venezuela.

The mainstream media is manufacturing consent for regime change

The Canary then asked de Zayas about the role of the mainstream media – notably ‘liberal’ outlets like the BBC and the Guardian – in manufacturing public consent for Western intervention in Venezuela.

Noam Chomsky wrote a book entitled ‘Manufacturing consent’ — and that is exactly what the NY Times, Washington Post, Chicago Tribune, Wall Street Journal, CNN, Fox, BBC, Deutsche Welle, France Info, Al Jazeera and most of the mainstream media are doing. They do it… by disseminating ‘fake news’, quite deliberately and thus far in total impunity.

In perhaps the most significant ‘fake news’ case regarding Venezuela, the mainstream media near-comprehensively bought Pompeo’s claim on 6 February that Venezuelan authorities had closed a major bridge to block ‘humanitarian aid‘. It was soon revealed that the bridge had never even been opened. This episode indicated the mainstream media’s overwhelming willingness to favour the Trump regime’s narrative (‘Maduro is a dictator who actively starves the Venezuelan population‘) over the facts.

We have a media that actually suppresses information. Thus, if you want to be informed, you have no choice but to read besides BBC and CNN (which you should read to know at least what they are peddling), all alternative media including The Real News, Democracy Now, Abby Martin, Medialens, RT, Telesur.

When the mainstream media omits vital context on Venezuela, it almost always has the effect of strengthening the case for foreign intervention.

In a BBC article entitled Venezuela aid: Genuine help or Trojan horse?, for instance, the outlet omitted that Washington’s special envoy to Venezuela Elliott Abrams literally used ‘humanitarian aid’ as a Trojan horse to smuggle weapons into Nicaragua in the 1980s.

On 16 February, CNN correspondent Nick Valencia combined fake news and propaganda by omission live on air. Standing in front of the very US military aircraft that had brought him to the Venezuelan border, Valencia falsely claimed that “basic goods… like… toothpaste and toothbrushes… aren’t available or accessible” in Venezuela, while omitting the mountain of evidence that would lay bare Washington’s true intentions in the country.

The UN is ready to help. “The problem is that the opposition wants to come to power by force”.

De Zayas then spoke about how the UN “came too late” in previous global crises (e.g. Ethiopia/Eritrea, East Timor, and Sudan). However:

In the case of Venezuela, Secretary General Antonio Guterres has offered his good offices in mediating and the High Commissioner Michelle Bachelet has endorsed the call for mediation. The problem is that the opposition wants to come to power by force – by a coup.

The opposition, he explained, thwarted negotiations – which occurred between 2016 and 2018 – with the Venezuelan government:

On 6 February 2018, the compromise text of a solid agreement was on the table. And at the last moment, there was a phone call from Colombia to the opposition leader Julio Borges – ‘No firme’ (Don’t sign). And he then refused to sign. The whole thing collapsed. And effectively, the opposition took the government for a ride.

‘Nothing more undemocratic than a coup’

Many ‘liberal’ politicians and commentators have chosen to focus on Maduro’s flaws when discussing Venezuela. In doing so, they question the worthiness of Venezuela as a target of US interference rather than Washington’s fundamental right to intervene in another state.

The main issue at stake here, as de Zayas stressed, is Venezuela’s right to make its own decisions:

There is nothing more undemocratic and corrosive of the rule of law than a coup. And yet we see the US, Canada, and several countries in the EU [including the UK] supporting this massive violation of international law.

He also highlighted the memory of Iraq, saying:

It is reminiscent of the revolt against international law when George W. Bush, Tony Blair and the “coalition of the willing”… decided to throw the UN Charter out the window and to conduct an aggressive war against the people of Iraq — with massive human consequences, war crimes and crimes against humanity. No one has been held accountable.

In the coming days and weeks, a serious escalation of violence is likely to occur in Venezuela. And the mainstream media’s consistent failure to report truthfully and accurately on ongoing events makes it an active agent in the conflict. As with the invasion of Iraq, by the time ‘liberal’ politicians and journalists issue their face-saving back-tracks and apologies for promoting war, the damage and destruction may already be done.

The world must listen to de Zayas before it’s too late. Peace and democracy in Venezuela depend on it.