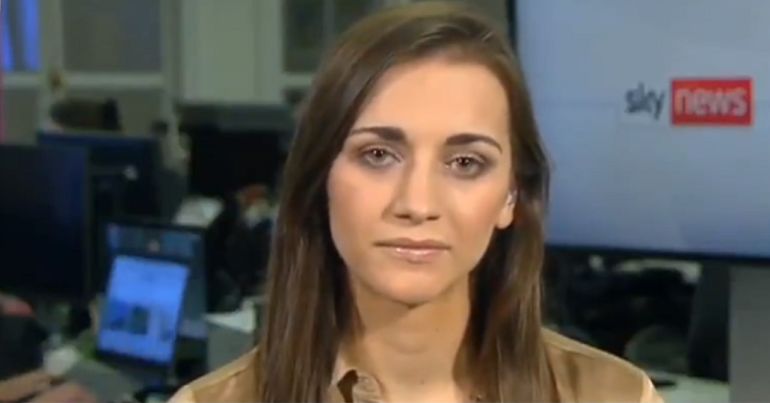 Austin was speaking about a Sky poll that found that 66% of people think the mainstream media deliberately spreads lies to push a secret agenda. The host said:

People according to this data are losing trust in politicians and in the mainstream media. And I had a sense of this over the weekend where I criticised Jeremy Corbyn for saying that the media were hostile to him, and I said ‘actually we’re just challenging you’… Lots of Corbyn supporters came on and just criticised the mainstream media… it was a very strong criticism… Is that a result of people just having passionate views one way or the other and watching the mainstream media try… and challenge their politicians.

Worth watching this clip for
– Sky News presenter Mark Austin's shock that people don't trust mainstream media
– Grace Blakeley's excellent explanation of how what's going on in both the #BrokenMedia and social media reflects the collapsing centrist order pic.twitter.com/B3ElVaF8ob

Blakeley also argued that historical and economic trends are the main reason for the apparent polarisation of politics, rather than social media:

People are very keen to… blame social media… But I actually think we are seeing genuine increases in division and polarisation in the political spectrum. Because actually that kind of liberal centrist politics of the centre… isn’t really working anymore… The issues that we’re facing, whether that’s climate change, the economy’s struggling a huge amount… people want… systematic, transformational answers to those problems. And I think a lot of that, in terms of… Labour party policy on the economy, about socialising ownership, about dealing with these regional imbalances… actually resonates very strongly.

Biased in favour of the elite

Channel 4 News anchor Jon Snow has previously made a similar point to Blakeley’s. Speaking at the Edinburgh TV Festival in 2017, the veteran journalist said:

This privately educated elite continues to dominate the media, according to the Sutton Trust. The corporate media is hierarchical, establishing an editorial bias from the top down. Most journalists do not have much sway in the direction of the outlet they work at. Yet as Snow points out, around 80% of top editors went to elite schools. This means mainstream publications risk having a different set of priorities to the public, where 88% went to comprehensives.

Mainstream media bias against Jeremy Corbyn is also well-documented. For instance, a report published by the London School of Economics and Political Science found strong media bias against Jeremy Corbyn, claiming the press had turned into an “attack dog” against the opposition leader. According to the report, 56% of the Corbyn-related articles analysed did not give the Labour leader a voice at all.

Or take the sheer number of pro-establishment right-wingers on BBC Sunday Politics. In 19 episodes, the BBC brought on pundits well to the right of the political spectrum on every show. By contrast, the public service broadcaster included people on the left only three times. Despite Corbyn’s Labour winning 40% of the vote in 2017, that left 16 episodes without a meaningful progressive viewpoint from any of the three guests.

And look at analysis of media coverage of the EU referendum itself. Findings from the New Statesman showed that, while an array of UK broadcasters balanced Remain and Brexit voices, 71.2% of political sources were from the Conservative Party, compared to just 18.4% from Labour.

As Blakeley points out, the data is damning when it comes to mainstream media bias. But the corporate media doesn’t have full control over the flow of information any more. People who want genuine change must continue to fight back through social media and their own conversations.