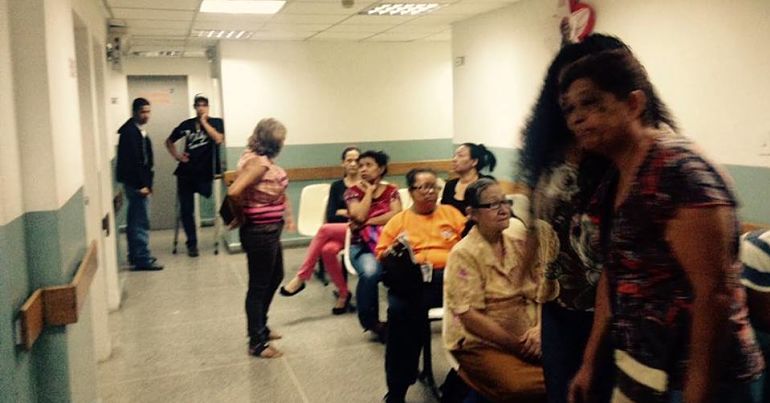 Prominent US economists Mark Weisbrot and Jeffrey Sachs have just published a paper that estimates US sanctions to have killed 40,000 Venezuelans between 2017 and 2018.

The report is entitled Economic Sanctions as Collective Punishment: The Case of Venezuela.

US sanctions are “causing grave harm to the Venezuelan people”

In a press release published by the Center for Economic and Policy Research (CEPR), Sachs said:

Venezuela’s economic crisis is routinely blamed all on Venezuela. But it is much more than that. American sanctions are deliberately aiming to wreck Venezuela’s economy and thereby lead to regime change. It’s a fruitless, heartless, illegal, and failed policy, causing grave harm to the Venezuelan people.

The report then goes into more detail.

In August 2017, it explains, an executive order by Donald Trump introduced financial sanctions that prevented Venezuela’s government from legally using the US financial system. He also prohibited CITGO, a US-based corporation owned by the Venezuelan government, from sending profits or dividends back to Venezuela. Those dividends alone had averaged almost $1bn per year in the 2015-2017 period.

Weisbrot and Sachs note that US Treasury warnings to banks and other institutions to “limit any exposure” to “public corruption” (i.e. the government of Venezuelan president Nicolás Maduro) may have done even more damage than the 2017 executive order itself. Basically, financial institutions faced with this pressure may close accounts and deny credit without even bothering about the details of the executive order.

Trump’s fingerprints in one chart

The undeniable fingerprints of Trump’s sanctions are exposed by a chart contained in the report: 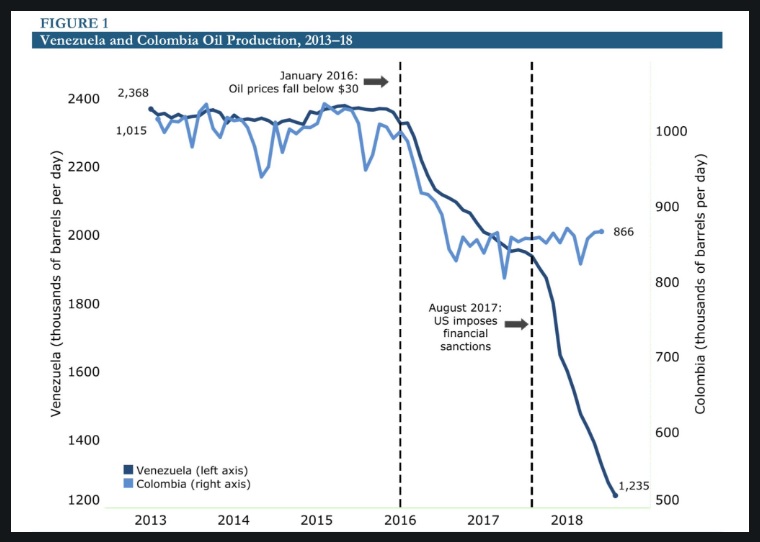 The chart contrasts what happened to Colombian and Venezuelan oil production after oil prices began to increase in August of 2017 – just as Trump imposed sanctions on Venezuela. Colombia’s oil production stabilized. Venezuela’s declined at a much faster rate than ever before. This cost Venezuela $6bn in oil revenue in the first year of the sanctions alone. The authors stress that this loss is in hard currency required to pay for essential imports.

Based on a survey by Venezuelan academics who oppose the Maduro government, Weisbrot and Sachs say there was a 31% rise in general mortality between 2017 and 2018. That translates to an extra 40,000 deaths. Whatever the exact number, data for key imports leave absolutely no doubt that tens of thousands of people are dying as an apparent result of US sanctions.

Imports for food and medicine combined in 2018 were only $2.6bn. That means only $140m worth of medicines were imported in 2018, down from about $2bn in 2013-14 when the economy was still growing, as Weisbrot noted in this interview. Of course, medicine is vastly harder to substitute with local production than food.

Ramping up the barbarism in 2019

Trump’s recognition of relatively unknown opposition leader Juan Guaidó as Venezuela’s interim president in January 2019 became a pretext for intensifying the sanctions. This meant sanctioning Venezuelan oil sales to the US by saying they could only be invoiced by Guaidó’s ‘government’. The economy could contract by 37.4% in 2019 as a result, according to Weisbrot and Sachs.

Sadly, legal accountability is a long way off for a US government that employs warhawks like John Bolton and Elliott Abrams, and a secretary of state (Mike Pompeo) who has publicly boasted about the criminality of the CIA.