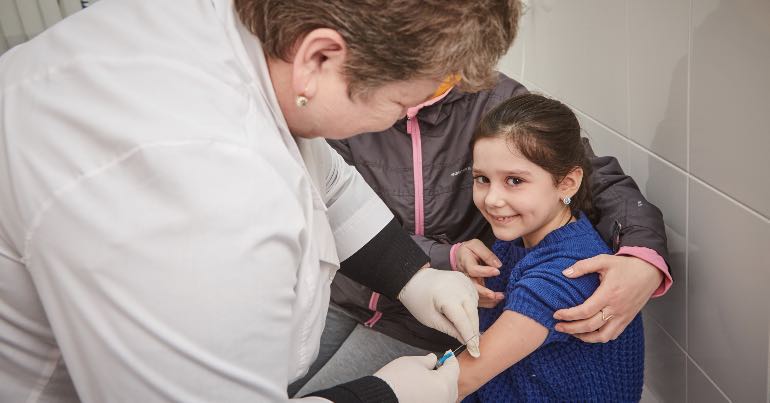 Measles is on the rise in Ireland according to a new report from UNICEF. It said that cases of the disease increased by 244% from 2017 to 2018. The 25 April report found that, worldwide, roughly “169 million children missed out on the first dose of the measles vaccine between 2010 and 2017”. And it also said that “fear or skepticism” about vaccines is partly to blame.

Dr Lucy Jessop of Ireland’s National Immunisation Office had earlier said the uptake rate of the measles vaccine in Ireland stands at 92%. But she said that needs to increase to 95% “to make sure that measles does not circulate here”. It has been reported elsewhere that, in parts of Ireland:

targets for immunisation were over 20% below what they were supposed to be, with serious problems identified in West Cork, Wicklow, and parts of Dublin.

UNICEF itself noted that there were 25 cases of measles in Ireland in 2017; but in 2018 it rose to 86. And the Journal has reported that there have already been 48 cases reported this year. UNICEF insists that:

Widening pockets of unvaccinated children have created a pathway to the measles outbreaks hitting several countries around the world today.

UNICEF also discussed possible reasons for the return of measles. Among other things, it said the cause is ”complacency, and in some cases fear or skepticism about vaccines”.

Although not named by UNICEF, disgraced former doctor Andrew Wakefield is notorious for creating fear about vaccines. In a paper published by the Lancet in 1998, he and his co-authors claimed that the three-in-one vaccine for measles, mumps, and rubella (MMR) caused autism. As a result, vaccination rates fell.

The General Medical Council later struck him off the medical register. And the Lancet retracted his original research paper because, in part, of “undisclosed financial interests”.

Irish pro-vaccine and autism rights activist Fiona O’Leary spoke to The Canary about the issue. She lives in one of the areas of Ireland described as having “serious problems” with vaccine uptake. After saying that she “lost a cousin to meningitis”, she explained:

Why I do this is really because I care about children. I care about the groups in our society that are not able to get vaccinated.

She also pointed out that:

When we vaccinate, we protect those vulnerable people. It’s not just about yourself.

And she thinks part of the problem is that anti-vaxxers (people who oppose vaccinations) “believe they’re doing the right thing, because they are brainwashed”.

But this is just part of it. O’Leary has had a lot of experience with anti-vaxxers. And she says that many of them now believe that “vaccines cause cancer” so big drug companies can make money.

O’Leary, who’s autistic, further argued that the anti-vaccine movement is taking advantage of autistic people for its own ends. What’s more, she observed that some of them think “the government is trying to create autistic people so they can control them like robots”.

She also insists that a “definite link” exists between the far right and the anti-vaccine movement. She said they describe vaccinations as a “genocide programme”. For her activism, she has received threats from these people.

One prominent Irish far-right anti-vaxxer has said O’Leary “needs to be taken under control and dealt with and once and for all”. O’Leary has also received threats over the phone and YouTube.

In summary, she calls the movement against vaccination “health terrorism”.

To help tackle the rise of anti-vaccination lies, Facebook has previously announced that it would stop “vaccine misinformation”. But maybe people and governments need to take strong steps too. One possible solution is the introduction of mandatory vaccinations. The Irish health minister is currently looking into this.

And considering the risks of allowing the anti-vaxxers to spread their lies unchallenged, this is a potential solution that every country should look into. Because the consequences are too high not to.