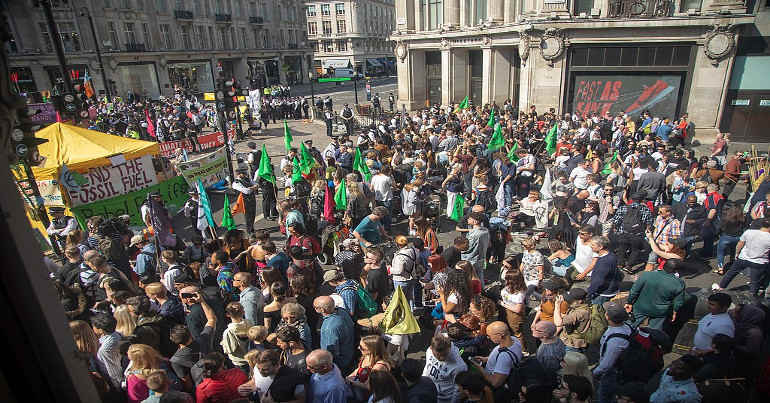 Extinction Rebellion (XR) activists spent the last day of their occupation of Marble Arch discussing revolution with activists from the Kurdish freedom movement. The Marble Arch occupiers had invited Kurdish activists and their supporters to run a workshop on creating a revolution based on democracy, ecology and women’s freedom.

XR has held a ten-day-long occupation of several sites in London. Their protests are demanding action on climate change. The key demand is that the government set up a Citizens’ Assembly on climate and ecological justice.

Kurdish activists and their supporters welcomed the invitation from XR. Jack Eyre, an organiser for London Kurdistan Solidarity, said in a press release:

Organisers from the Kurdistan Students Union, Kurdistan Solidarity Network and Women’s Strike Assembly spoke to a crowd of over 100 people about the history of the Kurdish freedom struggle and the thousands of people around the world who are on hunger strike to end the solitary confinement of Abdullah Öcalan in Turkey.

Democratic confederalism is the practice of governing society from the bottom up, through autonomous communes cooperating together. And it is the basis of the ongoing progressive revolution in Rojava (northern Syria).

The workshop was received with great enthusiasm; despite the tents being packed down around us and the general feeling of winding down, 100 people sat and stood to learn about a concise history of the Kurdish freedom movement, democratic confederalism, the women’s revolution, the ecological pillar of the revolution and international solidarity. Afterwards, people split into groups to discuss in depth the above pillars and how the three forms of domination – the nation state, capitalism, and patriarchy – manifest in our lives, countries and communities; and how the three principles of direct democracy, gender liberation, and social ecology can help overcome them. The feedback from the groups reflected the need for intersectional views on struggle and liberation.

The Rojava revolution is relevant to all of our ecological struggles

On social media, some people questioned the relevance of the politics of the Kurdish freedom struggle to XR’s movement against climate change. But as one person commented:

Mass extinction is a worldwide issue, and Rojava is working toward building an ecological, low impact society. I don’t see how it doesn’t align with the cause. If you don’t think giving a voice to people literally fighting… for their lives is good PR, idk what to tell you

Indeed, the revolutionary ideas of Rojava are extremely relevant to those of us who want to create a more ecological and just society. The revolution has created a society where people organise via a network of communes which send delegates from neighbourhoods to citywide and regional levels. This revolutionary system enables people to discuss the issues affecting their lives, find solutions and implement them. And ecology is a core principle of the revolution, as The Canary reported previously.

The communes are already putting these ecological ideas into practice; even in the midst of the ongoing war. The Internationalist Commune of Rojava, for example, is trying to combat the damage caused by over-reliance on wheat monoculture and pesticides by planting tens of thousands of trees. The tree planting is part of an initiative called ‘Make Rojava Green Again’.

Dealing with the ecological crisis needs revolutionary change from the grassroots

The communes of Rojava are a great example of how ecology and politics are closely bound together. Learning from the experience in Rojava can provide a structure for people to look for solutions to our current ecological crises.

If we are going to move beyond this crisis, we need to see that climate breakdown is a political issue. We will need to create structures that put the power in the hands of people at a grassroots level. And there is a lot we can learn from the Kurdish freedom struggle in taking the first steps along that path.