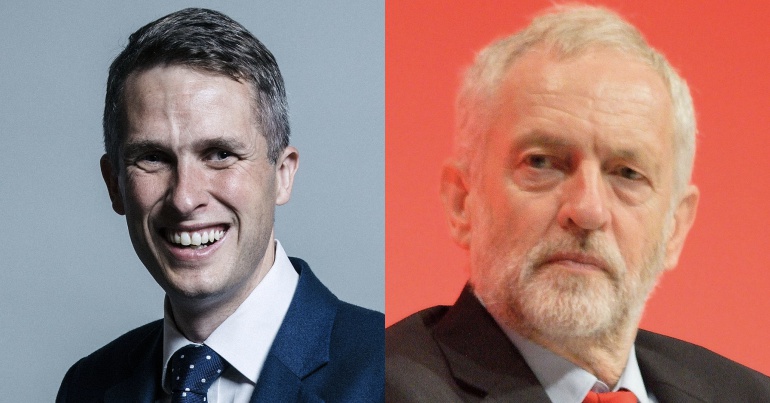 On 1 May, Theresa May fired defence secretary Gavin Williamson. This is because he’s accused of leaking information after a meeting between ministers and the National Security Council. Williamson has denied the charges. But one awkward fact remains. This is the same man who said Labour leader Jeremy Corbyn “cannot be trusted”.

A Downing Street statement said May “lost confidence in his ability to serve”. In a letter, the PM also told Williamson that she had “compelling evidence” he was responsible for leaks concerning Chinese firm Huawei and UK security forces. The leaked information alleged that May agreed Huawei, a Chinese telecom giant, should play an integral role in developing the UK’s 5G network. However, this also sparked security concerns that such close involvement from a Chinese company could threaten UK national security.

Williamson was offered the chance to resign. He refused and May sacked him. Penny Mordaunt is now defence secretary.

In a letter to May, Williamson strongly denied the allegations. He also stated that he hoped May firing him was not a “temporary distraction”:

The letter from the Defence Secretary, Gavin Williamson, suggests that the Prime Minister sacked him to create a 'temporary distraction'.

This reckless Tory in-fighting is a danger to us all. And Theresa May clearly has no authority left.#SackThePM pic.twitter.com/6TCXesxMTx

NEW: .@GavinWilliamson tells me he “wanted a police investigation because I would have been cleared. They would have had to have evidence. That is what I wanted” Tells me he believes this was “a witch hunt from the start” & “in a kangaroo court with a summary execution”

Spoken to Gavin Williamson. He swore on his children’s life to me that he didn’t leak the Huawei news and neither did his staff. Said he believes this is the settling of a vendetta between him and Mark Sedwill

Meanwhile, the BBC‘s Andrew Neil noted that May’s ‘lost’ a lot of people from government since taking office:

The sacking of Defence Secretary Gavin Williamson makes him the 38th person to have left the May Government in just over 12 months, and the sixth Cabinet minister. It’s a departure record.

Just over a year ago, Williamson claimed Corbyn “cannot be trusted”. He also accused him of a “betrayal of this country” after the Sun alleged Corbyn met and ‘briefed’ a Czech spy in 1968. These claims later turned out to be ungrounded.

So many people pointed out a subtle irony to Williamson’s fate:

Just over a year after Tory minister Gavin Williamson accused Jeremy Corbyn of betraying the country, Williamson betrayed the country himself. Some MPs have called the Huawei leak treason.

How many more reasons do we need to #VoteLabour2May pic.twitter.com/8rVAqxk0lK

Gavin Williamson – the man who called Jeremy Corbyn a "security risk" has just been fired…. for being a security risk.

Gavin Williamson was a Whip when he bought 10 DUP MPs for May with £1 billion of our money.

He claims he got carried Huawei… pic.twitter.com/qYWBVye4iC

But, jokes aside, serious questions still remain concerning any future police investigations over this matter. As the Guardian reported, shadow defence secretary Nia Griffith insisted that Williamson should face prosecution if he did leak the story. Griffith said:

The Tories are in chaos and incapable of sorting out their own crisis. Conservative infighting has undermined the basic functioning of government, and has now potentially put security at risk. The police must urgently investigate.

Scotland Yard said there’s no current investigation underway. In a statement, it said:

Clearly, if at any stage we receive any information that would suggest criminal offences have been committed, then we will look into that.

Williamson still insists he’s innocent and it seems May has no intention of backing down. So for now, it’s just another day and another crisis in the ongoing chaos of the Tory party.