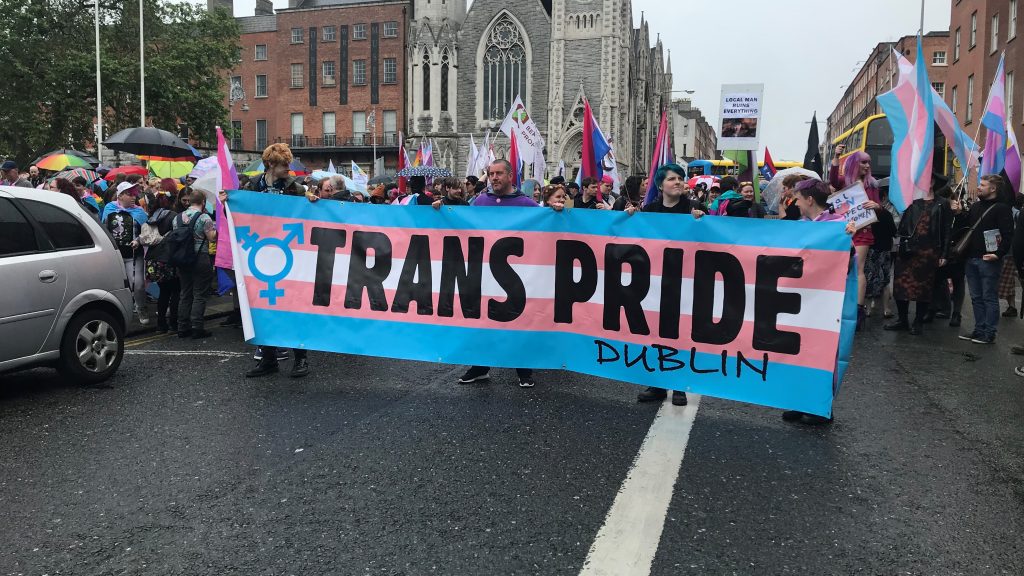 Hundreds of people have taken to the streets of Dublin to support Trans Pride.

The second annual protest for the rights and needs of the trans community saw participants gather at the Garden of Remembrance and march to Merrion Square on Saturday.

The march took place on the anniversary of the death of Marsha P Johnson, famous for participating in the Stonewall rebellion which sparked a global movement for LGBTQI+ liberation, and those gathered were asked to remember her as the fight for trans rights continues.

Noah Halpin, of the This Is Me campaign, called on the Government to do more.

He said: “I’m cautiously optimistic, there’s little bits of change happening, but it’s very slow, which is why days like today are so important.

“This year we met Simon Harris (health minister) and told him that it wasn’t good enough that it was a three-year-long waiting list for hormone replacement therapy, that we have no surgery options in Ireland, and that mental health services for trans people are completely inadequate.

“This needs to change immediately, not in two years, right now.

“The Gender Recognition Act is still being held up, there are non-binary people not legally recognised by the state, there are young trans people who cannot self-determine their gender identity.

“Healthcare is still inadequate, it’s being gate-kept, we need to stand up and say that needs to change right now.”

She said: “I think it’s vital we support the trans community, it’s great to see the changes in society, people recognising that gender is not binary, but there are still issues.

“Attacks on trans people are on the increase, trans healthcare in this country is not provided on the public health service, and housing is hitting people who are trans who are not accepted by parents, we want to bring all these struggles together.

“There are a number of things that the Government haven’t progressed, we were promised changes to the Gender Recognition Act, huge waiting lists on healthcare, people are going abroad for surgery, we’re exporting healthcare.

“The Sex Education Bill, why is that being left languishing?

“We need LGBT+-friendly sex education in our schools, maybe we wouldn’t have some transphobic attitudes in society if we did.”

Protesters on the march called for a number of demands to be met, including free trans healthcare based on the informed consent model, legislation for non-binary people, and an end to violence against the transgender community.

Ireland passed the Gender Recognition Bill in the Dail and the Seanad four years ago, making Ireland the fourth country in the world to give people a right to gender based on their own self-declaration.