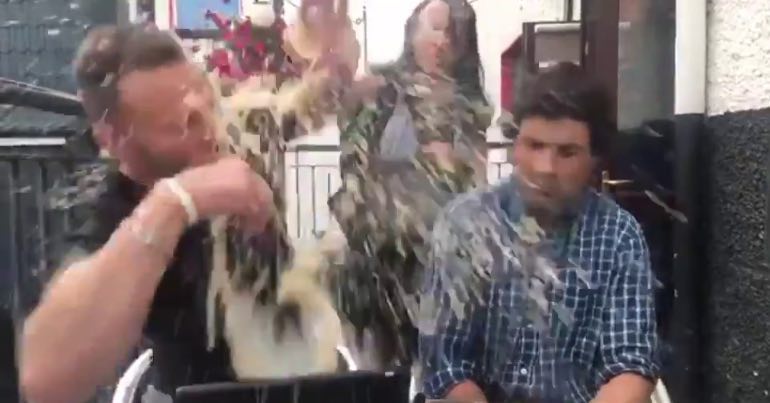 An Irish activist has ‘milkshaked‘ a far-right YouTuber while livestreaming. The attack happened while he was delivering a tirade against refugees.

The YouTuber has also previously said the arrival of asylum seekers in Ireland represents a “war” on Irish people.

The target of the milkshake was Rowan Croft, AKA Grand Torino. He was in Carrick-on-Shannon to livestream about the recent arrival of 30 asylum seekers in the town. Croft regularly visits areas where the government is due to house asylum seekers.

A fellow far-right YouTuber also joined him to discuss the issue. Croft’s interviewee claimed the Irish are “being ethnically cleansed”. He went on to declare that:

The thing is that these so-called ‘asylum seekers’ that are brought in to this country, they’re brought here, they’re given free social welfare, free housing. They get free cars.

In the middle of the night the immigrants are just shipped in.

He also argued that Ireland is becoming a “low-trust society” due to “the alternative communities that are coming into” Ireland.

But it was after he commented that the government was housing asylum seekers in hotels when an anti-racist activist threw a milkshake at him. Croft stated:

Many of the people down in Rosslare said they said they weren’t having it, they were going to burn the hotel down. Pretty much like what had happened back in the day and I’ve no problem saying that.

And it was then that the activist threw the contents of a coffee cup at him:

One of Ireland's far right provocateur's just got milk shaked in Carrick-On-Shannon at the very moment he was saying he had no problems with arson attacks on refugee hostels. He's a Youtuber known as Tan Torino because he joined the British army in the 1990's. pic.twitter.com/CGkuC9Y0N4

If there was anything else inside [the coffee cup] believe you me, I’d have choked her the fuck out.

Croft and those who were with him chased after the activist. When he caught up with her, Croft could be heard saying:

Are you prepared to bring in dirty immigrants in the middle of the night?

But Croft has also made similar comments in the past. A few weeks before the milkshaking, he declared that bringing asylum seekers into Ireland are new “plantations” of the country. This refers to the plantation of Ireland when King James I pushed native Irish people off their land to give it to British settlers.

He insisted that the Irish government is buying up properties for asylum seekers for this reason. The government, he said, wants “to disperse the planters into various locations throughout Ireland”. And this, he maintained, “is a war”.

The opinions of Croft and his supporters are shocking but not surprising. Across Europe, the far right has emerged once again. It promotes violence and hatred of anyone and anything it thinks is different.

In this case, then, Ireland is not unique. Over the last 12 months, arsonists have attacked hotels earmarked for asylum seekers. The language of Croft and other Irish far-right figureheads ramps up this hostility. And that is a danger to us all.