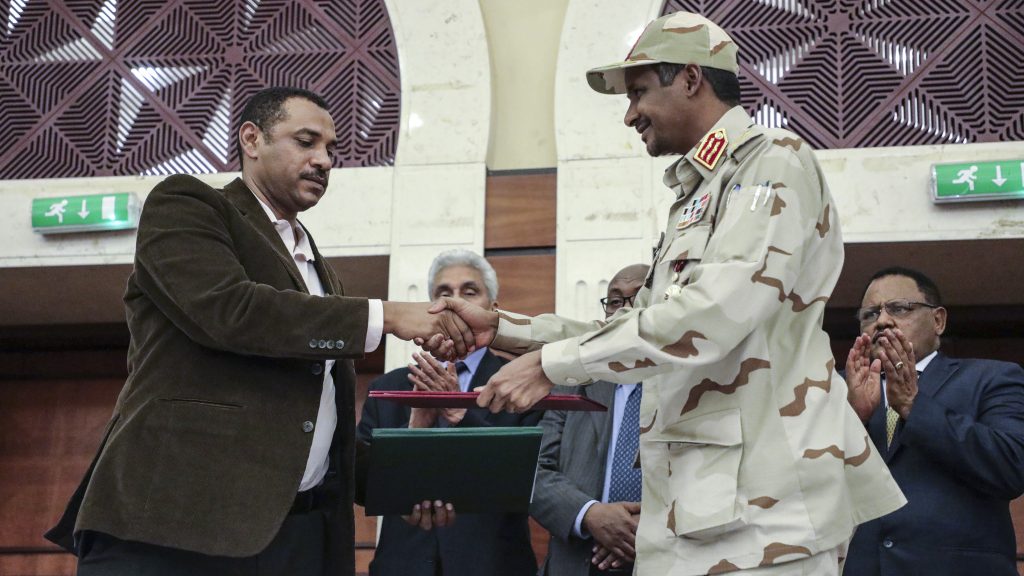 Sudan’s pro-democracy movement and the ruling military council have signed a document that outlines a powersharing deal. But the two sides are still at work on a more contentious constitutional agreement that would specify division of powers.

The signing ceremony in the capital Khartoum, after marathon overnight talks, marks an important step in the transition to civilian rule after mass protests forced the military overthrow of long-ruling autocrat Omar al-Bashir in April.

But the military appears to have the upper hand following weeks of negotiations and a deadly crackdown last month in which security forces violently dispersed the protesters’ main sit-in, killing at least 128 people cross the county, according to protest organisers.

The document signed on Wednesday would establish a joint civilian-military sovereign council that would rule Sudan for a little over three years while elections are organised. A military leader will head the 11-member council for the first 21 months, followed by a civilian leader for the next 18.

It marks a significant concession by the protesters, who had demanded an immediate transition to civilian rule. The pro-democracy movement would appoint a cabinet and the two sides would agree on a legislative body within three months of the start of the transition. 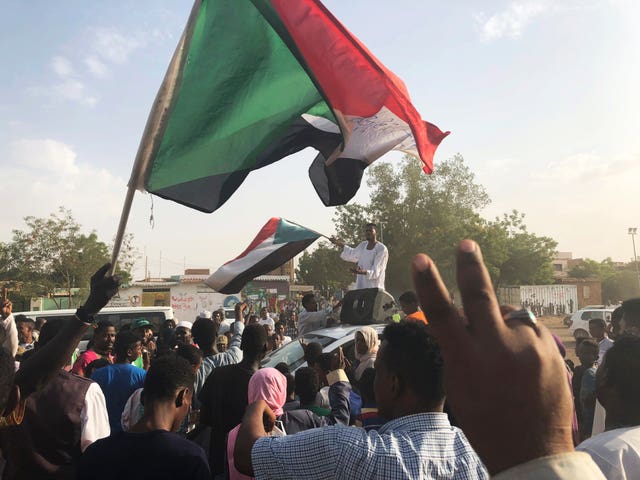 A “big hurdle” still ahead

Negotiators have yet to agree on a division of powers between the sovereign council, the cabinet and the legislative body, which would be enshrined in the constitutional document.

That document, which they hope to adopt in talks scheduled for Friday, would also set the terms of military leaders’ potential immunity from prosecution.

“This is the big hurdle. Sudan’s future after al-Bashir will be defined by this constitutional declaration,” said Rasha Awad, editor of online Sudanese newspaper Altaghyeer.

The military has said the sovereign council should be able to veto appointments to the cabinet and cabinet decisions, something the protesters fear would deprive it of any real power. The protesters have also said that members of the council should be stripped of immunity if they are implicated in last month’s crackdown.

The Communist Party said it and some other factions rejected the deal because it did include the immediate handover of power to civilians and did not provide for an international investigation of the violence.

The two sides have agreed on a Sudanese investigation into the violence, but have yet to outline its scope.

“Ushering in a new era”

The agreement signed at a ceremony broadcast by state TV stems from a meeting last month brokered by the US and Britain with their allies in Egypt, Saudi Arabia and the United Arab Emirates (which all back the military). The diplomatic push ended weeks of stalemate that had raised fears of further violence or even civil war.

“We are ushering in a new era,” said Ibrahim al-Amin, a negotiator for the Forces of the Declaration of Freedom and Change, a broad-based coalition including independent professional unions, traditional political parties and other groups.

“We have suffered enough from the totalitarian dictatorial regime.”

The military was represented by General Mohammed Hamdan Dagalo, known as Hemedti, who has consolidated power since al-Bashir’s overthrow and whose paramilitary Rapid Support Forces are accused of leading last month’s massacre. He hailed the agreement as a “historic moment in Sudan”.

Envoys from Ethiopia and the African Union, who had spearheaded mediation efforts, also praised the agreement at Wednesday’s ceremony.

Al-Bashir, who ruled Sudan for 30 years, has been jailed in Khartoum since his removal. In May, he was charged with involvement in killing protesters and incitement to kill protesters during the popular uprising that started in December as a result of ‘economic reforms’ aimed at pleasing the International Monetary Fund (IMF). He introduced austerity measures and cut subsidies, which got the IMF’s backing, but not the Sudanese people’s.

He is also wanted by the International Criminal Court on charges of war crimes and genocide linked to the Darfur conflict in the 2000s. But Sudan’s military has said it will not extradite him to the Hague. He was the only sitting head of state subject to an international arrest warrant.