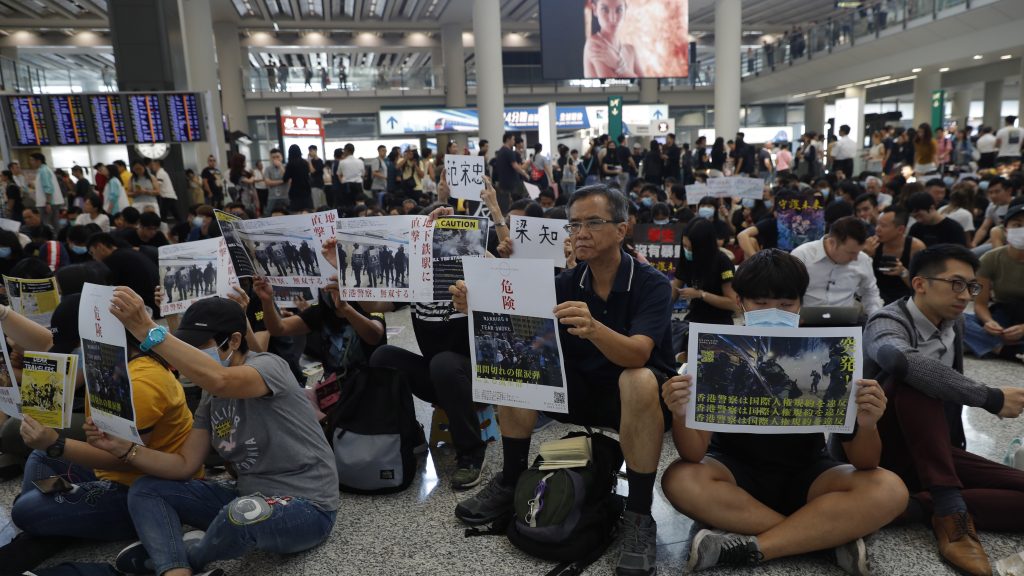 Pro-democracy activists are demonstrating at Hong Kong airport even as the city sought to reassure visitors of their welcome despite increasing levels of violence surrounding the two-month-old protest movement.

The government concedes road blockages and confrontations between police and protesters have caused inconvenience, but says they were limited to specific areas.

The protests, however, are not abating and more are planned for this weekend, including at the airport, where protesters holding signs staged a sit-in at the arrival and departure halls.

Police said they had not received a formal application for the airport protest and warned against violence or disruption that could endanger public safety.

They said they were considering applications for weekend marches elsewhere.

Signs held by protesters in the arrival hall included “There are no rioters, only tyranny”, while pamphlets stacked in piles warned visitors of the heavy use of tear gas by police.

Officers said 800 canisters were used during protests on Monday alone, and journalists and protesters say many suffered skin irritation and internal injuries as a result.

While the airport appeared to be operating normally, extra identification checks were put in place for travellers and staff, and airlines were advising passengers to arrive earlier than usual for check-in.

A similar airport protest on July 26 ended peacefully, and there was no indication on Friday that police planned to use force to end what is planned as a three-day demonstration.

At a briefing, officer Vasco Williams said the force did not plan to issue an outright ban on demonstrations but would gauge each application based on the ability of organisers to maintain order.

However, Williams and three other senior officers at the briefing repeatedly declined to answer questions about police tactics, including the alleged use of expired tear gas canisters, or the recall from retirement of former deputy commissioner Lau Yip-shing.

Lau oversaw the response to pro-democracy protests five years ago when police were accused of using excessive force. He began serving in the specially created temporary post of deputy commissioner of police for special duties on Friday.

Police testing of water cannons for possible use against protesters has also drawn concern, with Amnesty International issuing a statement calling for “extreme caution” in any such deployment. Along with tear gas, police have used rubber bullets, sponge-tipped grenades and beanbag rounds.

“The use of these powerful weapons in the city’s densely populated streets could cause serious injuries and further inflame tensions,” Amnesty said.

Police actions so far raise questions as to whether officers can “use water cannons in a way that doesn’t put people at risk of serious injury”, the group added.

A Hong Kong government statement referring to the travel safety warnings issued by 22 countries and regions appeared to acknowledge the potential for the protests to devastate the territory’s crucial travel industry.

The statement said the government and the travel industry were working to minimise disruption and “all stand ready to welcome and assist visitors to Hong Kong any time”.

Sparked two months ago by proposed extradition legislation that could have seen suspects sent to mainland China — where protesters say they could face torture and unfair politicised trials — the protests have since morphed into calls for broader democratic reforms in the former British colony, along with the resignation of chief executive Carrie Lam and investigations into alleged police abuse.

Hong Kong police say 592 people have been arrested since June 9, ranging in age from 13 to 76. They face charges including rioting, which allows for prison terms of up to 10 years, along with interfering with police duties and taking part in unauthorised gatherings.