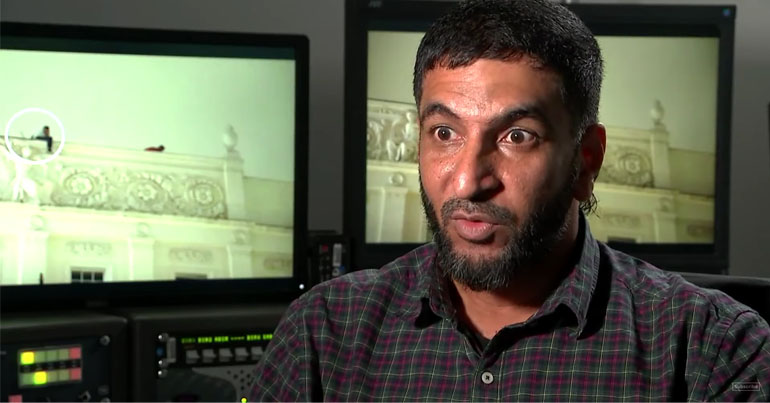 A human rights protester took to the roof of the Bahrain embassy in London on 26 July. Video uploaded online showed him sitting at the roof’s edge before someone appeared to pull him back onto the roof. And what he said happened next made him ‘fear’ becoming “a second… Khashoggi”.

As The Canary previously reported, human rights activist and journalist Moosa Mohammed [Moosa Abd Ali] reached the building’s roof on the night of 26 July to protest Bahrain’s execution of two men. He dropped a banner that called on prime minister Boris Johnson to “ACT NOW!” and stop the killings. Video from witnesses on the ground captured what Mohammed claimed was an attack by embassy staff.

On 7 August, Channel 4 News published an interview with Mohammed. In it, he claimed that staff assaulted and attacked him in a number of ways:

The man who’s holding… a wood stick, he’s beating me and punched me… and he told me ‘we are going to throw you from here’…

They kick me in my body and also they took my t-shirt. And they put it under water, and they bring it to my face… to stop breathing. And they say ‘we will kill you here’.

Mohammed also said that staff made the threat “in Arabic”.

Channel 4 News pointed out that footage recorded by Mohammed’s colleagues from the ground appeared to show staff hitting Mohammed “with a wooden stick”. The Met ultimately decided to break through the front doors to end the situation, requesting help from the London Fire Brigade to do so.

The fact that the police ordered these embassy doors to be broken into is astonishing. International conventions bar a host nation from entering an embassy without the express permission of an ambassador, but that night was exceptional. Police clearly thought Moosa Mohammed’s life was in danger, and that justified forced entry.

The Canary contacted the Met, London Fire Brigade, and the Bahrain embassy for comment. At the time of publishing, only the Met had replied. Responding to a question about whether staff made threats to kill, it said:

The Met has not received any such allegations. Any such offences reported to us or brought to our attention would be investigated.

Regarding the decision to break through the embassy’s doors, the Met explained:

We entered the premises to save life and limb/prevent damage while dealing with a fast moving incident involving a demonstrator on the roof of the embassy.

They also confirmed that Mohammed is currently on bail until late August, having been arrested for trespass on diplomatic premises.

The embassy told Channel 4 News that Mohammed’s allegations are “completely unfounded and ridiculous”. It also said that staff “stepped in to restrain him for his own safety” after he threatened to jump off the roof. However, Bahrain Institute for Rights and Democracy (BIRD) claimed it had evidence that contradicts this statement.

There are echoes in this case of Jamal Khashoggi’s murder. Khashoggi, a journalist, was murdered in Turkey’s Saudi Arabian embassy on 2 October 2018. It’s widely believed, including by a UN special rapporteur, that crown prince Mohammed bin Salman and other high-level officials are liable for the murder.

Middle East Eye reported that Mohammed “feared” he would become “a second… Khashoggi, in London”. And it also quoted BIRD director Sayed Alwadaei’s criticism of the UK government’s response. He said that it should “end its complicity” with oppressive regimes in the Gulf, and that:

Less than a year after Khashoggi’s murder, Britain’s Gulf allies have faced no serious consequences and this brazen attack in the heart of central London displays their shameless disregard for international law and human life

PM Johnson hasn’t made a public statement about the alleged attacks on Mohammed or on Bahrain’s executions.