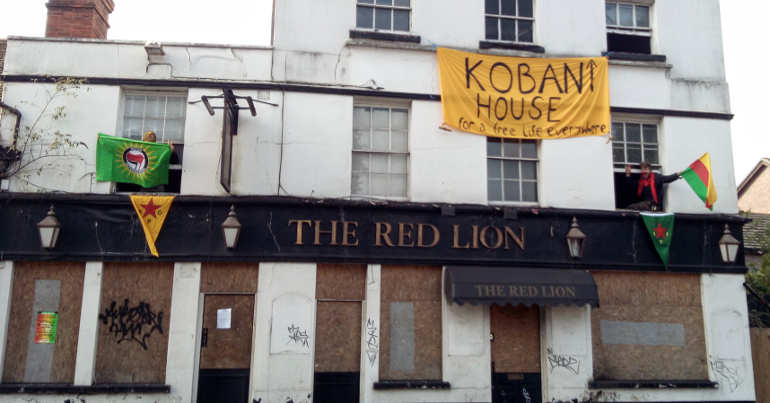 A group of people in Reading have occupied the empty Red Lion pub on Southampton Street to create a political space to honour the ‘heroic resistance’ against the Turkish invasion of northeast Syria (aka Rojava). The pub has been renamed Kobanî House, named after the Rojavan city of Kobanî.

Call for solidarity against alleged war crimes and ethnic cleansing

The occupation of the Red Lion has been timed to coincide with a day of global resistance planned for Saturday 2 November. Demonstrations are planned across the British Isles and all over the world.

As The Canary previously reported, Daesh (Isis/Isil) besieged the blockaded city of Kobanî in late 2014 as Turkey watched from across the border. But the city’s local defence forces resisted for longer than expected, eventually defeating Daesh. This got the world’s attention, and the city became an icon of Rojava’s resistance.

Statement from the Kobanî House occupiers

A statement received by The Canary from one of the occupiers said:

In solidarity with the Kurdish Freedom Movement, we decided to open this building to temporarily create an educational and social space for people to learn about the [Rojava] revolution. We have been tidying up and hope to make Kobanî House a welcoming place for anyone to visit. 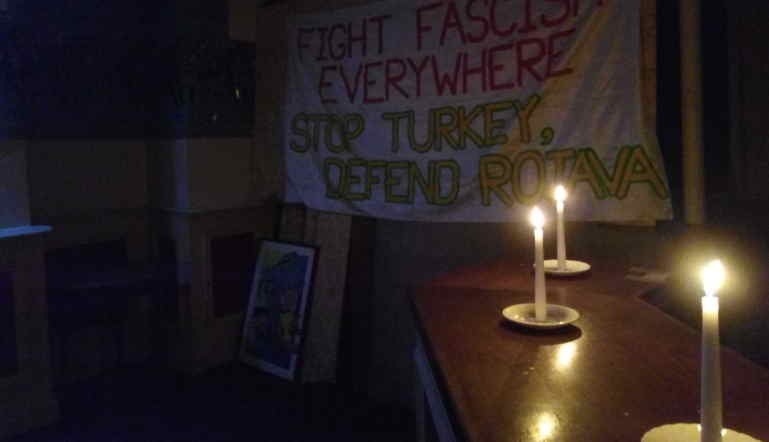 ‘European countries are funding this genocide’

Another statement from Kobanî House calls for increased international solidarity:

The recent invasion of Rojava by the fascist Turkish state has made the need for international solidarity even more crucial. European countries, especially the UK, France, and Germany, are funding this genocide by entering into multi-million-pound military trade deals with Turkey

[Turkey’s invasion] is a violation of international human rights. White phosphorous, an internationally banned chemical weapon, is being used against civilians across the region. Turkey is attempting to ethnically cleanse the area in a war against Kurds and other groups. The region of Rojava has been a beacon of hope internationally for democracy and women’s rights, with cooperative economy and neighbourhood councils forming the basis of social organisation.

Featured images via the Kobanî House occupiers (with permission)