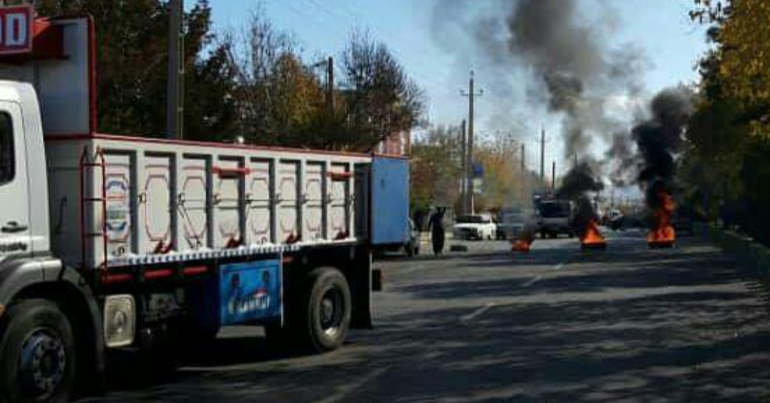 Protests are ongoing across Iran against a recent hike in fuel prices. They began on 15 November, after the Iranian government announced an end to fuel subsidies, which will lead to a significant increase in fuel prices.

The ANF Firat News Agency spoke in particular on 16 November about how the protests had spread to Iran’s Kurdish region:

Yesterday people in many Iranian cities took to the streets against the gasoline price increase. Now the protests spread from Tehran and Tabriz to East Kurdistan. Also the provinces Yazd, Gilan, Lorestan, Islamabad and the cities of Kermanshah, Sine, Ciwanro, Ilam Saqiz and Urmia in Rojhilat (East Kurdistan) are shaken by massive protests. The people erect barricades of burning car tires.

A video from ANF Firat shows protesters being attacked by police in Tabriz on 16 November.

Over a thousand protests reportedly took place on Sunday 17 November across Iran’s 31 provinces. Protests are still ongoing as of Monday 18 November. Schools have closed, and many students have joined the protests. Shopkeepers have also shut their shops in many cities as a gesture of support for the demonstrators. More than 100 banks and over 50 shops have been set on fire, and police vehicles destroyed.

Iran’s ‘supreme leader’ Ayatollah Ali Khamenei called the protesters “thugs”, and reportedly blamed the uprising on ‘counter revolutionaries and foreign enemies’. The government now seems to have responded by shutting down internet services across the country:

Police and security forces have allegedly used lethal force against demonstrators. According to ANF Firat:

Iranian regime forces attacked the demonstrators with live rounds of ammunition and as a result of the attacks a large number of people died. So far, at least 12 people have been killed and hundreds of people were injured. According to some sources, the number of dead is over 30. According to figures given by Iranian official sources, more than 1000 people have been detained during the three days [of] demonstrations.