As an antisemitism crisis threatens to engulf the Tory party, Laura Kuenssberg runs to the rescue - The Canary 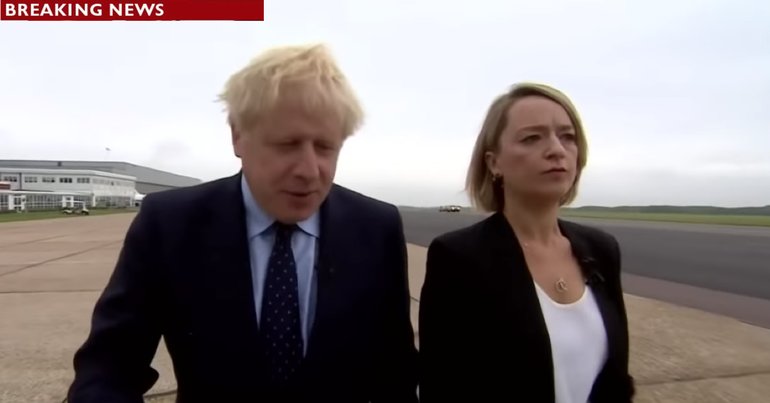 An antisemitism scandal has struck the Conservative Party, with two candidates facing accusations of alleged antisemitism. But instead of holding the party’s feet to the fire over its issues with racism, BBC political editor Laura Kuenssberg attacked Labour instead. It’s starting to feel like there’s no crisis big enough Kuenssberg won’t overlook in service of the Conservatives.

Scottish Conservatives have withdrawn support from Aberdeen North candidate Ryan Houghton. The decision comes after the discovery of historic social media comments by the candidate of a homophobic, Islamophobic, and antisemitic nature.

Houghton’s suspension came the same day the party’s Leeds North East candidate Amjad Bashir came under fire for alleged antisemitism too. How did Kuenssberg announce this shocking turn of events? Without even mentioning antisemitism, that’s how.

Bear in mind that Kuenssberg once facilitated the resignation of a centrist Labour MP on live TV, claiming newsworthiness as a defence against accusations of bias. Seriously, just hours before the Tory scandal broke, Kuenssberg thought it newsworthy to livetweet a single audience member heckling Corbyn over antisemitism:

First applause during Corbyn session here when audience member asks him to say why Labour is not 'for the many not the Jew' , confronting him on anti-semitism

Surely it must then be newsworthy that the Conservative Party has an antisemitism problem, right?

Kuenssberg announced Houghton’s suspension without even mentioning antisemitism. Worse, she used the same tweet to announce the entirely unrelated resignation of an unknown local Labour Party official in Leicester. And she only linked to the Labour story:

There is no connection or equivalence between these stories whatsoever. One is about a candidate for parliament being suspended for sharing extremist views, the other is a disgruntled local party official quitting over a local issue. So why combine the stories like this? To our knowledge, tweets are not currently being rationed.

Given Kuenssberg’s borderline obsessive behaviour around allegations of Labour antisemitism, we weren’t the only ones asking the question:

The Tory candidate was suspended over comments relating to the holocaust. The Labour councillor quit because he was unhappy with the outcome of a local selection.

The idea there is any equivalence is absurd.

I'm not sure why these two distinct and important stories needed to be combined in one tweet, especially if it means that only one gets linked to an article. https://t.co/gxDm4Xkjmg

Laura Kuenssberg here reporting on antisemitism in the Tory party with.. a story about someone leaving Labour because he thinks Len McCluskey is a trotskyite. If this is not unbalanced reporting and downplaying bad news stories for the Tories, what is?#PeterOborne #ToryRacism https://t.co/JnkU4cJQ30

Kuenssberg did not ask how Boris Johnson enabled this culture of antisemitism in the party. She did not speculate about the resignation or personally racist views of Johnson. And she did not spend the day taking comments from Johnson’s political opponents on the issue.

Antisemitism remains an issue in British society. But there is less antisemitism among Labour party supporters than among supporters of some other parties.

If the media’s concerns with antisemitism were based on genuine antiracism, these stories would be top news items. But they aren’t. Westminster pundits would also be challenging the Conservative Party’s refusal to hold an independent inquiry into its Islamophobia problem. But they aren’t. Their concern for racism seems to begin and end with weaponising it against political opponents.

Everyday, Muslims, Jews, Black people and other ethnic minorities face bigotry, abuse and violence. The overwhelming threat comes from a resurgent far-right. And instead of uniting with the left to defeat it, centrists and the right have united against the left, giving the far-right a virtual free ride. In normal times it would be unacceptable, but at time like this, it’s unforgivable.