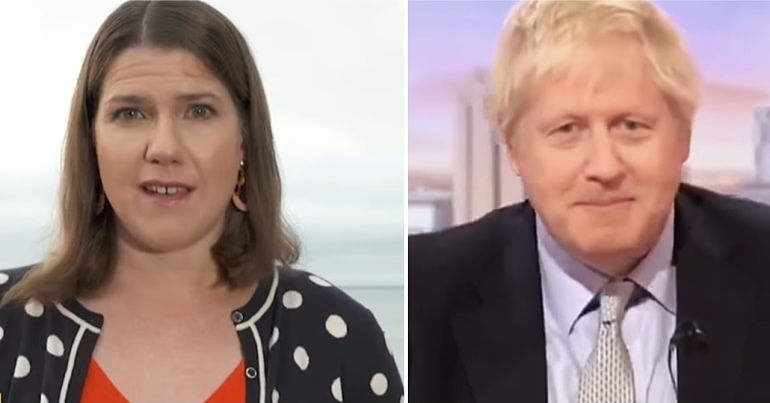 The Liberal Democrats present themselves as a progressive party of Remain. But their general election strategy can only result in another Boris Johnson-led Conservative government, delivering more austerity, climate breakdown, and a hard Brexit.

‘Unite to Remain’ – an Orwellian nightmare

The Lib Dems, Green Party, and Welsh nationalists Plaid Cymru have teamed up to form Unite to Remain, with the stated aim to stop Brexit:

The problem is this: if we continue to work along traditional party lines, we will split votes, allowing the ideological fringes of politics to win. We have a Prime Minister intent on taking the UK with a very poor and very hard Brexit deal.

But the coalition’s rhetoric is Orwellian. Because it’s precisely this strategy that risks splitting the progressive vote and delivering a Tory-led hard Brexit.

Just nine of Unite To Remain’s 60 target seats are seats the Lib Dems, Greens or Plaid Cymru hold. In these seats, the Remain alliance makes sense because it ensures none of these parties split the vote for the party currently holding the seat.

But, as Charley Allan writes in the Morning Star, it’s unlikely for any of these parties to win any of the other 51 seats.

In fact, in 35 of them we have a straight contest between Labour and the Conservatives. That means in 35 seats Unite to Remain only threatens to split the vote and deliver a Conservative government and hard Brexit.

Meanwhile, Labour is offering to end austerity, mass invest in clean energy, and offer a referendum on Brexit with Remain on the ballot.

Eight of these seats are literally Conservative versus Labour marginals. Take Finchley and Golders Green where former Labour right-winger Luciana Berger is standing for the Lib Dems.

This is a key Labour target seat. The party only needs another 1,658 votes to take it from the Conservatives. But the Greens are standing down and pushing the Lib Dem candidate, which only risks splitting the progressive vote and re-electing a Tory MP.

Or take Stroud, where Unite to Remain is standing Molly Scott, one of the Greens’ top players. As Allan points out in the Morning Star:

Labour leftwinger David Drew took the seat back from the Tories two years ago, winning almost 30,000 votes, but has a majority of just 687.

Yet the Greens, despite placing fourth in 2017 with a measly 1,423 votes, are targeting this seat hard and have a high-profile MEP as candidate.

Green members are reportedly quitting the party over the pact. But even Lib Dem parliamentary candidates have realised the absurd recklessness of this strategy. In fact, Lib Dem candidate Tim Walker stood down in Canterbury – one of the tightest marginals. Labour’s candidate holds the seat by just 187 votes. But the Lib Dem national leadership went right ahead and fielded another candidate anyway, even though four potential local candidates refused to stand.

The Canary contacted the Green Party and Unite to Remain but had received no response by the time of publication.

It’s not just through Unite to Remain that the Lib Dems could provoke a Johnson-led hard Brexit. Since the election kicked off, there have been warnings about a number of tactical voting websites that actually risk splitting the vote and delivering Conservative MPs.

The site Best for Britain recommends voting Lib Dem in 180 seats, even though the party only returned 12 MPs in 2017.

Vice has now revealed that Best for Britain chair Naomi Smith is a former Lib Dem parliamentary candidate. She stood for the party in Westminster in 2010, has been listed as a “Lib Dem speaker”, and tweeted about voting for “my party, the Lib Dems” in the 2019 Euro elections. Vice also points out that Best for Britain director Clive Cowdery is a Lib Dem donor.

Many of Best for Britain’s 180 target seats are straight up contests between Labour and the Conservatives, meaning the Lib Dems again risk splitting the vote and delivering Tory MPs.

It’s interesting that these accusations conveniently forget the chairman of Best for Britain was a minister under Gordon Brown. We are proudly cross-party.

Our data, and therefore recommendations, are in line with publicly available constituency polls.

We must rise above the tribalism of party politics and change the arithmetic in Parliament to stop Brexit. That’s the only way to do it and we will keep fighting to make that happen.

It’s long seemed clear that the Liberal Democrats are more concerned with stopping Corbyn than Brexit. But the Unite to Remain and Best for Britain outfits take this to a dangerous level. With the help of the Greens and Plaid Cymru, the Lib Dems appear to be exploiting the branding of Remain and tactical voting to undermine Labour in dozens of seats and key marginals. There is a clear risk this could return a Tory government. And that’s a disgrace.