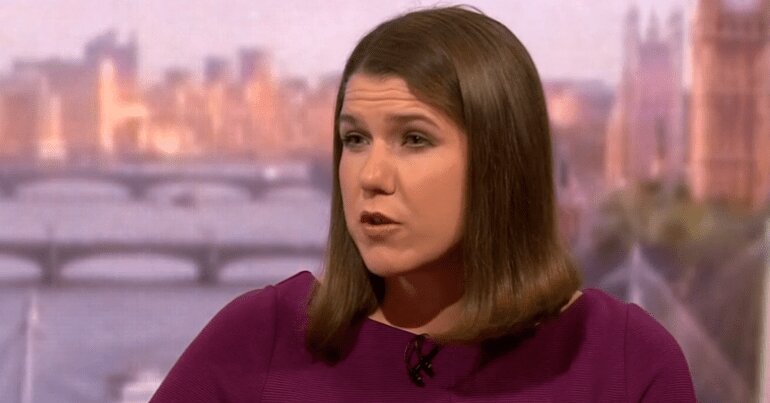 Liberal Democrat leader Jo Swinson hinted at a betrayal worse than tuition fees on the 15 September edition of the Andrew Marr Show.

Cashing in on Remain for votes?

Speaking to Marr, Swinson refused to rule out another coalition with the Conservative government, despite its hard-Brexit stance. The exchange will fuel suspicions that the Lib Dems’ support for Remain is predominantly an opportunistic vote-winning strategy.

She refuses to rule out a coalition with a pro-Brexit Tory government. pic.twitter.com/zYrAHx9elh

the result of the next election is the Conservatives lose their majority, but Labour are the largest party, and you are the next largest party. In those circumstances you have said you will never go into coalition with them. There’ll be no re-run of the rose garden scenes with Nick Clegg and David Cameron: you will not do a coalition again.

But, in response, Swinson dodged the question:

Boris Johnson and Jeremy Corbyn are not fit to be prime minister.

Later, Marr pressed her specifically on whether the Lib Dems would support a Labour government. And she said:

Jeremy Corbyn is not going to be put onto Number 10 with Liberal Democrat votes.

That suggests the Lib Dems would not even support a Labour government in a confidence and supply arrangement. But at the same time, they didn’t rule out backing the Conservatives in a formal coalition, instead saying:

I want to build an open and fair society, and they do not.

Given the Lib Dems have been hard-lining for Remain, that could spell a betrayal as bad as tuition fees.

In 2010, the Lib Dems literally signed pledges not to support an increase in university fees. But then the majority of Lib Dem MPs – including current leader Swinson and then-leader Clegg – voted through the increase in coalition with the Conservatives:

People have long suspected that the Lib Dems are predominantly hard-lining for Remain to win votes. As soon as Labour adamantly pledged to offer a second referendum if it wins an election, the Lib Dems pivoted to supporting outright revoking Article 50 (the Brexit process).

Beyond the rhetoric, the Lib Dems have only pushed the UK towards a no-deal Brexit. Other than Norman Lamb MP, the Lib Dems voted down Ken Clarke’s proposition for a soft-Brexit customs union compromise back in March. It lost by just three votes. If it had passed, that could have avoided a Johnson government and unified parliament on a soft-Brexit compromise that polling has shown 60% of the public support.

Nonetheless, the Lib Dems later backed Clarke as prime minister for the leader of a possible interim-government that would be committed to delivering a soft-Brexit. The Lib Dems flagship policy is supposed to be opposing Brexit, yet there’s no consistency.

On top of that, in July 2018, two of the Lib Dem’s most prominent MPs – Tim Farron and then-leader Vince Cable – both missed a crucial Brexit vote on a customs union, which the Tory government then won by just three votes. Farron later apologised.

The Lib Dems themselves also promised an EU referendum (in the event of further EU integration) in their 2015 manifesto and then voted Cameron’s proposal for the 2016 poll through parliament.

It looks like the Lib Dems could end up supporting the Conservatives in a coalition. That would be the ultimate continuation of their opportunistic pro-Remain posturing for votes. And it certainly wouldn’t be out of step with their previous betrayals on tuition fees and austerity.