Boris Johnson held a lavish party to sell our NHS, and used taxpayer money to pay for it - Canary 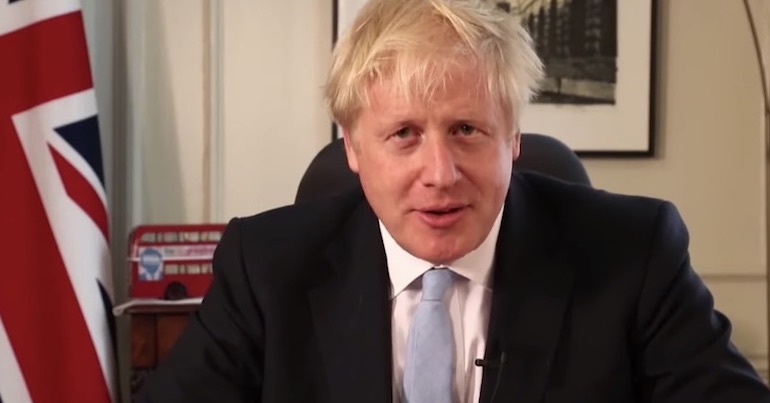 CORRECTION: The original article stated that Ipex Capital is a branch of the PA Consulting Group. In fact, Ipex was spun off from PA Consulting in 2008. The article was corrected to make that clear at 1.50pm on 21 November.

Boris Johnson blew taxpayers’ money to host a “lavish launch” for a US thinktank. The Initiative for Free Trade (IFT) wants US companies to compete with the NHS in post-Brexit trade deals.

In 2017, the Times reported that Johnson, then foreign secretary, was set to back the IFT launch. It also reported that the thinktank:

wants to work with ministers and businesses to dodge restrictions on negotiating deals before Britain withdraws from the EU in 2019.

In 2018, the Times also shared details of a joint report between the IFT and the US Cato Institute. The report calls for a “level playing field” between US and UK companies to compete for both goods and services. As the Times also noted:

Campaign group Led By Donkeys shared details of Johnson’s links with the group on Twitter. This revealed that Johnson used taxpayers’ money for a lavish event to launch the IFT:

As Led by Donkeys showed, using Freedom of Information (FOI) documents, Johnson waived the £6,000 fee for IFT to use the Foreign and Commonwealth Office for its 2017 launch. This meant taxpayer money funded the party. The move was clearly controversial, and Theresa May’s office questioned it:

Theresa May’s Downing St team questioned why it was being hosted by the Foreign Office. They knew it was controversial and were "worried we could come into some criticism for that" pic.twitter.com/SXfodUCAtV

Boris Johnson hosted the IFT's launch event at a cost of £6k to the taxpayer, against the advice of Sue Gray, the government's chief ethics watchdog pic.twitter.com/Cbhyd5HmfN

Daniel Hannan, who’s mentioned in the emails, is a Conservative MEP and the IFT president. In 2009, Hannan said that “he wouldn’t wish” the NHS “on anyone”. He’s got a long history of showing derision for the NHS. In 2012, he called it inferior to the US model and asked, “Why would any sane people cling to such a system?”

“I wouldn’t wish it [the NHS] on anyone” https://t.co/ImEPGfo7Nv
"Why would any sane people cling to such a system?"https://t.co/igh9K5ZJhS

In 2017, Hannan declared that he was being paid by Anthony Bamford, owner of JCB. Bamford is also one of Johnson’s major donors.

Johnson’s MP register of interests shows that donations from Bamford and JCB total £145,000 in 2019 alone. The Bamford family has an estimated wealth of £3.6bn. Since 2001, Electoral Commission records show the Bamfords and JCB have given “almost £10m in political donations”, primarily to the Conservative Party and groups “campaigning to leave” the EU. In June alone, these donations totalled £36,000.

As Led By Donkeys also revealed, Johnson’s “lavished praise on the IFT”:

A partial recording of his speech at the launch includes Johnson describing the IFT as “this crucial, crucial Institute for Free Trade.” 4m35s here: https://t.co/Y8Hi2yujSG

It doesn’t stop there…

The joint report mentioned by the Times was co-written by the IFT and the Cato Institute. This US thinktank was co-founded by Charles Koch, co-owner of Koch Industries. This is the:

every journalist, scientist and politician needs to know – that denial of climate change is not something based on healthy scientific scepticism and debate: it is manufactured and bears the “Koch” brand

And as if that weren’t enough to cast shade on Johnson’s links with IFT, Jon Moynihan, who sits on its executive board, is another huge Tory and Vote Leave funder. Moynihan is also chair of Ipex Capital, which was spun off from PA Consulting Group in 2008. In 2017, an FOI request by Campaign Against Arms Trade (CAAT) revealed that this company “held 15 passes” that allowed its staff access to Ministry of Defence (MoD) buildings. Brian Kingham, also on the executive board, is another major Tory funder.

Hands off our NHS

Given the amount some of these players have donated to the Tory party, perhaps £6,000 may not seem like much to Johnson. But the fact is, that’s taxpayers’ money. And the shady links behind the IFT show just how deep the web goes and how under threat our NHS might be if Johnson wins the election. We’ve got one chance to stop Johnson on 12 December, and for the sake of our NHS, it’s vital we do.