All Tory HQ could rely on during the leaders' debate was Johnson's lies, so it took propaganda to a new level - Canary 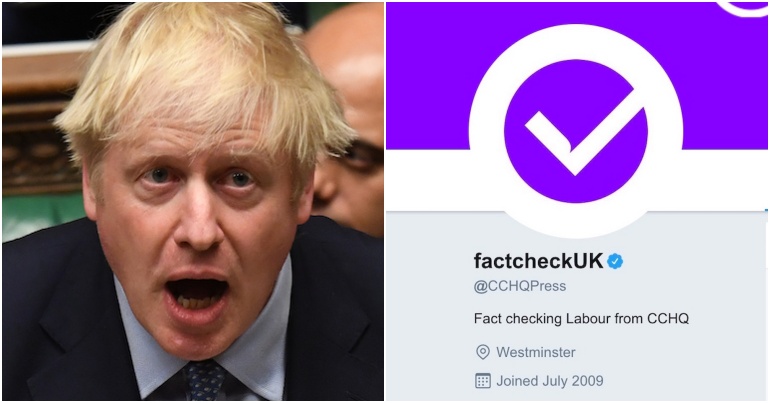 On 19 November, Jeremy Corbyn faced Boris Johnson in the first TV debate of this general election. While Corbyn remained clam and articulate throughout, Johnson was anything but. He flustered, blustered, and clearly only had one point to make about Brexit. So, perhaps sensing Johnson was losing, the Conservative press office rebranded itself on Twitter. As a bona fide fact-checking outlet. This didn’t go down well. But some responses were utterly brilliant.

During the debate, tweets sent out from the Conservative Campaign Headquarters press office (CCHQPress) appeared under the banner ‘factcheckUK’. As the debate continued, CCHQPress offered a series of ‘facts’ to over 76,000 followers. The Independent reported:

Among supposed “facts” represented on the account are claims that Boris Johnson has negotiated a “great new deal”, that he has “kept his promises on Brexit” – and that Jeremy Corbyn’s assertion there will be no deal between his party and the SNP is a “lie”.

It culminated with the declaration that Johnson ‘won’ the debate:

“Factcheckuk” has after careful deliberation over its own verdict, handed the win to its own leader… pic.twitter.com/eG2SqWsJl9

20 minutes after the debate ended, CCHQPress reversed the rebrand.

Genuine independent fact-checking sites swiftly stepped in, to flag what was going on:

It is inappropriate and misleading for the Conservative press office to rename their twitter account ‘factcheckUK’ during this debate. Please do not mistake it for an independent fact checking service such as @FullFact, @FactCheck or @FactCheckNI

Not surprisingly, people were disgusted by what CCHQ did:

WHOA the CCHQ Press Office Twitter rebranding itself “factcheckUK” for the night is some pretty dystopian shit. pic.twitter.com/kxamS9ge2x

#FactCheckUK is direct proof of what we already knew: that the Tories run on the principle that the end justifies the means. In this case, a torrent of propaganda, lies, corruption, bribery, and collusion with foreign powers. The end? To save the Tory party. No matter what.

The Tory fake #FactCheckuk fraud shows they've gone into full Donald Trump style lie, lie, lie mode and they don't even care when they're caught out. Democracy can't function like this. People who value honesty need to combine to get the Tories out and bring back some sanity. pic.twitter.com/mLeuh8ZuEB

Not least because in 2018, the electoral commission insisted all online campaigns must have transparency:

If you are angered by #FactCheckUK the real villain in the piece is the Conservative *government* which has not implemented the Electoral Commission's June 2018 recommendation to make it a legal requirement to make it clear who is behind an online campaign https://t.co/dMfmacdk2Q pic.twitter.com/kfIQbol11w

The added twist to this story is that Johnson was asked to answer questions about his own honesty and integrity during the debate:

During a debate where Johnson is directly challenged about his honesty the Conservative press office rebrands their Twitter account to appear as an impartial fact checker.

Disgrace. I understand people having conservative views, but you can't support these crooks!#factcheckUk pic.twitter.com/h9e3VvCnO9

Despite the dystopian nature of the Tory propaganda, its rebranding effort also created moments of genius. Other Twitter users stepped in to play the game which showed the stunt up for what it truly was. A series of copycat factcheckUK rebrands appeared from people like Black Mirror creator Charlie Brooker:

We have always been at war with Eastasia.

But it was perhaps Ralf Little who won the internet. He started posting as the “Conservative Press Orifice”:

Fact check. Boris Johnson is not telling the truth in this debate.

You’re just a bunch of pussies. If you had any balls you would have done it. We rock. Food banks are ace. https://t.co/6QdTuSle29

But the following day, it seemed Twitter had started suspending accounts for some of the parody factcheckUK rebranders:

I pretended to be Fact Check UK for a few hours last night for a laugh and was locked out of my account and reported for impersonation. Guessing @CCHQPress had similar issues… Nah? Nope. Nothing has consequences anymore? Cool. pic.twitter.com/CMMDmVpuNF

And yet, so far no action has been taken against the key perpetrators, who, let’s not forget, represent an official political party. Certainly, the electoral commission claims to “not have a role in regulating” stunts like this:

Our statement on @CCHQPress Twitter rebrand during the #ITVDebate: https://t.co/IDiT3rQ4wL pic.twitter.com/WPy2G2oj3a

And yet a bigger irony still is that the government recently issued a warning to watch carefully for disinformation:

Disinformation isn’t always easy to spot. Make sure you know what to look for. Use the SHARE checklist. Don't feed the Beast.

During this debate, the Tories took the power of propaganda to an entirely new level. We’ve entered the world of dystopia, and, as George Orwell wrote: “Doublethink means the power of holding two contradictory beliefs in one’s mind simultaneously, and accepting both of them”. There’s no doubt now that Johnson’s constant lies have changed the face of UK politics, and the establishment’s prepared to enable rather than challenge this.

What does stand out over and above everything else in this, though, is Corbyn’s integrity and honesty. And that’s what we have to vote for on 12 December.