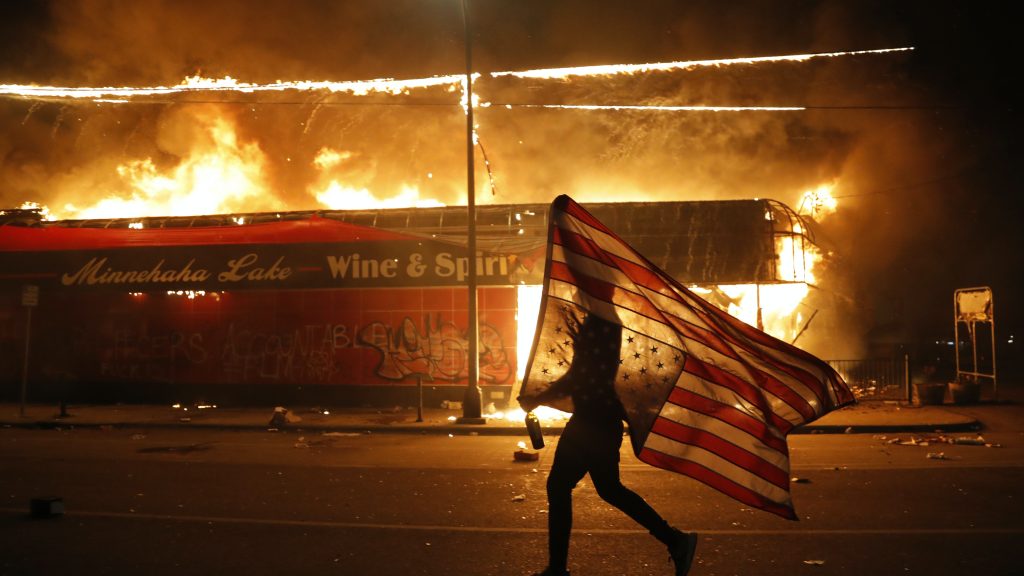 Demonstrators have torched a Minneapolis police station as three days of protests spread over the death of George Floyd, a handcuffed black man who pleaded for air as a white police officer knelt on his neck.

Protests first erupted on Tuesday, a day after Floyd’s death in a confrontation with police which was captured on a widely seen video.

On the footage, Floyd can be seen pleading as Officer Derek Chauvin presses his knee against him.

As minutes pass, Floyd slowly stops talking and moving. The 3rd Precinct covers the portion of south Minneapolis where Mr Floyd was arrested.

A city police spokesman confirmed that staff had evacuated the 3rd Precinct station, the focus of many of the protests, “in the interest of the safety of our personnel”.

Live-streamed video showed the protesters then entering the building, where fire alarms blared and sprinklers ran as fires were started.

Protesters could be seen setting fire to a Minneapolis Police Department jacket.

US president Donald Trump later blasted the “total lack of leadership” in Minneapolis.

He wrote on Twitter: “Just spoke to Governor Tim Walz and told him that the Military is with him all the way. Any difficulty and we will assume control but, when the looting starts, the shooting starts.”

A visibly tired and frustrated Minneapolis mayor Jacob Frey made his first public appearance of the night at City Hall at around 2am and took responsibility for evacuating the precinct, saying it had become too dangerous for officers.

Then he added: “There is a lot of pain and anger right now in our city. I understand that … What we have seen over the past several hours and past couple of nights here in terms of looting is unacceptable.”

The mayor defended the city’s lack of engagement with looters – with only a handful of arrests across the first two nights of violence – and said: “We are doing absolutely everything that we can to keep the peace.”

Minnesota governor Tim Walz earlier activated the US National Guard at the Minneapolis mayor’s request, but it was not immediately clear when and where the Guard was being deployed, and none could be seen during protests in Minneapolis or neighbouring St Paul.

The Guard tweeted minutes after the precinct burned that it had activated more than 500 soldiers across the metro area.

The National Guard said a “key objective” was to make sure fire departments could respond to calls, and said in a follow-up tweet it was “here with the Minneapolis Fire Department” to assist.

But no move was made to put out the 3rd Precinct fire. Assistant Fire Chief Bryan Tyner said fire crews could not safely respond to fires at the precinct station and some surrounding buildings.

Earlier on Thursday, dozens of businesses across the Twin Cities boarded up their windows and doors in an effort to prevent looting, with Minneapolis-based Target announcing it was temporarily closing two dozen area stores.

Minneapolis shut down nearly its entire light-rail system and all bus service through until Sunday out of safety concerns.

The US attorney’s office and the FBI in Minneapolis said they are conducting “a robust criminal investigation” into the death.

The FBI is also investigating whether Mr Floyd’s civil rights were violated.

Chauvin, the officer who knelt on Floyd’s neck, was sacked along with three other officers involved in the arrest.

The next day, the mayor called for Chauvin to be criminally charged.