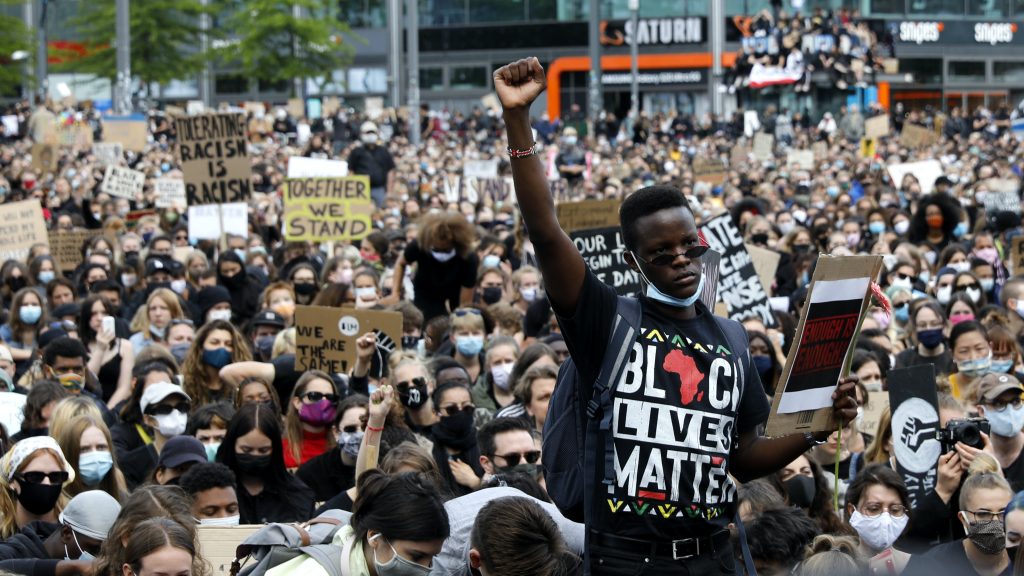 Thousands of people have rallied in Europe and Australia to honour George Floyd and to voice support for the Black Lives Matter movement.

The worldwide wave of solidarity following the killing of Floyd in Minneapolis also served to highlight racial discrimination outside the United States.

In Paris, demonstrators tried to gather in front of the US Embassy, defying restrictions imposed by authorities because of the coronavirus pandemic.

They were met by riot police and French security forces sealed off the embassy behind an imposing ring of metal barriers and roadblocks.

“You can fine me 10,000 or 20,000 times, the revolt will happen anyway,” Egountchi Behanzin, a founder of the Black African Defence League, told officers who stopped him to check his ID documents before he got close to the diplomatic building. “It is because of you that we are here.”

In Sydney, protesters won a last-minute appeal against a ruling declaring their rally was unauthorised.

The New South Wales Court of Appeal gave the green light just 12 minutes before the rally was scheduled to start, meaning those taking part could not be arrested.

Up to 1,000 protesters had already gathered in the Town Hall area of Sydney ahead of the decision.

Floyd, a Black man, died in handcuffs on 25 May while a Minneapolis police officer pressed a knee on his neck even after he pleaded for air and stopped moving.

His death has struck a chord with communities protesting against discrimination elsewhere, including the deaths of indigenous Australians in custody.

In Brisbane, the Queensland state capital, organisers said about 30,000 people gathered, forcing police to shut down some major streets. The protesters demanded to have Australia’s Indigenous flag raised at the police station.

She said: “Whether you’re talking about the US or right here in Australia, black lives matter.

Indigenous Australians make up 2% of the the country’s adult population, but 27% of the prison population.

They are also the most disadvantaged ethnic minority in Australia and have higher-than-average rates of infant mortality and poor health, as well as shorter life expectancies and lower levels of education and employment than other Australians.

Wearing masks and black shirts, dozens of demonstrators marched through a commercial district amid a police escort, carrying signs such as “George Floyd Rest in Peace” and “Koreans for Black Lives Matter”.

In Tokyo, dozens of people gathered in a peaceful protest.

In Berlin, thousands of mostly young people, many dressed in black and wearing face masks, joined a Black Lives Matter demo in the Alexanderplatz, or Alexander Square, on Saturday.

Some held up placards with slogans such as “Be the change”, “I can’t breathe” and “Germany is not innocent”.