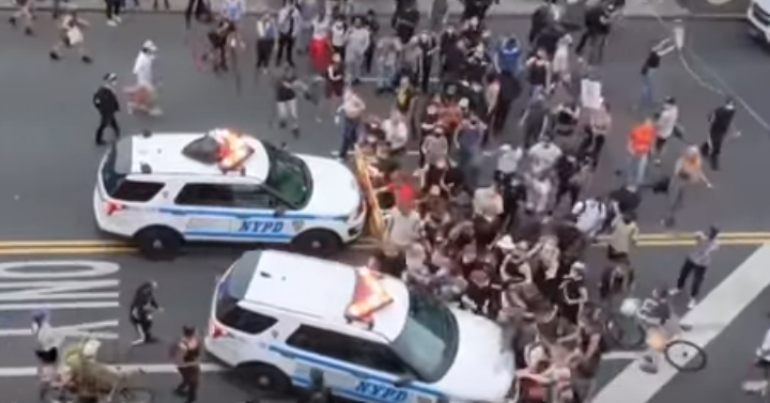 Across the US, Black Lives Matter protesters are under violent attack by the police and the national guard. Far-right white supremacists are also visible. But people can only take so much, and if attacked, protesters have a moral right to defend themselves.

The assaults on protesters by police and the national guard have been widespread.

For example, in Chicago:

Has nobody in charge of US police realised that everyone has mobile phones and that their violence against protesters will be filmed and sent around the globe? Each mindless attack on peaceful protesters adds fuel to the flames. USA is sick. https://t.co/GlpIEDja9e

In Louisville, police shot at cars:

To see how the police are inciting & starting violence with protesters in the USA follow this guy https://t.co/NSkr1qtoHm

In a Minneapolis suburb, national guards in Humvees fired rubber bullets at residents in their homes:

This from #Minneapolis City suburb, Nat. Guard Humvee leads off, then pedantic Storm Trooper thugs start firing rubber bullets at resident who are standing on their porches. Ladies and Gentlemen, this is not a 'race' issue, it's a Fascist #PoliceState issue. Incredible… #Riots pic.twitter.com/vxEpeJ2Sx3

In Buffalo, New York, police callously knocked down an elderly gentleman who could easily have died:

New Tonight: Disturbing video from @WBFO in Buffalo, NY shows an elderly man walk up to police in riot gear. An officer shoves the man…he falls backwards, hits his head…starts bleeding immediately…motionless.
Why did this happen @BPDAlerts ?
pic.twitter.com/qbTvXAAPLH

All across the USA

All across the US, police let loose:

the usa is a democracy
saudi arabia is a totalitarian state

how are the media blaming violence on protesters with evidence like this? https://t.co/MTc6MhQ1Dy

On 5 June, police officers with batons confronted a small group of Black Lives Matter protesters and viciously assaulted them. A police inspector was subsequently charged with aggravated assault.

The day before, a group of men in riot gear appeared near the White House in a ‘uniform’ but without identification badges, insignia, or name tags. Their presence presumably was to intimidate Black Lives Matter protesters:

Completely unmarked officers in riot gear holding protesters blocks away from the White House. No badges. No insignias. No name tags. Nothing. Refused to tell us who they’re with. #DCprotest #DCprotests pic.twitter.com/c4lFFCsX48

There are also well-established far-right militias, such as the Boogaloo Bois, who appear to be exploiting the crisis. Three men associated with the Boogaloo Bois were arrested earlier this month in Las Vegas, accused of conspiring to incite violence. In particular, conspiracy to “damage and destroy by fire and explosive, and possession of unregistered firearms”. The three had been on their way to a George Floyd protest while possessing Molotov cocktails.

According to the Southern Poverty Law Centre (SPLC), the Boogaloo started as a meme that:

emerged concurrently in antigovernment and white power online spaces in the early 2010s. In both of these communities, “boogaloo” was frequently associated with racist violence and, in many cases, was an explicit call for race war. Today the term is regularly deployed by white nationalists and neo-Nazis who want to see society descend into chaos so that they can come to power and build a new fascist state.

posters use terms such as “the day of the rope world revolution boogaloo,” a reference to a day when “race traitors” are lynched in the racist novel “The Turner Diaries.”

There was also a report that Identity Evropa (IE), a US-based white nationalist group, had created a fake Antifa (anti-fascist) group and called for violence. In a tweet, later removed by Twitter, the group, posting as @ANTIFA_US, tweeted:

Tonight’s the night, Comrades… Tonight we say ‘F— The City’ and we move into the residential areas… the white hoods…. and we take what’s ours …”

Meanwhile, SPLC has identified more than 500 far-right so-called ‘anti-government’ groups across the US, of which just under 200 can be described as militias.

The demonstrations in the US and elsewhere are not just about the horrific murder of George Floyd, but about wider inequalities and failure of governments.

We should have stopped this long ago. Charlottesville is the wake-up call to progressives everywhere. …

If someone is waging a culture war against you, at some point you have to fight back.

This is how the fight back is done in Greece:

And for inspiration closer to home, Americans need look no further than the Zapatista revolution in Chiapas, Mexico, where thousands now live peacefully, without government, politicians, or big business.

People don’t have to accept being attacked by police or their allies as the norm. And if the law cannot or will not protect them, then they have a moral right to defend themselves.