Bosnia is marking the 25th anniversary of the Srebrenica massacre, the only crime in Europe since the Second World War that has formally been declared a genocide.

The brutal execution in July 1995 of more than 8,000 Bosniak Muslim men and boys is being commemorated in a series of events. These include the reburial of recently identified remains of nine victims in a memorial cemetery just outside Srebrenica. 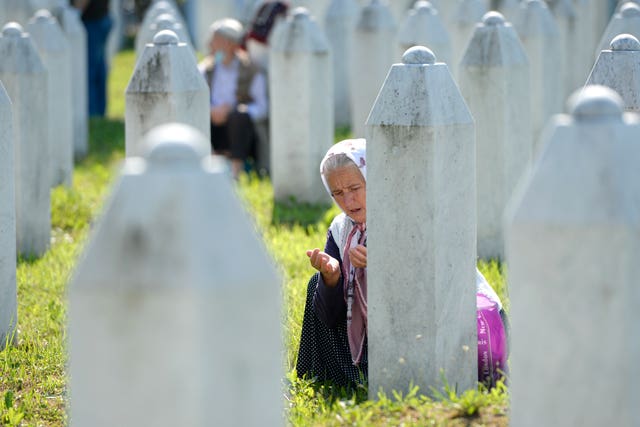 A woman prays in Potocari, near Srebrenica (Kemal Softic/AP)

The Srebrenica massacre is the only episode of Bosnia’s 1992-95 war to be formally recognised as genocide, including by two UN courts.

After murdering thousands of Srebrenica’s Muslims, in an attempt to hide the crime, Serbs dumped their bodies in numerous mass graves scattered throughout eastern Bosnia.

Body parts are still being found in mass graves and are being identified through DNA analysis. Close to 7,000 of those killed have already been found and identified.

Newly identified victims are buried each year on 11 July – the anniversary of the day the killing began in 1995 – in the memorial cemetery outside of the town in eastern Bosnia.

Commemorating during a pandemic

Typically, thousands of visitors from various countries attend the commemoration service and funeral. But this year only a relatively small number of survivors were allowed at the cemetery due to the coronavirus pandemic.

Dozens of world leaders have sent video messages to be played at the ceremony. They include Canadian prime minister Justin Trudeau, Spain’s Pedro Sanchez, US secretary of state Mike Pompeo, and the Prince of Wales