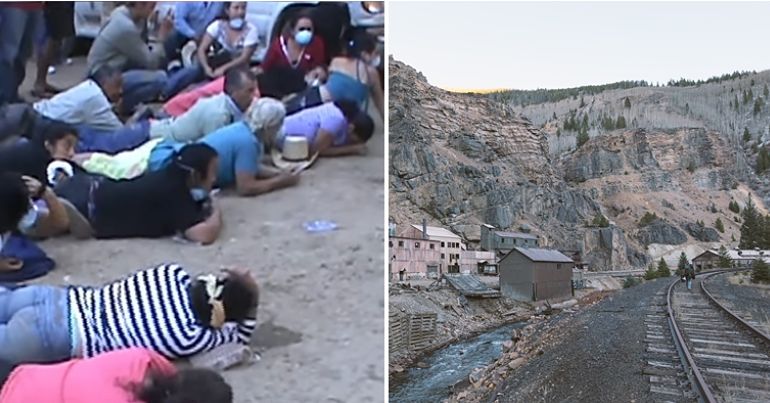 As coronavirus (Covid-19) cases around the globe surge and the equivalent of 400m full-time jobs disappear, the mining industry is still amassing wealth. On 6 July, mining news website Mining.Com reported the industry’s top 50 companies added $249.5bn to their value during the second quarter (April-June) of 2020. This was despite their market value being lower at the end of June than in January.

The website credits the upsurge in market value to the surge in the price of gold, silver and iron ore and the “late recovery in the copper market”. But this surge comes at a time when a report into mining industry behaviour during the pandemic revealed disturbing trends. These trends demonstrate an attempt to silence anti-mining dissent and to weaken environmental regulation. But with effective international community resistance, these trends need not become the norm.

According to the mining website, the top 50 companies had a combined market value of “$957 billion at the end of June”. The price of gold is also soaring as investors seek a “safe-haven” amidst the uncertainty of the global economy. These prices are “within shouting distance of 2011’s record high”.

And if certain trends identified by community campaigners are fully realised, this wealth could soar even higher.

According to the Voices from the Ground report published in June 2020:

The mining industry is one of the most polluting, deadly, and destructive industries in the world. Yet to date, mining company responses to the COVID-19 pandemic have received little public scrutiny compared to other industries seeking to profit from this crisis.

This “snapshot report” illustrates four trends immediately threatening the health and safety of people fighting the destruction that mining extraction causes. It also highlights the threats to the safety of people working in the mining industry. These trends are:

Corporations and governments are putting their workers and communities around the world at great risk by pushing to categorise mining as an “essential service”. This allowed work to continue during a pandemic and meant these companies have helped spread the virus among workers. And the Indigenous and rural communities within which some of these companies operate were already at risk.

In April 2020, deaths from respiratory illnesses were 200% higher than April 2019, in the Brazilian mining town of Parauapebas. And in Ecuador, mining companies were exempt from the lockdown restrictions that the rest of the population were subject to.

What’s worse, severe and even militarised restriction imposed by governments during the pandemic has affected people’s ability to defend themselves. Some land defenders have been the victims of targeted violence and face obstacles in accessing the justice system.

Since the outbreak of the virus in Colombia on 6 March, one organisation has documented the deaths of 36 human rights defenders. In Honduras, communities against mining have faced harassment from the police and military.

Some companies have attempted to hide their track record by providing much needed PPE gear or by making donations to government departments. In Australia, the company Newcrest Mining donated $1m to the University of Queensland to help develop a coronavirus vaccine.

While in Guatamela, Pan American Silver handed out food supplies while collecting signatures from people that could undermine the ongoing consultation process on a silver mine in the Indigenous Xinka region. The signatures were meant to demonstrate support for the mine.

These companies are using the pandemic climate to “weaken the already-limited measures which do exist to address the social, cultural, environmental, and economic impacts of their activities”.

For instance, the Chilean government approved the environmental licence of a Canadian mining company in the community of Putaendo. This community had declared their territory “free of mining”. But the government still used military repression to quash the protests.

But despite the power of mining companies and governments, there’s international resistance to their efforts. They’re fighting to reverse these trends and they’re getting organised. They reject the claim that mining is an ‘essential service’. Instead they believe in prioritising the health of their communities over the profits of these corporations.

To achieve this, they are calling on all governments “to respect and support the autonomous organizing and self-determining processes of mining-affected communities and Indigenous peoples”. They also call on:

And to this end, they stand together in solidarity.

These mining companies are driven by profit, not the health of their workers nor the communities they disrupt. But the collective approaches of communities and people affected by mining offer a realistic form of resistance, and a way to a healthier future.