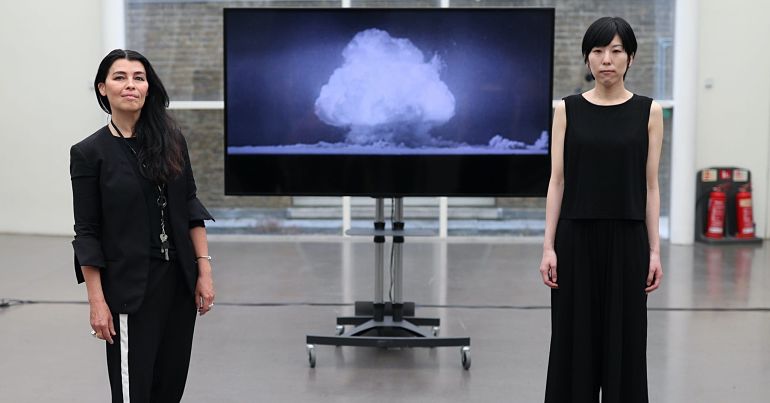 Two London-based artists explore the bombings of Hiroshima and Nagasaki in new perspectives, including in the context of climate change and racism, with their digital artwork.

I Saw The World End, by Es Devlin and Machiko Weston, reflects on the impact of the events from the points of view of the British artist and Japanese designer.

The 10-minute video includes script from letters written by Albert Einstein and J Robert Oppenheimer during the Second World War, as well as first-hand testimonies from the survivors of the bombings.

The United States detonated two nuclear weapons over the Japanese cities on 6 and 9 August, 1945.

The two bombings killed more than 100,000 people instantly, most of whom were civilians, and caused thousands more to die of their injuries or the after-effects of radiation.

The text in the artwork, half of which is read by Devlin in English, also traces the origin of the atomic bomb in HG Wells’s book The World Set Free, written in 1914.

Through these letters, award-winning stage designer Devlin, who has worked with Beyonce and Kanye West, said the artwork reflects the “hubris of humanity” and a contemporary audience would find comparisons in climate change and racism.

In the video, Devlin reads a letter by American psychiatrist Robert Jay Lifton in which he described nuclear weapons and climate as “apocalyptic twins” because the two threats “can destroy the human species”.

Devlin said the letters by then US president Harry Truman showed how the life of Japan was treated as that of the “other”.

She told PA news agency: “It (the bombings) was not a racist act, but we do think it’s a perspective that hasn’t been explored.”

Weston added: “I think one of the big reasons why this event (the Hiroshima bombing) happened was the people who made the decision somehow did not manage to see the people on the other side.

“This work brings those two things together. The key in so much of life is seeing through the eyes of others.”

Japan surrendered on 15 August, 1945, bringing an end to the Second World War.

The digital artwork has been commissioned by the Imperial War Museum London (IWM) to mark the 75th anniversary of the bombings of Hiroshima and Nagasaki this week.