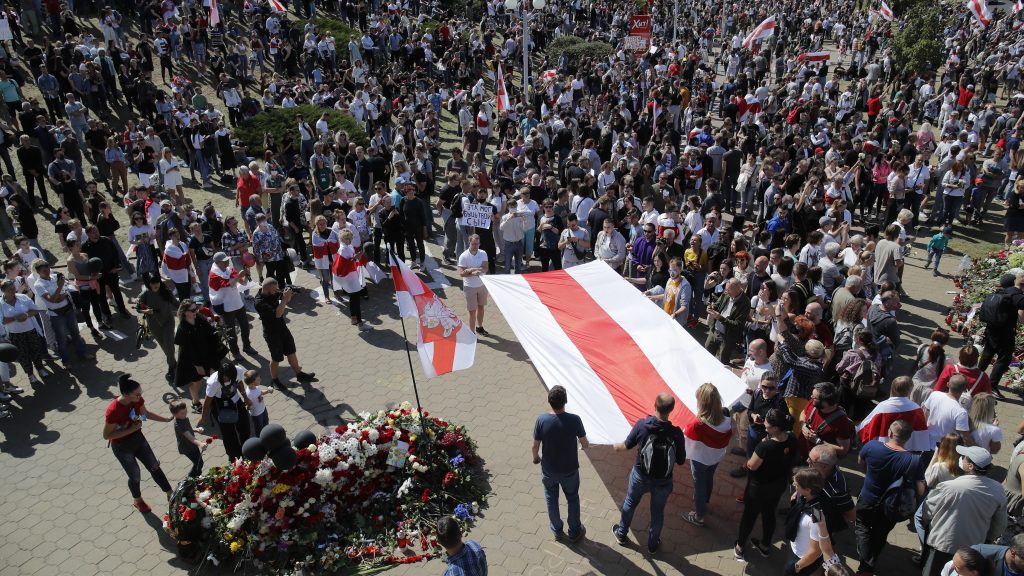 Thousands of demonstrators in Belarus gathered at the spot in the capital where a protester died in clashes with police, calling for authoritarian president Alexander Lukashenko to resign after 26 years in power.

It was the seventh consecutive day of large protests against the results of the 9 August presidential election, in which election officials say Lukashenko won a sixth term in office. Opposition supporters believe the figures have been manipulated.

Despite harsh police action against the protesters, including the detention of some 7,000 people, the demonstrations have swelled into the largest and most sustained protest wave since Lukashenko took power in 1994.

Lukashenko and Russian president Vladimir Putin discussed the protests in a call on Saturday 15 August, the first publicly known direct contact between the two leaders since the election.

A Kremlin statement said Putin and Lukashenko both expressed hope for a quick resolution of the tensions. The Kremin said:

It is important that these problems are not used by destructive forces aimed at causing injury to the cooperation of the two countries in the framework of the union state.

Russia and Belarus reached an agreement in 1997 about closer ties between the neighbouring ex-Soviet countries in a union that stopped short of a full merger. Although this has collided with recent disputes between the countries and Lukashenko’s suspicions that Putin’s government wants to absorb Belarus.

A funeral was held on 15 August for Alexander Taraikovsky, a 34-year-old protester who died on Monday 10 August in the capital of Minsk under disputed circumstances. Belarus police said he died when an explosive device he intended to throw at police blew up in his hand.

But his partner, Elena German, said that when she saw his body in a mortuary on 14 August, his hands showed no damage and he had a perforation in his chest that she believes is a bullet wound.

About 5,000 demonstrators gathered on 15 August in the area where Taraikovsky died. They laid a mass of flowers in tribute, piling into a mound about 1.5 metres tall, as passing cars blared their horns.

It’s awful to live in a country where you can be killed at a peaceful protest.

I will leave, if power isn’t changed

The brutal suppression of protests in Belarus has drawn harsh criticism.

European Union foreign ministers said on 14 August that they rejected the election results in Belarus. They’ve begun drawing up a list of officials in Belarus who could face sanctions over their role in the crackdown.

On 15 August, at a news conference in Warsaw with his Polish counterpart, US secretary of state Mike Pompeo said:

We’ve said the elections themselves (in Belarus) weren’t free.

I’ve spent the last days consulting with our European partners.

Our common objective is to support the Belarusian people.

These people are demanding the same things that every human being wants.