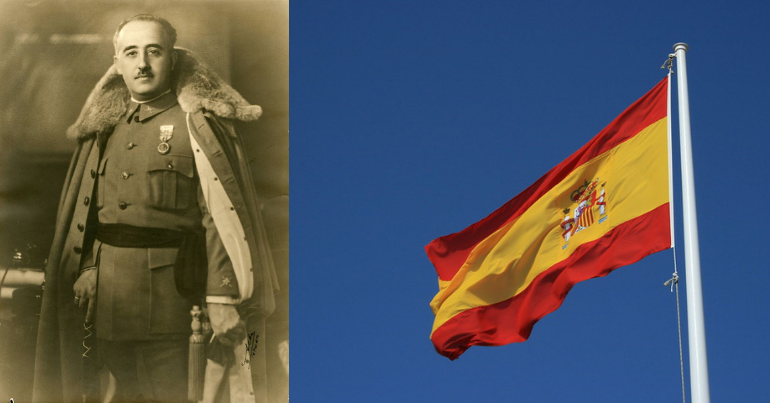 Former Spanish military officers who previously defended Franco have warned of the “deterioration of democracy” in Spain.

This comes just days after a leaked WhatsApp chat showed retired officers praising Franco and discussing the shooting of millions of supporters of Catalan independence.

As the country marked 42 years of a constitution that freed it from dictatorship, “271 former military personnel” signed a manifesto in opposition to Spain’s socialist coalition government.

The manifesto complained that Catalan independence supporters threatened the unity of Spain.

The shadow of Franco

Several of the manifesto’s signatories had previously signed a letter in defence of Franco, Spain’s former dictator. Among them was Juan Chicharro Ortega, president of the Francisco Franco National Foundation.

Franco presided over Spain from 1939 to 1975. Historians have estimated hundreds of thousands were killed as a result of the Spanish civil war and his regime.

The Franco Foundation opposed the government moving Franco’s remains from the Valley of the Fallen in 2019, where far-right supporters often gathered to mark the anniversary of his death.

In September, the Spanish government announced it was attempting to ban the Franco Foundation with the ‘democratic memory’ bill.

We will ban and make illegal the foundations that defend the Francoist dictatorship, like, for instance, the Francisco Franco foundation.

In the chat, one officer suggested “shooting 26 million” to stop the Catalan independence campaign. Members of the group also praised Franco, calling him “the Irreplaceable”.

Spain’s far-right party Vox has identified itself with the ex-military members.

Some of the group members involved had previously signed a letter to King Felipe VI in November to criticise the government.

What a few retired gentlemen might say in a chat group after too many drinks does not pose any kind of threat.

If a few pro-Franco men think that they are doing the head of state a favor by surrounding him with Francoism, I think they fail to understand that what it’s really doing is making more Spaniards feel republican.

Sánchez was first elected prime minister of Spain in 2018. He is the leader of the Socialist Workers’ Party. Sánchez’s government has been marked by political instability since then, as disagreements continued in parliament over regional independence campaigns.

In 2020, after the November 2019 election, Sánchez’s party formed a coalition with Unidas Podemos. Unidas Podemos, led by Pablo Iglesias, is an anti-austerity left-wing alliance. A key factor in the coalition’s victory was Catalan’s pro-independence party agreeing to abstain after Sánchez promised to find a solution to the independence campaign.

Spanish lawmakers rejected a no-confidence motion led by the far-right Vox party in October. Members of the conservative opposition also voted against the motion.

The coalition government has shown its opposition to pro-Franco rhetoric through the exhumation of his remains and attempts to ban defensive foundations.

This decision marks an end to the moral insult that the public glorification of a dictator constitutes. We are taking another step towards the reconciliation that can only exist in the democracy and the freedom we all share.