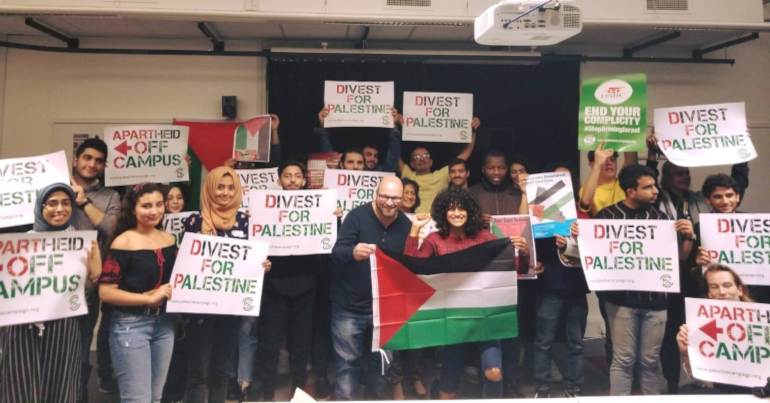 Students and staff at universities around the UK are calling on their institutions not to adopt what they see as a “discredited definition” of antisemitism.

Conservative education secretary Gavin Williamson is reportedly trying to force universities to sign up to the International Holocaust Remembrance Alliance (IHRA) working definition of antisemitism by the end of the year, or face funding cuts. But student opponents of the colonisation of Palestine are worried that it will silence criticism of Israel.

The UK government has already signed up to IHRA’s definition. But a legal expert has said that this does not oblige public institutions to follow suit. Students at Sheffield Hallam University (SHU) have called the IHRA definition “faulty” and their Palestine society has said:

according to Geoffrey Robertson, a renowned legal expert who advised the Palestinian Return Centre, the UK government’s wrongdoing in adopting the definition does not obligate public institutions to adopt or interact with it, given its threat to free speech which universities are legally obliged to uphold.

Being rushed towards accepting a ‘faulty framing’ of antisemitism

The SHU Palestine society is concerned that their university is in danger of being forced to rush into adopting the whole IHRA definition without proper debate. According to a statement sent to The Canary from the SHU Palestine Society:

We were approached by members of SHU community, including [University and College Union] UCU members and [Student Union] SU representatives, who are concerned that, despite its non-legally binding status, the IHRA definition will not be subjected to thorough critical scrutiny for its “faulty” framing and “dangerous” repercussions

We are deeply worried that Sheffield Hallam University may already have fallen victim to the chilling political attempts to conflate legitimate opposition to Israel and Zionism with the gruesome crime of antisemitism.

What’s wrong with the IHRA definition?

According to the statement from SHU Palestine Society:

The two most important and inherently problematic examples of antisemitism advanced by the IHRA are:

This is a legitimate matter for debate, given the mounting evidence of Israel’s systematic apartheid practices against the Palestinians; its existence built on the ethnic cleansing of the Palestinians since 1948; its denial of the refugees’ internationally-recognised Right of Return; the ever-expanding illegal settlements on Palestinian lands; the illegal construction and consolidation of the Segregation Wall; the continued subjugation of the Palestinians under siege and colonial occupation, and the structural discrimination against Palestinian citizens of Israel who comprise 20% of its population.

Crucially, other liberal democracies do not claim supremacy for one particular ethno-religious or racial group. Israel’s Jewish supremacy over the indigenous people of Palestine, however, has been enshrined in its 2018 nation-state law, which defines Israel as “the national home of the Jewish people”.

The IHRA definition is strongly opposed by many Jewish people. This includes Andrew Feinstein, whose family survived the holocaust. According to the statement from SHU Palestine Society:

Our most dedicated supporters whom we have had the honour of hosting at SHU include Andrew Feinstein, an anti-apartheid Jewish activist and a former Member of Parliament for the African National Congress under Nelson Mandela’s leadership. Feinstein has been on the frontline of fighting antisemitism from South Africa to the UK, his current residence, and is also a vocal opponent of the IHRA definition. His arguments must be given particular weight because of his family’s history under Nazism: his mother and grandmother survived hidden in a cellar in occupied Vienna, while 39 members of their family perished in Auschwitz and Theresienstadt.

In line with the statement offered by over 40 Jewish groups, he believes that the IHRA definition is a political tool that allows institutions to “intentionally equate legitimate criticisms of Israel and advocacy for Palestinian rights with antisemitism, as a means to suppress the former”.

The Canary also contacted a supporter of Palestine studying at the neighbouring University of Sheffield. They had similar concerns about their university adopting the IHRA definition:

like our neighbours at Sheffield Hallam University the university of Sheffield is considering adopting the IHRA definition. The consequences of adopting IHRA would be high for the university’s academics and politically active students… If the university was engaged in actually protecting minorities, and not just following government threats, they would make sure other minorities like their Palestinian students would not be hurt by the steps they take to protect others.

Silencing criticism of Israel within the Labour Party

Our warnings and worst fears have proven justified. The debate inside the Labour Party and the adoption of the IHRA “working definition” on antisemitism now appear to be the premise for prohibiting discussion and motions on Palestine solidarity campaigns

It seems clear that if UK universities follow the government line and adopt the IHRA definition, then the same process of silencing criticism of Israel could occur on campuses.

The statement from SHU Palestine society goes on to affirm the society’s commitment to anti-racism:

We, the undersigned, oppose all forms of discrimination and welcome efforts to combat it. It is because of our knowledge of the racist structures perpetuating violence against the Palestinian people – including our Palestinian members’ first hand experience of this enduring injustice – that our Society is proudly anti-racist.

We have actively collaborated with a diverse range of groups and individuals to tackle all sorts of ethno-religious, racial and gender-based prejudices, believing in the intersectionality of our struggles and the power in fighting collectively for freedom, justice and equality for the Palestinian people and all oppressed communities locally and internationally.

The statement finally proposes to SHU that it should adopt an alternative definition of antisemitism, proposed by Independent Jewish Voices:

Acknowledging the centuries of persecution against Jewish people and the recent rise of antisemitism, we would urge the university to adopt an alternative definition of antisemitism, such as that provided by the Independent Jewish Voices, that protects Jewish members of our community without undermining the longstanding struggle against oppression of our Palestinian brothers and sisters or endangering academic and political freedoms in the UK.

The Canary contacted both SHU and the University of Sheffield for comments regarding the students’ statements. We had not received a reply at the time of publication.

The IHRA definition of antisemitism can result in the labelling of criticism of the Israeli state’s colonial policies as racist and the silencing of Palestinian voices. Universities should heed the calls from their staff and students and reject this definition, which allows the weaponisation of a twisted understanding of anti-Jewish racism. Instead, academic institutions should listen to grassroots Jewish groups and adopt a liberatory definition which encompasses an anti-colonial perspective.