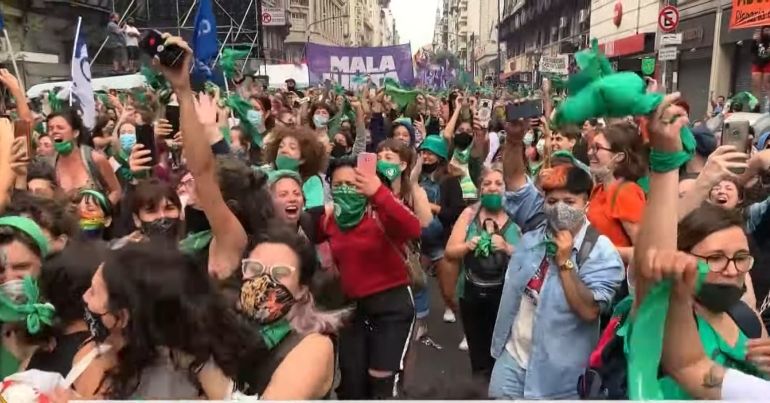 Argentina’s lower house has voted to pass an abortion legalisation bill, as campaigning for reproductive rights in Latin America increases.

The bill would allow Argentinian people to access abortions up to the 14th week of pregnancy. Currently, Argentina only permits abortions in the case of rape or if there is a health risk threatening the mother’s life.

President Alberto Fernández proposed the bill. Despite this success, it must still pass Argentina’s upper house to become law.

This is a victory for the women’s movement that’s been campaigning for this for many, many years. The fact that this bill is sponsored by the government makes all the difference.

On 11 December, the abortion bill passed the lower house by 131 votes to 117, after a 20-hour debate. The Argentine Senate will vote on the bill at the end of the month.

The conservative-leaning Senate rejected a similar bill in 2018.

The campaign for abortion legalisation in Argentina has been long and difficult, and women have been imprisoned for homicide after having miscarriages.

For Argentina’s green-wearing pro-choice activists, the bill’s progress led to celebrations in the streets:

As most of Latin America is Roman Catholic, it has some of the strictest abortion laws in the world. If Argentina does legalise abortion, it will only be the fourth country in the region to do so, after Cuba, Uruguay, and Guyana.

Some countries do not permit abortions under any circumstances, including Honduras, Nicaragua, and El Salvador.

As a result, the World Health Organisation (WHO) reported in 2017 that only a quarter of abortions performed in Latin America are safe.

In April, the UN estimated that worldwide lockdowns could leave 47 million women without access to contraceptives. As a result, it projected seven million additional unintentional pregnancies.

According to Amnesty International, coronavirus (Covid-19) has increased calls for changes to reproductive rights in Latin America.

The barriers to access range from lack of information to incorrect interpretations of the health clause of the ruling. Many consider the concept of ‘health’ as limited to having an illness but lack a wider understanding of it as including physical, mental and social wellbeing,

For women who have been in isolation with violent partners who abuse them or control their decisions, even calling for information has been extremely difficult. Strict quarantines make it difficult for women to travel. For many, if a police officer stops them and asks where they’re going, it’s not easy to say they’re going to get an abortion.

However, local activists are trying to find ways to get reproductive services to those who need it. For example, Miles, an organisation in Chile, helps arrange transport for people who want abortions to reach doctors who approve.

Amnesty International welcomed Argentina’s step towards legalisation, urging the Senate to pass the bill into law.

This is an achievement of the women’s movement and a demand from different social groups who have never given up on the cause. The Senate cannot afford to turn its back on women once again and must press forward to pass the law, without further delay. Legal abortion is an imperative for social justice, for reproductive justice and for human rights.

The debate of the past few years has been very positive and has succeeded in making visible the failure of the criminalization of women as a state policy. The Senate must now put an end to clandestine abortions. The legalization of abortion saves lives and addresses a key public health issue.